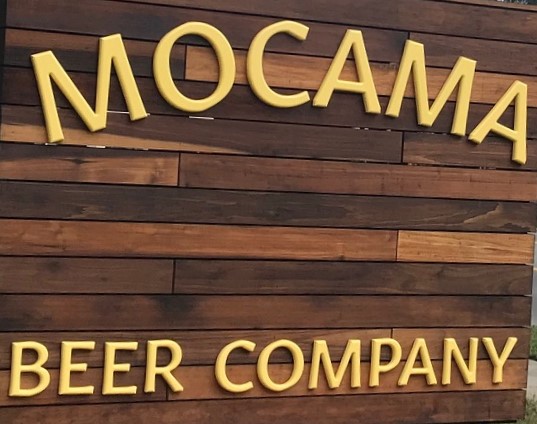 There is nothing in the world like the first taste of beer.” — John Steinbeck

And speaking of beer, there is a new kid on the block – the block that is 629 South 8th Street.
That is where you will find the Mocama Beer Company – the third brewery on Amelia Island, joining more than 300 craft breweries across the state.

Mocama Beer Company is housed in the historic building that was once home to the Lasserre Motor Company built in the 1954. The new owners wanted to stay true to its mid-century charm and that they have done. Even the slanted glass of the old showroom, a very distinctive design element was maintained making for a most inviting tap room beautifully appointed with gorgeous walnut and leather lounge furniture.

But perhaps most important to any taproom, are the taps – of which there are no fewer than 24 at Mocama.  Click here for tap list.

In addition to a meticulously restored and repurposed building, equipped with state of the art, USA-made brewing and packaging equipment, the founders of the brewery have extensive experience in brewing, hospitality, and business in general.

The team consists of four Co-Founders. Derek Imes is the CEO of Mocama, a Co-Founder and owner of Creature Comforts and prior to that a member of the Board of Managers of Terrapin Beer Company, both based in Athens, Georgia. Then there is Hamp Tanner is a successful businessman who previously owned Well Traveled Living in downtown Fernandina, J.T. Murrett is the Chief Production Officer, who relocated from Asheville, NC where he was for several years the head brewer at Burial Beer Company and last but not least is Simon Muldoon. Muldoon has been on Amelia Island for 20 years and previously was an assistant food and beverage director at TPC Sawgrass. The brewery has many local investors, and one of the first to invest was local legend and native son Larry Ogilvie, a home-brewer and owner of Advanced Muscle Therapy.

On the taproom menu at Mocama, you will find:

Pan American, an American Light Lager described as “light, refreshing, and easy drinking,” Prosim, a Pilsner that is “medium bodied with a crisp dry finish, hopped with Zuper Sazer and Grungeist [hops] imparting a big floral and slightly herbal aroma, the Autumn Lager, a Marzen that is “lagered for six weeks and boasts complex notes of caramel and toffee with a hint of biscuit,” and an imperial coffee stout known as Night Rush, “dosed heavily with Brazilian dark roast coffee, milk, sugar, chocolate malt and oats.” Mocama offers those mouth-watering beers and so many more.

Mocama is currently brewing approximately 200 barrels a month, which translates into a little over 6000 gallons. They have the capacity to grow this to 500 barrels per month before adding additional capacity. All total, the facility has the capacity to produce over 30,000 barrels a year with the addition of more fermentation tanks. In addition to draft and packaged beer to go available in the taproom, Mocama has partnered with North Florida Sales to distribute their beer in kegs and cans to area bars, restaurants, and grocery stores

Mocama officially opened its doors on Wednesday, November 4th and since then, has hosted a number of special events and off-site beer dinners, one of which was at The Golf Club of Amelia Island.

What could be described as their mission statement reads: “Finding beauty in the pursuit of perfection, our goal is to tempt and delight the senses while creating opportunities for human connection.”

At Mocama, it’s all about the beer and the people who share that passion. And, as a result of that dedication to perfection and that “human connection,” you won’t find any big screen TVs around.

Congratulations & cheers to a successful partnership!!

SO happy to see them open. I’ve watched them them carefully restoring the building..