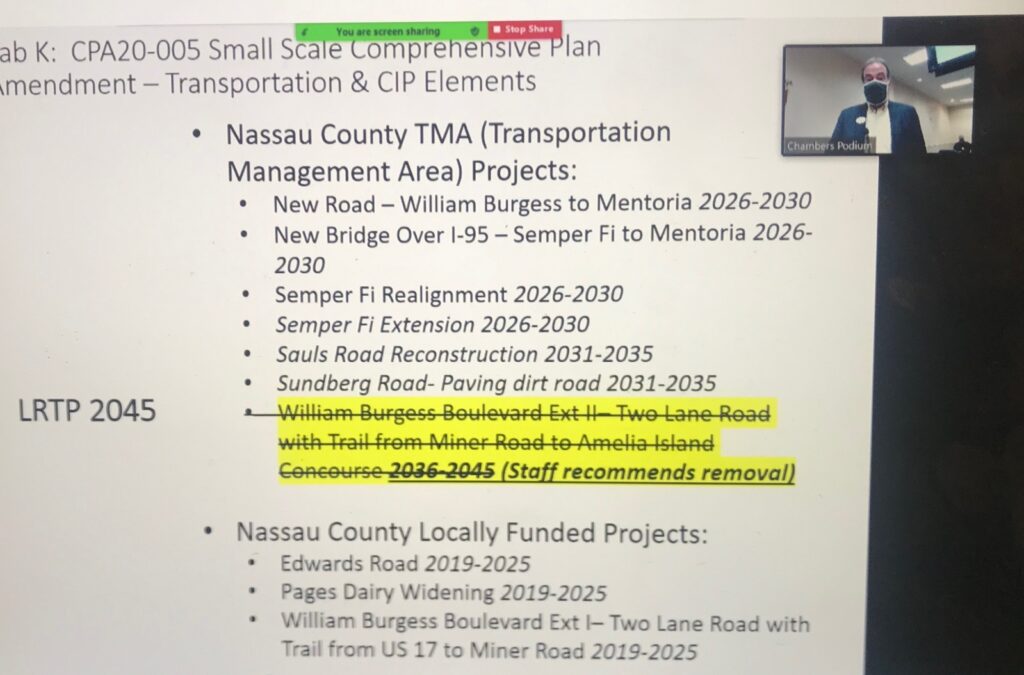 The WBD is widely viewed has representing a more modern way of going about planning and growth management – promoting sustainability, compact, mixed-use development, conservation and preservation. According to a staff report, “this district is intended to provide a variety of uses needed to support communal life within walking distance . . . intended to be compact . . . without predominant use of the automobile.”

All of that being said, however, any County plan must be in-line with state and federal plans. It does not happen in a vacuum.

Thad Crowe, the newest director of Planning and Economic Development for Nassau County, said this the most recent meeting of the BOCC, “. . . projects can take decades.”

In further describing the WBD, he said it was a project, “to combat sprawl . . . and it [the WBD] looks at the whole environment.”

The William Burgess District Vision Book, created by the staff of the Nassau County Department of Planning and Economic Opportunity, was in and of itself an award-winning document. The subsequent WBD Context and Connectivity Blueprint is intended to be the implementation tool for that vision.

The WBD is said to be a “hybrid [of code and regulations] focusing on quality, compact urbanization and multi-modal connectivity to facilitate the formation of an inclusive community where people can live, work, play and stay.”

It is the William Burgess District that took center stage for a while during the BOCC meeting of November 4, 2020.

According to the agenda, the BOCC needed to approve changes to the 2030 Nassau County Comprehensive Plan. First, to change the classification of some 437 acres. Second, to change a few transportation and capital improvement elements of the plan, and third, to rezone that aforementioned 437.7-acre parcel located within the William Burgess District.

Land use planning is most cumbersome and not intended for the faint of heart.

All went according to plan. All changes were approved unanimously.

The easy passage of the amendments was made possible in large part due to a meeting that took place Friday evening, November 5th, 2020. That meeting was held at the Journey Church in Yulee.

One might say it was a textbook example of citizens taking an active interest in politics and in land use planning, in taking pride and taking part in the process – and in so doing, making a difference.

The issue of particular interest to residents of the 639 homes located in North Hampton, with its 31 lakes, 18-hole golf course and accompanying RV and boat storage facility, was part of a proposal to build a road connecting the Amelia Concourse with Miner Road. Such a road would have divided a neighborhood, divided a popular golf amenity and angered many a homeowner who live there.

In addition to showing up en masse at a Friday night meeting at The Journey Church, (with some 70 participants), the hallway outside of Commission Chambers was also lined with residents of this popular Nassau County neighborhood.

A few citizens still entered the Chambers to have their concern and opposition made part of the official record yet any sort of ongoing controversy was avoided when it was announced by Thad Crowe, director of the Department of Planning and Economic Opportunity, that plans for the controversial road, (intended as a connector between Miner Road and Amelia Concourse) had since been taken off any plan.

The BOCC agreed and from this point forward, the Comprehensive Plan and any and all maps used in future discussions and publications relating to the Nassau County Comprehensive Plan will no longer show a proposed road bisecting the North Hampton neighborhood.

An important example of what can happen when the public becomes engaged.

What we really need is some good lighting on these roads. It is so dark on Miner, Old Nassauville, and A1A.

Great idea – as long as the neighborhood pays for it. Or are you suggesting that OPM (Other people’s Money) is a viable source of financing? That’s what they do on the northeast US (and California) and one of the reasons their taxes are so high.

HEADLIGHTS! and slow down.