Nassau Board of County Commissioners discuss COVID-19 and CARES

At the Wednesday morning (10/21/20) meeting of the Board of County Commissioners, Dr. Ngo-Seidel, Director, Florida Department of Health of Nassau County, was the first to speak. Wearing a mask while participating via ZOOM, Dr. Seidel provided her weekly update noting that Nassau County has had a total of 2,351 cases of COVID-19 (of which 167 were non-residents), 1,967 individuals have been released with 217 current active cases in isolation. At Baptist Nassau, there are two COVID patients – one in ICU (Intensive Care Unit) and the other on the floor.

According to Greg Foster, Director of Emergency Management, “Based upon daily positivity rates from March up to last week, the single day rate that was highest was October 10th 2020 and the rate was 33.0% +/-.  We also compile weekly rates which shows the week of August 22nd 2020 with a weekly rate of 11.0% +/-, the highest weekly rate.”

As to the latest safety recommendations, Seidel encourages everyone to:
• Get a flu shot before Halloween
• Plan for safer fall celebrations
• Limit exposure to crowds
• Avoid prolonged contact with others
• Wear a mask when social distancing is not possible
• Wash hands frequently
• Disinfect common surfaces

Dr. Seidel also noted that 40% of those testing positive have no symptoms but can still transmit the virus.

CARES Act Funding was also a priority item on the agenda. County Manager Taco Pope began by saying, “it’s been a journey and a challenge.” 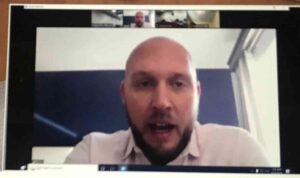 Pope added that he believes the initial goals have been accomplished. Those goals were “to aggressively but prudently pursue all of the $15 million [targeted for Nassau County] . . . trying to capture that and bring it into the County.”

To date, the County has secured approximately $6.9 million and continues to execute the Nassau CARES Expenditure Plan.

David Jahosky, of the Government Services Group (GSG), provided a summary to the Commissioners providing data on two main programs. Nassau Cares Funding for Rental and Mortgage Assistance has already distributed $250,000 to individuals with another $150,000 in process with a total of over $400,000 expected to be distributed by the end of the year.

As to the Nassau County Small Business Assistance Grant Program, the first round resulted in payments of $650,000 to 65 local businesses and the second round saw payments of $10,000 each to an additional 85 companies for a total $1.5 million being distributed to businesses across the county.

According to Jahosky, 33 applications remain. Of those, 14 are pending approval, (awaiting for a final sign-off by the County), six appear to be ineligible and 13 are still under consideration. As a result, another $140,000 in small business assistance grants is expected to be disbursed in the next two weeks.

Board action was required, however, and the Commissioners were asked to consider the following, as outlined by County Manager Pope:
• Approve the submission of Public Safety Costs to Florida Department of Emergency Management for reimbursement
• Affirm the Nassau CARES Expenditure Plan and amended line item detail and,
• Upon receipt of reimbursement for Public Safety Costs:

o Continue executing the BOCC approved Nassau CARES Expenditure Plan
o Return/Reimburse the $2.3 million taken from the Nassau County Emergency Reserves and Capital Reserves used to fund Tier 2 of the Nassau Cares Expenditure Plan.
o Create a designated contingency of $1.5 million to offset cognizant disallowance. (10% is an industry standard to provide for any “clawbacks”or disallowances that might occur. To that item, Jahosky did say that they were not expecting any such action).
o Create a designated contingency of $150,000 for five years of post-award monitoring assistance.

Commissioner Edwards made such a motion and it was unanimously approved.

One item not unanimously approved was in reference to the wearing of face masks.

Recall Executive Order No 16, issued on July 2, 2020, mandated face coverings at all indoor public spaces where social distancing was not possible. On September 24th, however, Executive Order 23 was adopted which removed the mandatory mask mandate and instead “encouraged” their use.

That order was valid for 30 days until October 23rd. As a result, the Board needed to discuss whether or not to continue “encouraging” mask usage or to reinstate the mandate.

As approved, Executive Order 24 will encourage not mandate masks. It will remain in effect until the local State of Emergency is over so the BOCC will not have to extend in 30 day increments. The vote was 3-2 with Commissioners Danny Leeper and Pat Edwards expressing dissent. It was Leeper and Edwards who voted against the mandate being lifted last month.

Get a flu shot???? There a great number of veterans who have had flu shots imposed upon them as part of their service to the country. Many of them would dissent about the wholesomeness of flu shots. Is money involved with flu shots?

How about you just go to publix, get your free flu shot and $10 gift card and calm down. The flu shot is not a conspiracy, they are proven to be safe. They help with preventing the flu but don’t stop it completely.

We should all be cautious of strategic philanthropies. Sounds like they are giving free shots and paying you $10 to do it. Why? It is like they need clients? Thanks, but no thanks. Adverse effects from a flu shot are a real possibility. Catch the flu and get over it naturally and your immune system is stronger. I have a feeling these flu shots are paid for by the taxpayer as a result of how lobbyists influence elected officials.