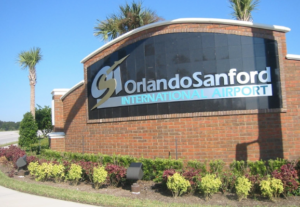 Despite assurances from Trump’s physician, Dr. Sean Conley, that Trump met Centers for Disease Control and Prevention (CDC) criteria for leaving isolation and is no longer a “transmission risk,” many medical experts doubt the president is fully recovered from the coronavirus and believe he still could be contagious and is endangering his own supporters with plans to follow up Monday’s rally with similar “2016-style” events in Pennsylvania and Iowa later this week.

Trump in a Sunday tweet later tagged by Twitter for containing misinformation, declared Conley’s memo was “a total and complete sign off from White House Doctors yesterday. That means I can’t get it (immune), and can’t give it. Very nice to know!!!”

The Orlando Sanford International Airport (OSIA) rally originally was scheduled for Oct. 2 but was postponed when the president tested positive for COVID-19 the night before. A 2016 Trump campaign rally at OSIA drew 10,000 supporters.

Trump’s campaign website asks rally-goers to register for tickets. It features this warning: “In attending the event, you and any guests voluntarily assume all risks related to exposure to COVID-19, and waive, release, and discharge Donald J. Trump for President, Inc.; the host venue; or any of their affiliates, directors, officers, employees, agents, contractors, or volunteers from any and all liability under any theory, whether in negligence or otherwise, for any illness or injury.”

Noting the White House and Trump campaign have not reached out to state or county agencies to discuss safety protocols for the rally, local public health officials are concerned it could be a “super spreader” event.

Democrats said Trump’s “pandemic road show” demonstrates he is dangerously unsuited to lead in a crisis.

“But, equally dangerous,” Biden said, “is what he fails to bring: no plan to get this virus that has taken the lives of over 15,000 Floridians under control, no plan to protect Floridians’ health care amid his attacks against the ACA, and certainly no plan to mitigate the economic impact the pandemic is having on families across Central Florida.”

At least one lawsuit asks for the rally be declared a public health “nuisance” and be cancelled.

“Trump has made numerous false statements about his condition and COVID-19 since being discharged from the hospital which will only embolden his supporters at the MAGA Event,” the suit states. “These supporters will travel to Seminole County and spread the virus as they often refuse to wear masks and take safety precautions akin to their leader.”

Uhlfelder’s suit is unlikely to be heard, much less acted on, before Monday’s rally, which, according to former Florida attorney general and Women For Trump PAC chairperson Pam Bondi, will be the first of many in Florida in the campaign’s final weeks.

The only concern I have is that John Haughey has too much time on his hands and that I wasted my time reading this garbage.

Interesting to know that 15,000 people have died of Covid 19 in Florida….and 10,000 people, willing to get the virus from this superspreader event, still believe trump’s lies.

Just what we need. Our own local Rachel Maddow spreading DNC propaganda.

Being compared to Rachel Maddow, a Rhodes Scholar and one of the most intelligent newscasters on tv, is a compliment to me. Thanks. You should watch her sometime, you might learn something.

Where is the outrage over all the violent “protests,” looting and rioting in Democrat run cities?

President Trump’sdoctor gave him a clean release- no longer contagious.

This is obviously another political stunt meant to instill fear. Like any other group event, use some common sense. Stay away if you are immune compromised or fearful.

HAHAHA you people are so absorbed in Trump derangement, that NO MATTER what he does, you find fault.

No matter where he goes, you complain.

No matter who he helps, you dislike it.

No matter the cause, even if it is your own cause, you search for reasons to object and then vilify Trump.

Don’t you see this yourself? Are you so blinded by hate that you can’t think objectively any more? Can you stop for one minute with the hatred and the criticism, to see the bigger picture?

What happened to you?

You used to be cool, man.