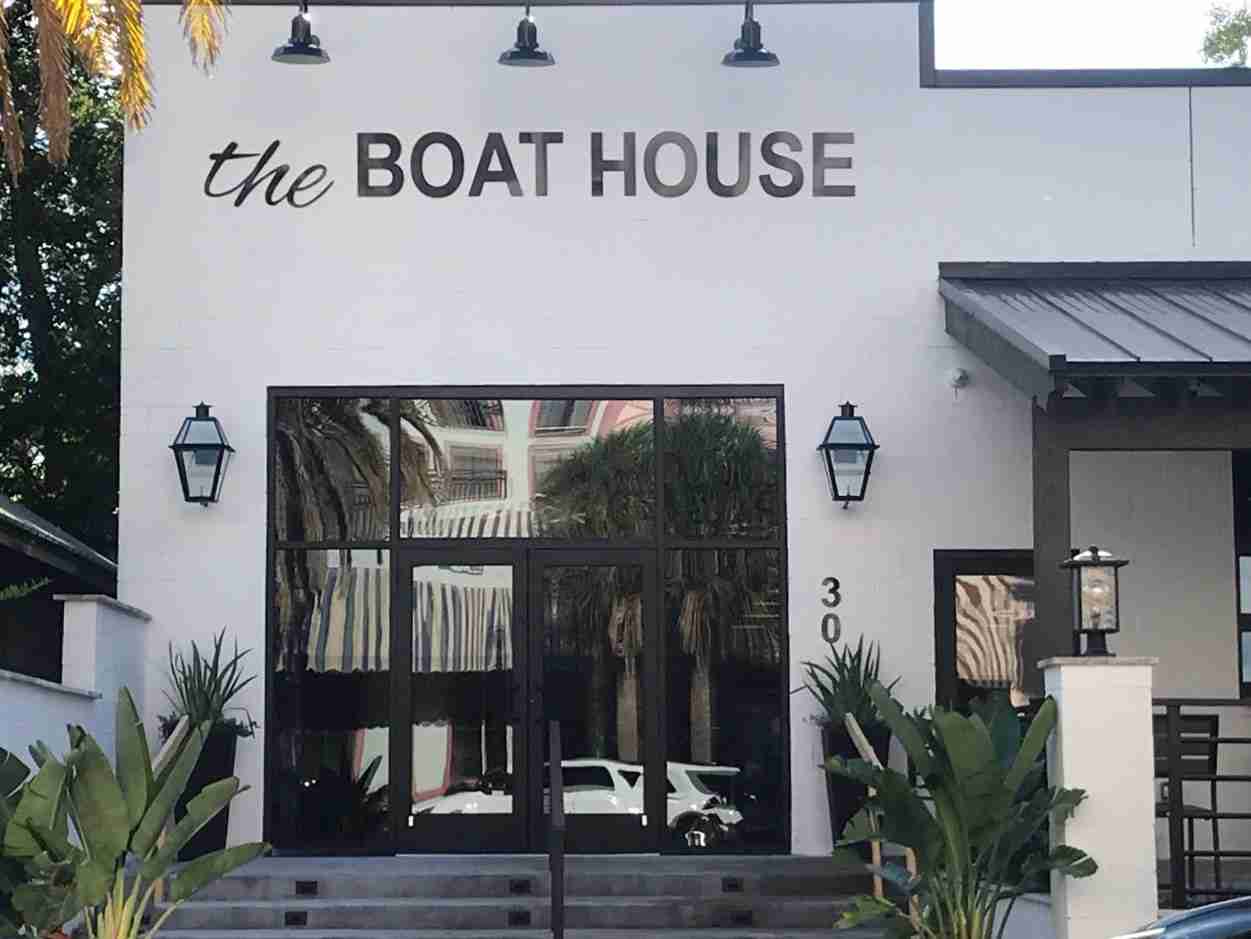 “Serving those who serve us,” was the theme of a soft opening at the newest restaurant in historic downtown Fernandina Beach. The Boat House at 30 Second Street, hosted teachers, city hall employees, police and fire rescue personnel serving up such palette pleasing samples as BBQ Shrimp with Grit Pone and Smoked Wings with Thai Peanuts and Chilis.

Sunday, October 4, 2020, was the date and the corner of Second and Ash Streets was the site of this community-minded soiree. The Boat House is a joint venture of two former high school classmates — Spurgeon Richardson III and Chet Huntley who both hail from Atlanta, Georgia, but now call Amelia Island home.

When Richardson first purchased the property on the corner of Ash and Second Streets, he envisioned a condo complex with a first floor dedicated to retail space but went that didn’t work out, Plan B became the Boat House Restaurant. It became a reality however, only because Spurgeon’s longtime friend and uber successful Atlanta restauranteur Chet Huntley, agreed to be his partner. To that point, Richardson said “The only reason I would do a restaurant this is Chet Huntley.” This is their first ever joint venture. 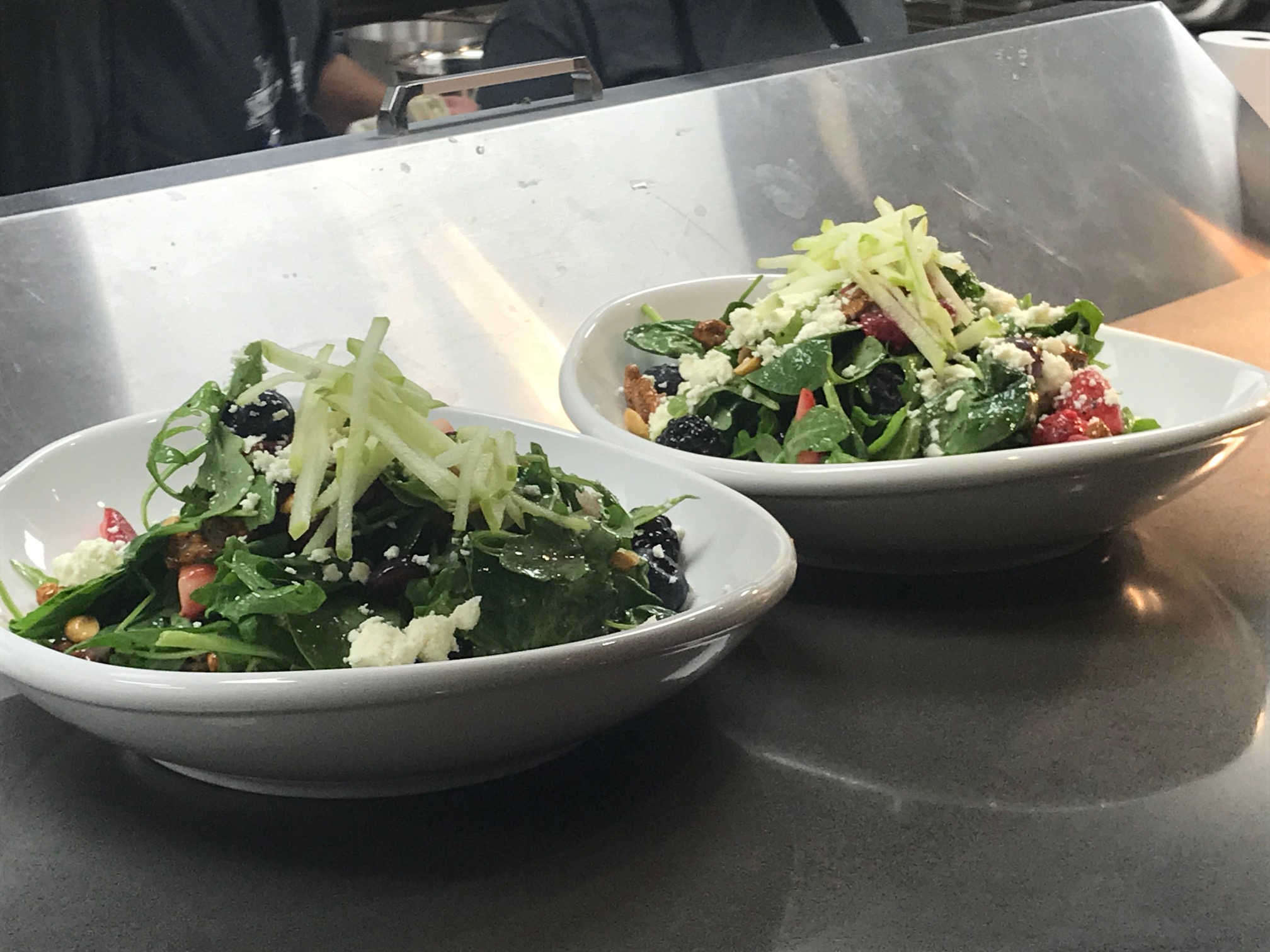 Huntley is well known in the hospitality industry having managed such well-known Atlanta eating establishments as Coast Seafood and Raw Bar, the Buckhead Diner and many, many more. So many, tin fact, that wife Tracey noted she had lost count of all his successful operations.

Spurgeon himself is no stranger to fine dining. In fact, he and his wife Frances opened Encore, an award-winning restaurant conveniently located next to the Fox Theatre in downtown Atlanta. Among other things, it was renowned for its holiday parties and made the Best of Atlanta list in 1995.

Richardson considers himself “a seasoned veteran” when it comes to dining out, something he and his wife do frequently. He says he enjoys “volume” – i.e. restaurants that provide for affordable dining experiences but also enjoys palate pleasers of the high-end offerings and both will be found on the menu at The Boat House. Affordable options coupled with pricier specialties for those who want to make an evening out more of a special occasion. There will be something for everyone — every day of the week.

Community minded and family oriented are a few other phrases to describe the look and feel of The Boat House. Richardson says he likes to “copy the best and while infusing some new ideas” and that goes for everything from floor to ceiling.

On the walls, one will find caricatures of some of Fernandina’s finest personalities and other notable quotables– including Mayor Johnny Miller, Pajama Dave, former mayor and Main Street maven, Arlene Falloff, columnist Dave Scott, Commissioner Chip Ross and Felix, the harmonica playing pineapple peddling friend to one and all.

This design element is no doubt a tip of the hat to Sardi’s in New York maybe Hollywood’s Brown Derby. They say Sardi’s starting adorning its walls with celebrity faces back in 1927.

The portraits were created by local artist, Daisy Fencik, who happens to be married to a Fernandina Beach firefighter, one of the first responders honored at the soft opening on October 4.

In addition to portraits of local celebrities, still more wall space is decorated by large black and white photographs of Fernandina’s grand past that staff from the Amelia Island Museum of History helped to procure.

Richardson and Huntley have put together an A-team for sure and are trying their best to source everything locally. Chef Jason Brumfield was most recently at The Omni but prior to that, spent time at The Cloister on St. Simon’s Island and comes equipped with quite a few ideas of his own.

When asked about the development of the menu at The Boat House, Blumfield describes it has having “as an upscale twist but in an unpretentious way.” Dishes inspired by such culinary capitals as Charleston, South Carolina, hot sandwiches that have put Tennessee on the map, mouth-watering recipes from The Big Easy . . . and with “a lot of Georgia thrown in.” Sausages sourced in Jacksonville, Red Mule Grits from Athens, GA, and the list goes on.

The Boat House has the capacity of 80 guests on the inside and another 70-90 on the outside with a team of 30 in the front of the house and another ten in the kitchen. A stage has been constructed outside and will likely host acoustic sounds on Wednesday and Thursday followed larger (and louder) ensembles on the weekends – all to be in compliance with existing noise ordinances, as Richardson ensures.

Look for The Boat House to open October 9?