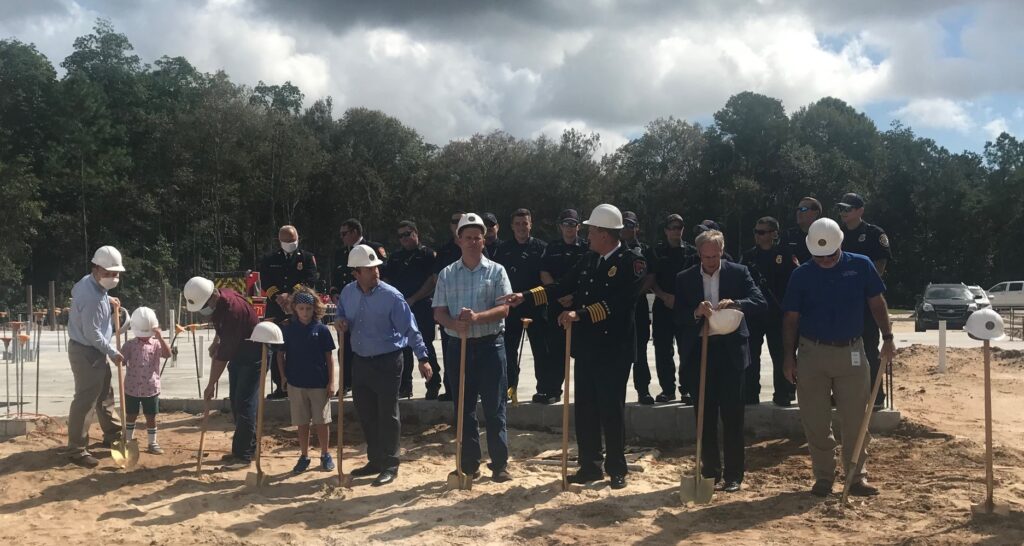 In the works since 2005-2006, a groundbreaking ceremony for Fire Station 71, built to serve the Chester Road/Heron Isles area, occurred on Friday morning, September 25, 2020. It is expected to be completed in the April 2021 time frame.

County Commissioner Danny Leeper (representing District 1) was the Master of Ceremonies. Members of the public in attendance had made comments about the heat of the early morning to which Leeper deflected in a most apropos manner by commenting something to the effect of, “if you think this is hot, rescue personnel wear 100 pounds of gear as they go running into a burning building.” Leeper also stated, “They risk their lives every day and we need to give them the best,” before turning the ceremony over to Chief Brady Rigdon.

Brady announced that Fire Station 71 will be equipped with a fire engine, a rescue unit, a tanker and possibly a Battalion Chief from Station 30. In outlining a few statistics, Brady stated that in 2019, Nassau County Fire and Rescue responded to 9,553 calls of which 852 were in the immediate area of Station 71.

Station 71 will be the eighth fire station in Nassau County.

Before the breaking of the ground, Jay Chung, President of the Core Construction Company of Jacksonville (responsible for building the station) proudly proclaimed that Station 71 is a “state of the art facility . . . which will serve the community for many years to come.”

Where is the building site for the new fire station located?