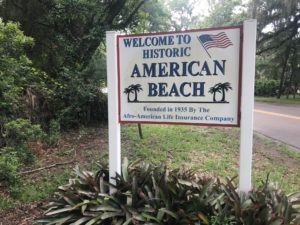 History was made in 1934 when Abraham Lincoln Lewis founded American Beach.

The president of the Afro-American Life Insurance Company and Florida’s first black millionaire wanted to provide his Afro-American employees with a place to enjoy the sun and surf because, in those days, during the Jim Crow era, blacks were not allowed on most of the area’s beaches.  From that point forward, American Beach became known as the place where African Americans could enjoy “Recreation and Relaxation Without Humiliation.”

History was made in 1964 with the enactment of the Civil Rights Act.  It desegregated not only the beaches of Florida but each and every beach across the country – and oh so much more.

With that, and with so many more opportunities now available, American Beach became a less popular destination location.

1964 also saw the massive devastation resulting from Hurricane Dora.  The enclave known as American Beach suffered massive damage, much of which has never been repaired or replaced – even to this day.

History was made in 2002 when American Beach was listed as an historic site by the National Register of Historic Places. That special designation came about as a result of the efforts of Abraham Lincoln Lewis’s granddaughter MaVynee Betsch, affectionately revered as the “Beach Lady.”

History was also made on August 24, 2020 when the Board of County Commissioners agreed to establish a special district to be known as the American Beach Water and Sewer District — a critical step needed to bring this historic area’s infrastructure up-to-date.  (Most residents at American Beach still rely on private wells and septic tanks).

Said Commissioner Aaron Bell, who represents District 2 which includes the American Beach enclave, “This has been a long time coming.”

That sentiment was expressed by many of the speakers on the night of August 24th, perhaps best articulated by Judge Henry Adams, a current resident of American Beach and past president of the American Beach Property Owners Association.  He talked of trying to get water and sewer service to the neighborhood in the past — back in 1990 and then again in the 2001-2003 timeframe.  Those efforts failed.  During his time at the podium, he shared that he swore back then he would never try this again.  “But here I am.”

Tony Nelson, another long-time resident of American Beach said, “This is long overdue,” and Tony Brown, a well-known “practitioner of community development” applauded the efforts of County staff and gave his full support.  And another resident proclaimed he too was “in full support of creating a Water and Sewer District for American Beach” believing that it would put “American Beach in the future.”

Joyce Jefferson, current president of the American Beach Property Owners Association, read aloud a resolution approved by the group expressing its full support and promise of complete cooperation for the creation of a special Water and Sewer District.

Establishing this special district helps qualify American Beach for significant monies at both the state and federal level which will help finance the upgrade of the area’s dilapidated water and sewer system.

In addition to supporting the creation of the American Beach Water and Sewer District, which will be governed by the Board of County Commissioners, the desire for a community advisory board was also a common refrain.  That too has been achieved.

Such a community advisory board will be established within 60 days and will be comprised of five members, all to be property owners living with the boundaries of the special American Beach Water and Sewer District.

Another important sentiment expressed during the public hearing was “This is an Island issue, not [just] an American Beach issue . . . it is also an environmental issue and a health and safety issue.”

To that point, Thad Crowe, County Director of Planning and Economic Opportunity, in an earlier email communique affirmed that “In multiple community surveys, water and sewer service has been ranked as one of the highest priority improvements desired by residents.”  Crowe went on to say, “The County has to consider environmental impacts of retaining septic systems. There is considerable evidence that septic tanks run risks of contaminating soils and wells, especially during heavy rainfall and periods of standing water, which could result in environmental damage and health impacts.” 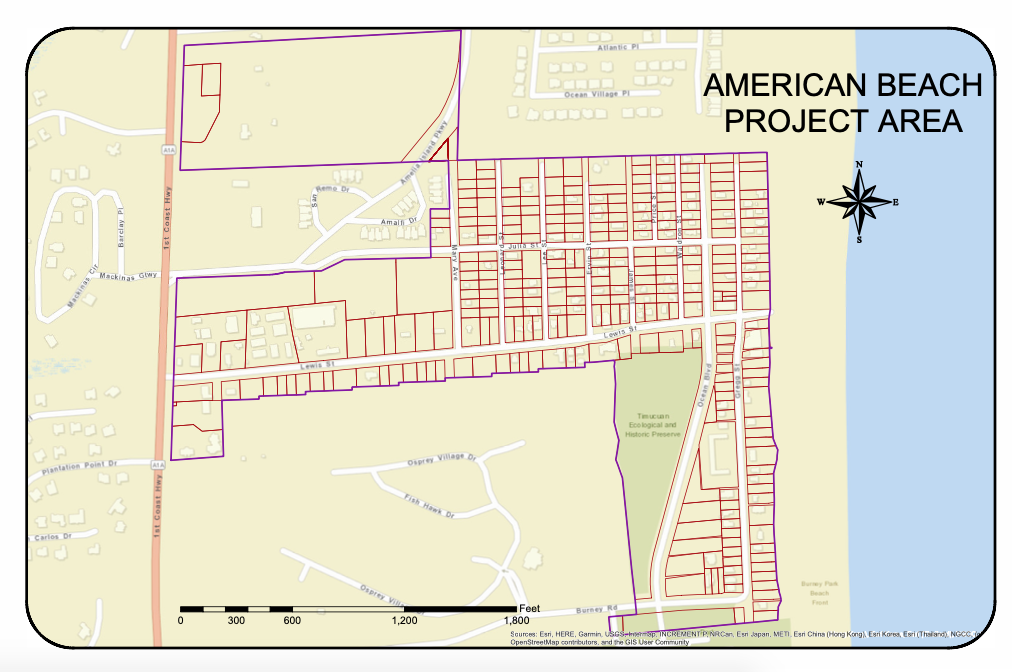 Even with state and federal assistance, if attained, the project is expensive.  Crowe addressed the issue of financial impact and noted, “The County is also concerned about the costs to property owners. The infrastructure is expensive and the County wants to reduce the cost burden on residents as much as possible.”

As to next steps, Crowe explained, “There has been no decision made yet by the county as to whether to move to final design or construction of the project – merely to submit the initial application to the Florida Department of Environmental Protection for funding consideration.”

To learn more about the history of this issue, take a look at some past articles contained in The Fernandina Observer.

While a step forward with regards health issues, the financial impact is likely to be daunting to many residents. An earlier presentation indicated that residents will still have to pay approximately $8,000 upfront with an annual assessment of $800. Additionally, the owner would be responsible for their side of the connection which would be approximately $5,000. Hopefully there would be some grant money available to assist those with financial need.

Of course there is the concern that while the water/sewer connection has been a significant barrier to the redevelopment of the AB community; but what kind of redevelopment will take place? Will it be more like the large oceanfront houses built on Gregg Street or the smaller family houses throughout the community?

In regards to the National Register of Historic Places, American Beach was places on the NRHP through the hard work and efforts of the members of the American Beach Property Owners’ Association under the leadership past president Annette Myers.

Here we go! Thanks for all of your efforts to bring fresh water To American Beach. Get ready to for the influx of buyers. Which is a good thing if that is what you want.