CARES funding for Nassau County: confusing for many

“Clear as mud,” is a well-known and often used cliché to describe something that is anything but “clear.”  It also happens to be a phrase uttered during a recent meeting of the Nassau County Board of County Commissioners — and with just cause.  It was used during a discussion of the CARES Act funding.

Despite the incredible work done by the Government Services Group (GSG), its community partners (including Constitutional Officers, Municipal Governments, the Chamber of Commerce, the Small Business Development Council, Not-for-Profits and County staff), how the CARES Act funding works in general remains a tad confusing to all but those who are closest to it. 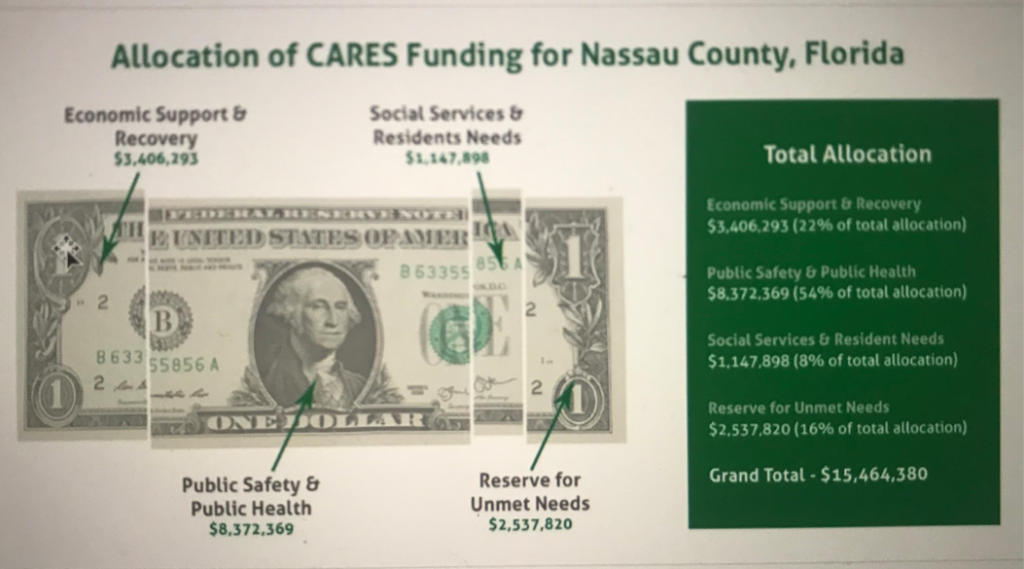 There are different tiers of services, different rates of reimbursement, pages upon pages of statutory and administrative requirements and a handful of entities involved in oversight.

The best source of information is the County website.

Go there and go often.  There you will find reports, status updates, applications and details on the various processes and procedures.

That being said, this article will attempt to simplify things just a tad more.  Here goes.

On March 27, 2020, the Coronavirus Aid, Relief and Economic Security Act was signed into law. Now known as the CARES Act, it provides federal money, $2.2 trillion to be exact, in the form economic relief to states and local governments.

Florida’s share of that money was $8.3 billion.  Of that:

(To complicate matters, however, are monies provided to other agencies — like the Florida Housing Finance Corporation (FHFC) – separate and distinct from monies received by Nassau County).

The first disbursement of approximately $3.9 million (which represents 25% of the total for which Nassau County is eligible) has already been received by the County.

The remaining monies ($11,598,285) will be distributed on a reimbursement basis.

Therein is a major concern.

In past emergency situations, like Hurricanes Matthew and Irma in recent memory, the Federal Emergency Management Agency (FEMA) received criticism for not reimbursing in a timely manner . . . or not reimbursing at all.  That criticism was delivered from many communities across the nation – not just Nassau County.

Despite the fact that Nassau County did everything by the book as did the City of Fernandina Beach.

The money in question refers to the remaining $11.6 million for which Nassau County is eligible.

What municipality, what Constitutional Officer . . . what non-profit can afford the expenses incurred as a result COVID-19 — something never ever experienced before?

Much care and coordination has gone into the development of the Nassau CARES Plan, most notably due to the hiring of the Government Services Group, (GSG) but a risk remains.

OMB (Office of Management and Budget Director) Megan Diehl has offered a few suggestions, including the use of Emergency Reserves.  That account currently houses about $7.5 million.  But as Ms. Diehl noted “it’s still hurricane season and additional monies to the Emergency Reserves have not been added to the FY 2020-2021 proposed budget.”

Another option to “front” monies might be the Capital Reserve Fund.  It is which comprised of three separate taxing funds.  Add to that option for money is an option to take from the County’s Enterprise Funds.

Ms. Diehl responded to an email on Thursday, August 6th, by saying, “There are some constraints associated with some of the potential options I mentioned . . .  We will be presenting a more complete picture of the financial options to the Board at Wednesday’s [August 12th] meeting.”

Getting relief to those who need it most remains a very complex and time-consuming process.

Be sure to check the County’s website for the latest information.