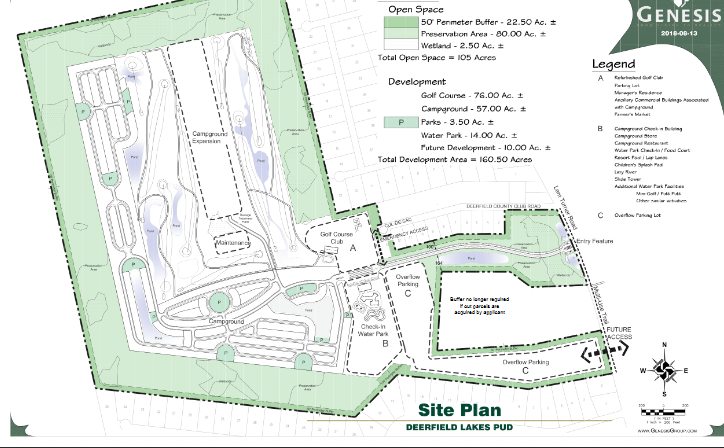 A new campground and a water park. And it comes with an estimated 25 jobs on site, up to 422 jobs off-site and a combined economic impact of $12.6 million.

It’s been in the making for a few years now and will be located on a 265 acre parcel (which now houses a defunct 18-hole golf course, among other things) on Lem Turner Road in Callahan.

Angel Lakes Gated, Inc. is the developer and Kenneth Greene its president. At one point during the meeting on the 16th, Mr. Greene stated, “I’m building this for Callahan.”

The project started well over a year ago and began with a community meeting in Callahan which attracted between 40-50 individuals. This fact was noted by Wyman Duggan, the developers’ attorney who is associated with the law firm of Rogers/Towers.

Over the years complaints and concerns about the project have related to adequate buffers, traffic patterns, drainage and a few other generalized comments which perhaps can be best summarized by the common refrain “not in my backyard.”

All of those concerns seem to have been addressed adequately and as a result, on July 20, the Commissioners gave their blessing to the Callahan development with a unanimous vote of 5-0.

Planned for this parcel (located on the west side of Lem Turner Road between Lawhon Road South and Dornbush Road) is a campsite for “up to 450 recreational vehicle (RV) slips and cabins; active recreation, including a 9-hole golf course; miniature golf; water park; play fields, tot lots, and other open space.”

The report prepared by County staff goes on to recognize a few supporting uses [which] may include an operational office, a clubhouse for guests and/or a restaurant; a small convenience store for guests; [an] outdoor/farmers market and an on-site residence for the manager of the facility.”

Many may recognize the address as serving as the site of the Deerfield Lakes golf course and country club.

Planned development, according to county staff, will occur in three phases and those phases are divided into five-year increments beginning in 2020. According to plan, 150 campsites will be added per year with the waterpark completion scheduled for 2030.

If this will cut down on a lot of crime, then let’s go for it.