General, Things to do

You can help remove a coastal Invader: Russian Thistle 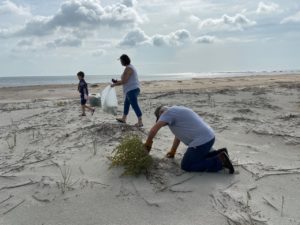 There’s a silent invader slowly spreading among our beaches. It disturbs the local shorebird nesting areas and can impact sea turtle nests too. Recently, its silence has been broken and volunteers have been working diligently on the island to remove it. 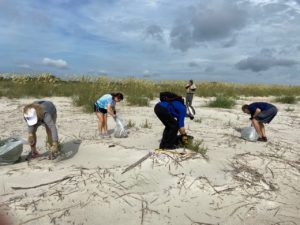 You may have been pondering why this prickly plant is called Russian thistle? Well, it originates from Russia and Siberia. Related to tumbleweed iconic to the West, this coastal version is a closely related subspecies. It was originally introduced by agriculture as a potential forage for cattle in the mid-west. Unfortunately, due to its prickly nature, cattle don’t have much interest in grazing it. Here in Florida it sprouts up along the beaches beginning in March and by Fall it begins to transition from a green to reddish color. In the last stage it looks dried out, similar to a tumbleweed. In this frail brittle state, its break off tumbling across the sand dunes spreading over 100-200,000 seeds. The seeds lie dormant during winter and the whole cycle begins again.

If you would like to become a Russian Thistle Wrangler and help us scout and remove this plant, contact Justina Dacey at jdacey@ufl.edu .

It would’ve helpful if you posted some pictures of what it looks like.

Google is your friend: https://www.nazinvasiveplants.org/russian-thistle