A vanishing way of life 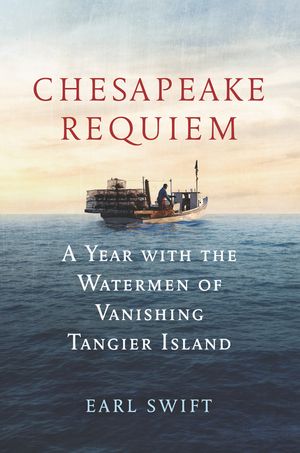 Emily Dickinson wrote “there is no frigate like a book.” It’s a line I’ve thought about a lot. Books can take you many places and show you many things. It can also give you insights into other lives and other times.

I moved here from the Maryland suburbs of Washington, D.C. As a Marylander, I was familiar with the Chesapeake Bay. I’ve sailed on it, driven over it, and played on its shores. That motivated me to buy a recent book about the people who live on the Bay.

“Chesapeake Requiem” is written by an author who spent a year on Tangier Island in the Virginia part of the Bay. Earl Swift was interested in this island and its people because he believed that theirs would be the first American community to lose its home to rising sea levels.

Tangier Island is one of the prime crabbing grounds on the Bay. Islanders are mostly crabbers, out on the water chasing the catch in all weathers. Over the years, the island has dwindled in habitable ground and population. The people who live there are a close-knit community of families interrelated to each other. Summer brings tourists to the island but the rest of the year, these families form a strong community.

To be blunt, this book may tell you more about crabs and crabbing than you ever wanted to know. But if you bear with it, it also gives you a perspective on how the islanders have formed their opinions. We mainland folks may wonder why the islanders don’t believe that sea levels are rising. And they don’t but it’s not because they are too slow to get it.

A waterman knows the sea and the land are always in conflict. Storms tear away parts of the shorelines. If you grew up, as I did, on a large body of water, you saw this fight between land and sea every day. To the watermen of Tangier Island, this is just part of the rhythms of the Bay.
Global warming, rising sea levels just aren’t in their understanding of nature. To them, the solution is to surround the Island with a sea wall as the State of Maryland did on Smith Island north of Tangier.

“Chesapeake Requiem” is in one sense an elegy for a way of life. But it also shows that people who don’t “get” it aren’t slow or stubborn. The book brings home the fact that we are all creatures fashioned by our history and our community. When we want to make someone with a different history and community understand, we need to go to where they are and find words that resonate with them. It may not be possible but using our words will never work.

”Books are the carriers of civilization. Without books, history is silent, literature dumb, science crippled, thought and speculation at a standstill. Without books, the development of civilization would have been impossible. They are engines of change (as the poet said), windows on the world and lighthouses erected in the sea of time. They are companions, teachers, magicians, bankers of the treasures of the mind. Books are humanity in print.”

“Books are your friends.”