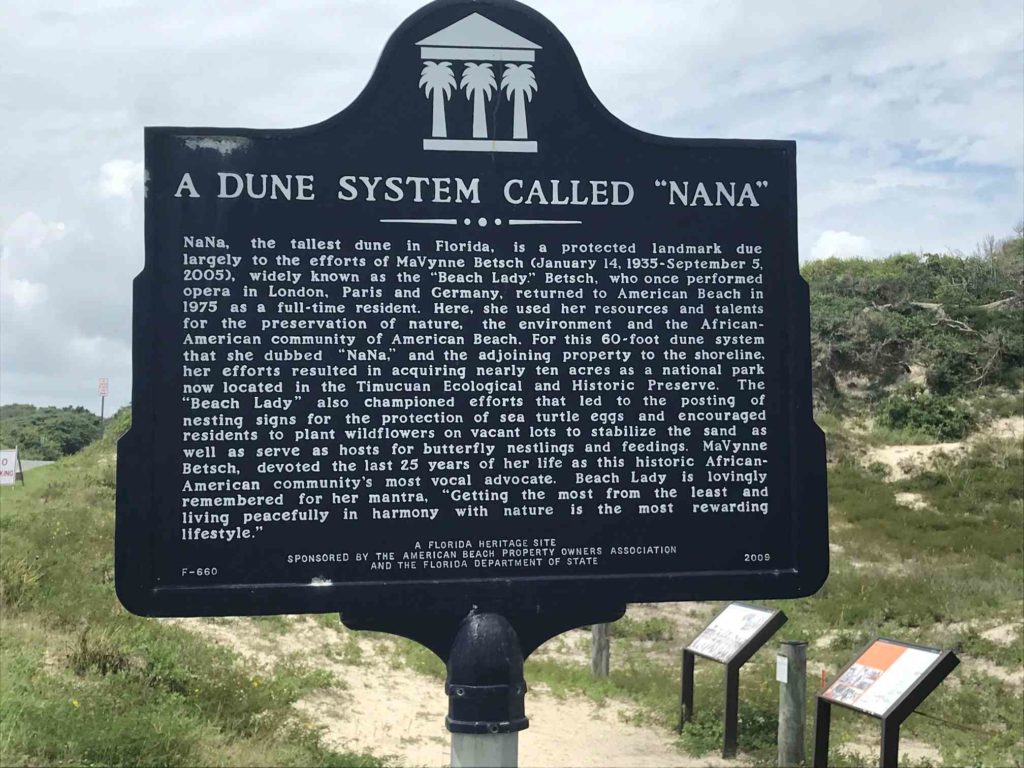 Here in Nassau County, such a fight has taken hold once again on the south end of Amelia Island. This time around, it is the NaNa dune system that is under threat. Located in historic American Beach, NaNa is the tallest in the State of Florida.

NaNa is a landmark due largely to the efforts of MaVynne Betsch, often affectionately referred to as the “Beach Lady.” It was Ms. Betsch who named this 60-foot dune system “NaNa.”

As a result of her efforts, there is a historic marker in place at the site and NaNa and it is officially part of Timucuan Ecological and Historic Preserve (under the jurisdiction of the National Park System).

That jurisdiction offers some protection from development pressures. However, there is another part of that dune system that has been known as Little NaNa. While there is no fence line or anything to distinguish where NaNa ends and Little NaNa begins. . . Little NaNa has no protected status whatsoever.

Consequently, just a short while ago (first reported in March of this year), surveying stakes appeared in and around the area. And then, an item appeared on the June 2, 2020, agenda of the Nassau County Development Review Committee meeting (the DRC). Said item was described as a pre-application hearing for the development of three parcels on Ocean Boulevard in American Beach. Ocean Boulevard is the location of the NaNa dune system.

Enter the Amelia Tree Conservancy (ATC). In a communique sent to their members, it was explained that “these parcels [under consideration] are the most important three of six parcels that are part of the remaining NaNa dune system.”

That letter went on to explain:

. . . part of the Natural Legacy of Nassau County and the history of American Beach. They are forested parcels that contribute to the protection of the island from erosion, flooding, storm winds and heat island effect. These parcels provide habitat for gopher tortoises and other wildlife and are part of a wildlife corridor. 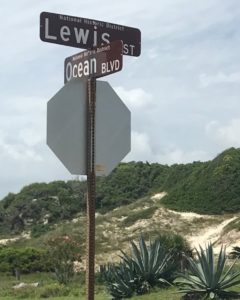 The ATC rated these parcels #2 on their list of protection priorities – second only to the 50-acre Riverstone parcel – also located on the south end of the island.

The members of the ATC issued a “Call to Action” and their members conservationists around Nassau County made their positions known. A passionate, letter-writing campaign ensured directed to members of the Board of County Commissioners and key staff.

It worked. That item was pulled from the agenda – indefinitely.

When reached after the change in the agenda, Lyn Pannone, Vice Chair of the ATC had this to say, “In the best-case scenario, the county or perhaps North Florida Land Trust will be able to preserve it. Alternatively, either the state or national park system acquiring it would also be a win for the island. Amelia Tree Conservancy is closely monitoring what happens and we will do whatever we can to have these fragile parcels preserved.”

Please tell me how to join. I’m tired of reading of the destruction of AI.