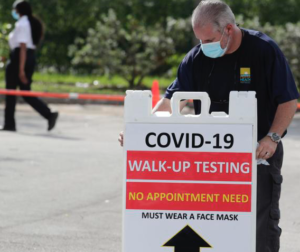 (The Center Square) – Florida could see nearly 8,000 COVID-19 deaths by September, including more than 2,000 in August, according to a “cumulative death forecast” by an independent model that is among 16 aggregated by the U.S. Centers for Disease Control and Prevention.

According to an update posted by the COVID-19 Projections model, built by Massachusetts Institute of Technology graduate and independent data scientist Youyang Gu, a second wave will increase Florida’s COVID-19 deaths by 40 percent in August, from an estimated 5,754 deaths Aug. 4 to 7,797 by Sept. 1.

Gu’s update Wednesday is contrary to a Tuesday update posted by the University of Washington-affiliated Institute for Health Metrics and Evaluation (IHME), which predicted 3,899 COVID-19 deaths by Aug. 4, a downward revision from its previous estimate that 5,440 Floridians would die from the disease by early August.

IHME’s Tuesday update was its second revised forecast in a week to project declining COVID-19 deaths in Florida. On May 20, it projected 4,720 COVID-19 deaths by Aug. 4.

As of Thursday afternoon, the Florida Department of Health’s (DOH) COVID-19 dashboard reported 2,364 deaths in the state attributed to the disease, with 53,285 people testing positive for coronavirus. DOH added 45 reported COVID-19 deaths to the state’s toll Thursday and an additional 651 cases.

The state’s deadliest day remained May 4, with 59 reported fatalities. The state has been averaging 36 deaths a day for a month, indicating deaths, and case counts, have flatlined but not significantly declined.

IHME’s model included high and low ranges, projecting up to 72 Floridians could die daily or daily deaths could be single-digits or nil by August.

IHME’s model and Gu’s COVID-19 Projections model both have been praised and utilized by the White House Coronavirus Task Force.

Gu’s updated model predicted a second COVID-19 wave could kill 76 Floridians a day in mid-August. Its upper and lower spans ranged from 253 deaths per day to the single digits.

“Note that our projections are not set in stone,” Gu said in a Tuesday tweet. “My hope is that people will use our projections and take actions to actively reduce the spread of the virus. There is still time to impact the future.”

Gu’s model estimated the virus’ “reproduction number,” which is “the average number of new people infected by one infected individual” since March.

In its Tuesday update, Florida’s “reproduction number” was 1.07 statewide, which means infections are on an upward trend. It said 5,000 Floridians were infected Tuesday.

At that 1.07 reproduction pace, the number of new cases in Florida would peak in mid-July, when an estimated 10,112 people, including those not tested, would be infected each day.

Unlike IHME’s newer models, Gu’s forecast did not include nuances in state-by-state policies, such as Florida’s nursing home visitation ban and a requirement that hospitalized nursing home and long-term care patients not be returned to former residences but to facilities outfitted to handle COVID-19 patients.

Gov. Ron DeSantis has expressed frustration with many of the models, including one published March 16 by the Imperial College London that projected 2.2 million U.S. deaths from COVID-19.

“What I have found on these models is they have assumptions that are totally unreasonable with no appreciation for how different states are doing this,” DeSantis said in early May. “You take a look at what Florida is doing versus other states and, obviously, I think it makes a big difference.”