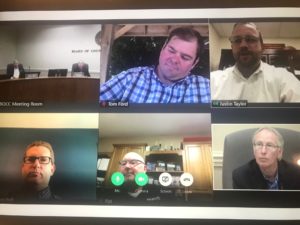 This morning, by a unanimous vote of 5-0, County Commissioners gave approval to a plan that would re-open County-controlled beaches, with restrictions on May 6th. Stretches of beach from Peters Point down to the Southend Walkover at 8014 First Coast Highway (including Burney Park and the Scott Road access area), are recognized as beach front parks under the purview of the County.

County Manager/County Attorney Mike Mullin outlined the restrictions which will be in place when the beaches re-open on May 6th. Those restrictions will include:

Before listing the prohibitions, Mullin noted that while there are many things the County can do, there are other things that it simply cannot do. For instance, while the number of people on the beach can be somewhat controlled by the capacity at beach parking areas, the County cannot restrict beach access to county residents only.

It was expressed that the County hopes that the City of Fernandina Beach will open their beaches in coordination with the County. Law enforcement and emergency operations management have been involved in the development of this plan. Greg Foster, Director of Emergency Management, noted that Brevard County has had similar limitations in place (restricted hours and activities) and it has worked well.

For now, and the foreseeable future, the beach areas at Fort Clinch and on the South End of the Island will remain closed as they are part of the State Park System.

The subject of mental health came up numerous times during the discussion. Commissioner Thomas Ford stated that “folks are getting pretty restless,” and Commissioner Justin Taylor noted that domestic violence calls are up. Commission Chair Daniel Leeper pronounced that “this is an effort to put some normalcy back into the lives of our residents.”

Please keep our beaches closed from Peter’s Point through N.Fletcher…We don’t need the nightmare of mass humanity swamping the beaches. It simply isn’t the right time. We can hang on as a community for as long as necessary. Our little island is doing it’s best to keep the virus down….with approximately 45 cases, and no reported deaths, that’s remarkable! Keep up the good work Fernandina !

so no one has died. how long should they be kept closed? until someone does die? or until no one ever dies?

your answer doesn’t matter…the question was rhetorical. everyone who doesn’t want the beaches open can stay home. that’s your right. the rest of us can live our lives. that’s ours. you don’t get to choose for everyone.

The closing of the beaches have become a symbol of government control and many would say “overreach”. There was absolutely no reason to close any public parks or beaches as there is plenty of room to social distance and if someone is at high risk then they can choose not to go. Same with our businesses and restaurants. Let those who would like to take the slight risk and continue to WORK and feed their families as well as go to restaurants and retail shops do so. Who is anyone to say what is essential and what is not? Should it be a crime for my hairdresser to cut my hair even at home? Why can we play golf but surfers and beach goers can not do what they love? The virus isn’t going away.

There are two America’s here…those who have wealth, savings, government jobs, and/or pensions. I’m very happy for you who have worked hard, planned, saved, or were just plain lucky! Now stay safe and distant and let the rest of us get back to work and continue to do what we love to do!

Well said Jason! The virus is part of humanity now. We will live with it or not, keep yourself and loved ones safe and let the rest of us walk the beach. My vote is open FB’s beaches in accordance with Nassau County’s guidance, just as was proposed to our commissioner in March when this all began. Hopefully it will be considered without bias this time.

“Walking, running, fishing and physical activity will be allowed

• No sunbathing or items that create a stationary presence will be allowed – i.e. no blankets, no coolers, no chairs, no tents or umbrellas”

If “Brevard County has had similar limitations in place (restricted hours and activities) and it has worked well” why are we waiting two weeks to put the same plan in effect here?

Leave the beaches closed until the Doctors say it is safe.

Please consider adding 6-8PM for those having essential jobs and now working 8-5PM jobs attempting to keep the county running. Also children homeschooled and behind a computer most mornings required to do schoolwork. A retired elementary Principal.

Please consider adding 6-8PM for those having essential jobs and now working 8-5PM jobs attempting to keep the county running. Also children homeschooled and behind a computer most mornings required to do schoolwork. A retired elementary Principal.

City Commissioner Ross stated “The more people arriving at this time, the higher the chance of spreading Covid-19 in our community. And reopening the beaches will most likely draw a large amount of people to the island.” And from the New York Times: “Until there is a vaccine or a cure for the coronavirus, the macabre truth is that any plan to begin restoring public life invariably means trading away some lives”. What are the county commssioners thinking – that sick or dead is better than “restless”??

So it’s okay to go food shopping, go to Walmart, HomeDepot, Lowes, buy gas or take out food. But not walk in the open air with social distancing? Is this your point Annie? No one is holding a gun to any one’s head to go out for a walk on the beach. Just remember to wash your hands, wear a face mask, drink fluids, and take some vitamins – D3, C, Zinc.

Let’s not limit the hours of beach opening. This will compress the people into a shorter time (more dense crowds) rather that giving people more hours to social distance. In light of the white house presentation yesterday. COVID-19 has a harder time spreading with heat, humidity, and sunlight. Let’s open the beaches for daylight hours (longer hours for full time workers is a great idea) and allow seating with no more than 4 people in a group for now. Those with limited mobility should still have the opportunity to sit on the beach.

It is also smart to only open portions of the larger parking lots to limit crowds.

Our beach will likely be less crowded than Publix, Harris Teeter, Lowes and Walmart.

As usual, I am in total agreement with Nancy. (Anne, who I do not know personally, is also right on in my humble opinion).There are already no lifeguards to protect the public employees from unnecessary risk. In the original article it was noted that similar guidelines in Brevard County “worked well”. What is the definition of that phrase? Working well would mean no uptick in community spread of Covid, which, of course would not even be measureable until at least a week before symptoms might appear and even then there would have to be testing to really confirm anything.

Of course, everyone (except perhaps an extreme agorophobe

) would wish that such restrictions were unnecessary! But the argument that “everyone” needs to return to some “sense of normalcy” is fallacious. Walking on the beach is not a need, but a want! Restocking ones food supply during a pandemic does seem to qualify as a necessity. Even walking around one’s neighborhood for exercise seems a reasonable compromise, as it is unlikely that a multitude would be doing so at the same place at the same time and it is easier to maintain assured clear distance.

Once again, it appears that our county officials are prioritizing individual preferences and avoiding the political fallout from constituents who can’t accept the merit of these restrictions strongly urged by the medical experts over the general public safety and welfare.

Moreover, the “success” of relaxing restrictions while attempting to maintain adequate safeguards is only as likely as each individual being responsible enough to follow the guidelines. But sadly this does not appear to be the way things go, especially without enforcement! In this situation, “one bad apple” can ruin the whole barrel and we won’t even be able to notice the rot for another few weeks!