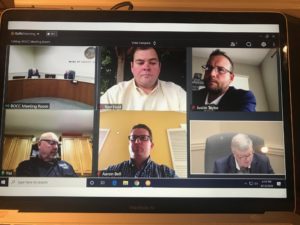 Available for public viewing via live streaming on the Nassau County website at www.nassaucountyfl.com, the Board of County Commissioners held their first regular Monday night meeting for the month on April 13, 2020 beginning at 6PM. (Historically, meetings are held on the second and fourth Monday at 6PM and the third Wednesday at 9am).

Seven consent items were approved unanimously followed by a brief discussion regarding the potential acquisition of 36.21 acres of vacant land on River Bluff Drive in Hilliard. The Commission is interested in purchasing this waterfront parcel with the intent of using it as a Regional Park. The most recent appraisal came in at $970,000 but the owner has indicated he would be willing to sell it to the County for $875,000. Monies to purchase this parcel would come from impact fees and impact fees only.

Using one of the new tools available made possible as a result of a recent massive technology upgrade, one resident had earlier submitted a letter and those comments became part of the public discussion. This service and opportunity is afforded to all residents of Nassau County and can be accomplished by “phoning-in” comments to 904-530-6009 or by sending an email to comments@nassaucountryfl.com.

The resident who contacted the BOCC about this issue believed the price of the property was a tad out of line with other available acreage, believing the asking price to be almost three times the price of other parcels in that area. According to the background material provided, “The property has 450 linear feet of frontage along the St. Mary’s River with mature, hard-wood trees and native vegetation. In addition to being aesthetically pleasing, the property has historical significance as it once contained the “little mill” owned by Jackson and William Mizell in 1870, as well as the docking facilities for the ships which carried finished product around the world.”

The individual went on to suggest the issue be tabled until other locations could be identified and evaluated.

According to the preliminary agreement with the seller, four months would be granted to allow the County ample time to do its due diligence. Commissioner Thomas Ford spoke to the point that “there is a lot more to recreation than just ballfields,” and made a motion to move forward with due diligence noting that four months is more than ample time to find any deficiencies. Commissioner Pat Edwards seconded that motion and it was approved.

Another item on the agenda for which adequate information was not available related to a proposed transfer of money from the BOCC to the Sheriff’s Office. The purpose being the construction of a Public Safety Training Center. Commissioners wanted a total cost estimate and an estimated date of completion. Without such info at their fingertips, the Commissioners moved to postpone consideration until all data has been received.

Contained in background material, was this: “In May 2015, the Board entered into an agreement with the United States Marshall Service to house federal detainees. In January 2017, the Board approved to [move] those funds from the General Fund Reserves to Capital Projects Funds for funding of a Public Safety Training Center on forty (40) acres of property owned by the Board off County Road 108.”

Would it be possible to transfer the Federal Inmate Account balance over to the Sheriff’s Office as we are starting to move forward on developing the Public Safety Training Center? The County recently did the same with the balance of the SO’s building fund in order for us to move forward with our storage building that we have been trying to complete for nearly three years now.
Since the transfer of those funds, we have begun moving along quickly on that project, as we have already secured the bids and contracts for completion, with the county’s approval, and will hopefully start the project within the next week or so. When it is finished we will be saving nearly $300,000 from the original county bid proposals that were received on the project and we will be within the budget that was allowed.
We would like to start moving along with building the gun ranges at the Training Center, which will be paid out of the Federal Inmate Account, without having to deal with the long and unnecessary delays that we experienced with the storage building. This will enable us to save even more dollars on this project when completed. It will also allow us to move our firearms training out of our old facility on SR-200 sooner rather than later so the county can decide what to do with that property.

As agreed to unanimously, this proposed transfer of funds will be discussed at a future date.

While using GoToMeeting enables the County Commissioners to conduct regular meetings in a safe and effective manner, County Attorney/County Manager Mike Mullin stated before the close of the meeting, that there is really no effective means to facilitate a large public hearing. Consequently, hearings relating to amendments to Future Land Use Maps like 3.21 acres between Julia and Lewis Streets to provide for 28 multi-family units has been continued until May 21.

Commissioner Justin Taylor also introduced and had approved a resolution honoring Jake Berglund, a freshman at Yulee High School who passed just minutes after Easter Sunday. Commissioner Taylor talked of a huge parade that passed by his house this past Friday and the phone calls he received from President Donald Trump and University of Florida grad and football star Tim Tebow.