Tallahassee FL (February 4, 2020) – Over 70 Environmental organizations, businesses, students, outdoor recreation organizations and advocates from across Florida gathered in Tallahassee to call for an end to plastic pollution. Rise Above Plastics Day is dedicated to raising awareness of plastic pollution, ending state interference in local efforts to reduce single use plastics, and the importance of healthy beaches and coasts.

The Surfrider Foundation, Sierra Club Florida, Florida Plastics-Free Initiative, Oceana, Plastic Pollution Coalition, Environment Florida, Florida Keys Environmental Coalition, Greenpeace, Student PIRG, and other ocean and recreation organizations hosted a day of exhibits and tabling in the State Capitol Rotunda. The group gathered on the front steps of the Historic Capitol for a press conference with the infamous Greenpeace Trash Monster– a massive 15 foot monster made of plastic trash. 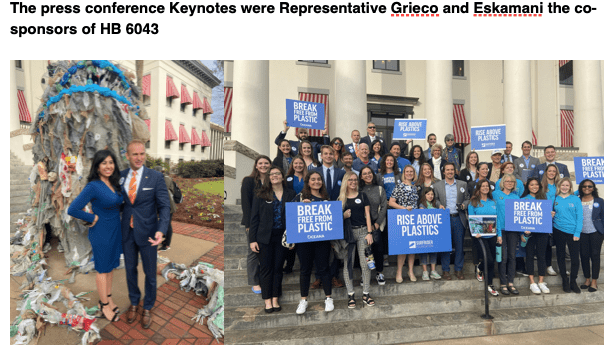 Over 50 legislators were met by these volunteers who advocated for bills that call for an end to plastic pollution, such as SB 182/ HB 6043, which would repeal the preemption of local laws regarding the use or sale of polystyrene. The group advocated for action this year, asking the legislature to put prudent regulations in place or simply allow local control of the issue for the welfare of Florida’s ecology and economy. Similar bills call for a review and update to the Department of Environment’s Retail Bags Report and adoption of those suggested regulations of auxiliary containers, or disposable plastic bags used by consumers.  If these regulations are not adopted the bill calls for the preemption to be lifted so local governments can act to protect marine resources on their own.

Tourism and the commercial and recreational fishing industry are such an important part of Florida’s economy, Rise Above Plastics Day calls for a state with approximately 1,350 miles of coastline to lead the nation in action on reducing and eventually eliminating single use plastics.  Instead Florida lags behind the nation in reducing waste.

Barry Wray, Florida Keys Environmental Coalition Director: “Our state and society needs to start the important step of embracing reuse over the convenience of a “throw away” society that has given us the plastic pollution conundrums we are all struggling with locally and globally.  We ask those elected to lead in this state, to join us going forward in helping to take important steps that make reuse and zero waste an achievable goal.  This is not accomplished by removing Home Rule rights, but by listening to the communities across our state, recognizing the problems they are aware of, in many cases due to the sensitivity of Florida’s vast marine ecosystems and working together towards solutions that address these realities.”

Kaitlyn Trent, Greenpeace Plastics Engagement Lead: “We urge the Legislature to undo these undemocratic preemption laws in Florida. Bans on plastic bags are preventing local communities from taking the action needed to address the plastics pollution crisis. Legislators should be answering to the people, not corporate lobbyists.”

Laura Reynolds, Plastics-Free Initiative Lead: “We have an opportunity during this legislative session to build unity in our plastic free efforts. Through a collaborative and interdisciplinary approach we can shift the community’s dependency from single use plastics for the health of our marine ecosystem and water quality.  What is missing is State leadership; we cannot afford another decade of inaction!”

Erin Handy, Oceana Field Campaign Manager: “One of Florida’s most valuable assets is the ocean that surrounds it, which drives the state’s seafood and tourism industry. Coastal communities are directly affected when plastic pollution contaminates their coastlines. These cities and towns are also bearing the costs of managing plastic waste, so they should have the authority to regulate it. Florida needs a law that prohibits plastic preemption laws and clearly places the authority to ban plastic of any form with local governments”.

Deborah Foote, Sierra Club Florida Government Affairs and Political Director: “The effort to reduce single use plastics requires a multi-pronged approach. Local governments must be free of state interference to do what is best for their community. The State also must be a leader, especially given that we cannot recycle our way out of this problem. And finally, corporations and businesses need to be good citizens and take steps to reduce their use of single use plastics. The health of our environment and our citizenry depends on it.”

Holly Parker, Surfrider Foundation Florida Policy Manager: “Plastic pollution damages our environment, our economy, and our quality of life. For a decade the Florida Legislature has stopped local governments from regulating single-use plastic bags, without ever seriously considering state-wide regulation. Florida has more coastline than any other state in the contiguous U.S. When it comes to clean water and healthy beaches, we must let our local communities lead.”