About 60 people gathered in the Peck Center auditorium the evening of January 23, 2020 for a program that laid out a proposed route for the final leg of the Amelia Island Trail. That portion would connect the existing southern portion of the trail to the Amelia River waterfront. Three city commissioners — Vice Mayor Len Kreger, Phil Chapman and Chip Ross — were in attendance as well as several members of city staff.

The purpose of the meeting, mandated by the Fernandina Beach City Commission, was to gather public input on the proposed route, which would would provide safer bike and pedestrian travel between the High School and Middle School on Citrona Drive, city parks, the Peck Center and the downtown waterfront.

Copies of the proposed route were on display and available as handouts.

Mike Spino, spokesman for Friends of Amelia Island Trail and the North Florida Bicycle Club, emceed the meeting and provided a brief overview of the trails project and its history over the past 17 years. Spino stressed that the plans were not final, and would require a long lead time prior to construction, that would probably occur in the 2020-26 time frame. Plans to extend the existing trail to the waterfront only affected publicly owned property. Design work to date has concentrated on developing a safe and convenient route to connect important parts of the community and meet needs of school children, commuters, bikers and walkers.

Sally Coyle, president of the Landscape architecture firm Coyle and Caron, Inc. walked the audience through the route. She was assisted by Alex Green, another member of the firm. She explained that the trail would be ten feet wide and paved with a five foot buffer for safety purposes. Coyle explained that one of the designers’ goals was to avoid existing power poles and disturb the areas traversed as little as possible. Stormwater improvements and streetscaping along South 3rd Street were planned.

The project, which would run from Hickory and Citrona to the waterfront would be built in two phases with grant money.

Coyle, whose firm is based in Orlando, noted that during her study of the route options she had concluded that Fernandina Beach is a special place. “We are sensitive to that,” she said. She prioritized ten challenges to completing the trail through town:
Right-Of-Way conflicts
Need to relocate 8-15 utility poles
Cost benefit analysis
Current Right-Of-Way uses
Obtaining neighborhood buy-in
Easements
Stormwater
Existing landscaping
Safety
Construction phasing

Spino reported that his group had knocked on 141 doors along the proposed route, distributed 198 flyers and spoken with the Nassau County School District, the Housing Authority, ten churches, the Amelia Island Museum of History and the American Legion. They have made over 100 contacts in designing the trail. 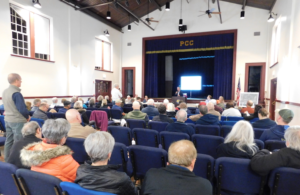 Fifteen audience members provided input following the presentations. Many were supportive, but others expressed concerns about the proposed route. The largest number of concerns related to safety, especially around the schools, South 3rd Street and crossing South 8th Street. Alex Green added that landscape architects have discovered that appropriate landscaping techniques — such as planting canopied trees — can have a calming effect on traffic speeds.

Some residents questioned why Beech Street was not a better alternative than Hickory Street.
Spino said that while Beech Street had been considered, the study group believed that Hickory was a better way to connect residents and avoid many existing structures in the Beech Street Right-Of-Way.

In closing the meeting, Spino emphasized that plans were at an early stage and that further input and study would be done before finalizing the route, which could take 5-10 years to become a reality.

In an email that followed the meeting, Spino reported that based on neighbors’ concerns they have asked the city to do a traffic count on S. 3rd St. He said that the truck traffic along that street is not destined for the mills or the Port, but consists primarily of food, beverage, construction and service vehicles.

He added that the North Florida Bicycle Club uses S. 3rd and Gum as part of their regular rides. “We have about 20 – 30 folks on our rides and every Thursday and Saturday when we ride this route,” Spino said. “We also use it every other Monday. That’s roughly 16,000 to 23,000 rider trips over the last 6 years without incident. And think about how much safer that would be if we are on an off road path.”

In the meantime our beach walkovers remain ignored