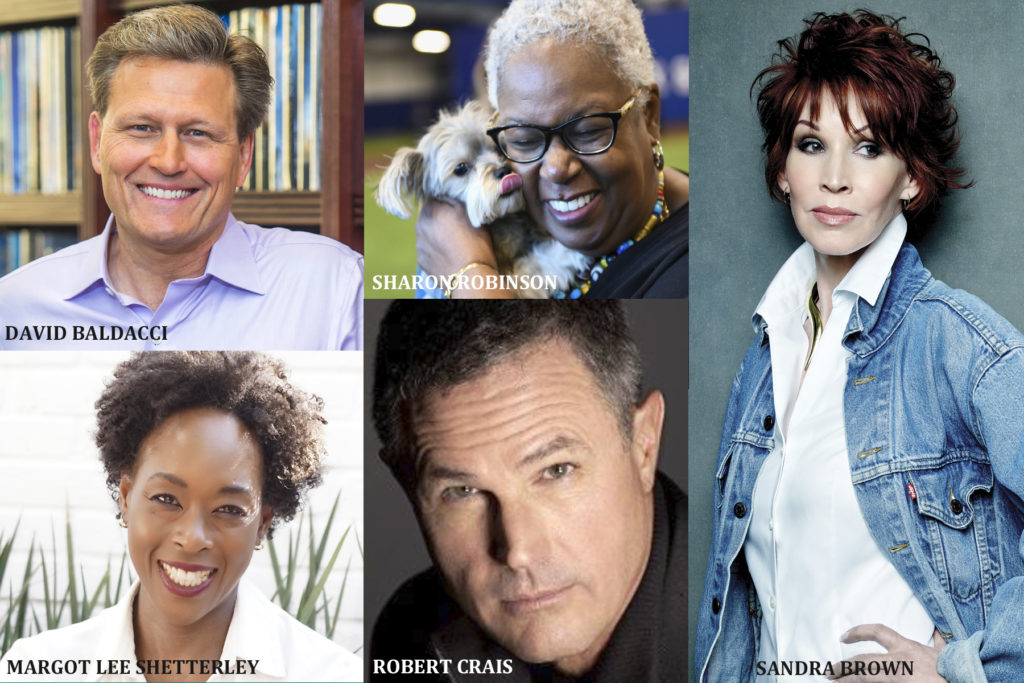 The 19th annual Amelia Island Book Festival is just three and a half months away, and details on this iconic annual event are flowing in as sure as the ocean tide rises. Tickets to the public go on sale Friday, November 1, for the festival’s biggest fund-raising event— the Amelia Island Book Festival Gala. On Valentine’s night in February 2020, ticket holders are going to love being entertained by five celebrity headline authors.

This elegant event attracts attendees from far and wide, not only because of its star power, but also because of the buying power each ticket helps to build. Tickets sales for the Gala start at $185, which covers the cost of the meal and supports the festival’s award-winning Authors in Schools Literacy Program, which buys books for every student in Nassau County schools. In 2020, that means purchasing more than 13,000 books.

On that Valentine’s Day, the Authors in Schools Program will bring more than 20 celebrity and noted authors to visit classrooms all over Nassau County to speak directly with students to engage and inspire them with books and writing. At the same time, each student receives a copy of the book by the author they meet. Ticket sales help support this effort.

The Gala Dinner at the Omni Amelia Island Resort offers a similar opportunity to adults who attend, starting with a cocktail reception where they can mingle and chat with the authors. Then, all will migrate into the dining room to enjoy a gourmet meal. After dinner and a decadent dessert, the authors create a panel to answer probing questions about their lives and their work, and what inspires them.

After that comes the exciting live auction, conducted by Florida State Sen. Aaron Bean. This year you or a loved one will have an opportunity to ‘live forever’ as a fictional character in one of Sandra Brown’s upcoming novels. Or, bid on the “Best of Broadway” package to host a concert in your own home with professional singers and piano accompaniment. Another auction item features a two-night stay at the Omni Amelia Island Resort in a premier oceanfront guestroom with breakfast for two daily in the Sunrise Café. These and many more valuable auction items raise much-needed funds for the Authors in Schools program.

It promises to be an unforgettable night, and anything can happen, because each Gala evening is one of a kind. As Sandra Brown says of some of her characters, “You never really know when they’re going to explode.”

More about the Gala authors:

David Baldacci, author of 38 best-selling novels, introduces a new character with his latest book, One Good Deed. Aloysius Archer is a straight-talking former World War II soldier fresh out of prison for a crime he didn’t commit. When a murder takes place right under Archer’s nose, police suspect the ex-convict, and he must use every skill in his arsenal to track down the real killer.

Sandra Brown has published over 75 novels and has more than 80 million books in print worldwide. Her latest, Outfox, is about FBI agent Drex Easton who is trying to outmaneuver a slippery conman. The Associated Press says Brown “not only nails a story that has several surprises, but also maintains the quality that everyone expects in her novels.”

Sharon Robinson is the daughter of baseball legend and civil rights icon Jackie Robinson. After writing three widely praised books about her father, Robinson tells her own story in Child of the Dream, a memoir of 1963. The Washington Post says, “She writes candidly about the challenges of being a teenager during that tumultuous time, and of the particular struggles of doing so as a black student in a mostly white school in Connecticut.”

Margot Lee Shetterley, a scholar-in-residence at the University of Virginia, is the author of Hidden Figures: The American Dream and the Untold Story of the Black Women Mathematicians Who Helped Win the Space Race, which was a top book of 2016 for both TIME and Publisher’s Weekly, a USA Today best-seller, and a #1 New York Times best-seller. It also became a popular movie, released in 2017 by Fox 2000 Pictures.

The Amelia Island Book Festival is a 501 (c) 3 nonprofit organization supported by the community through membership and donations.