Following an hour of public comment at a Special Meeting on September 24, 2019, the Fernandina Beach City Commission (FBCC) unanimously approved the proposed FY2019-2020 milage rate and Budget.  Details of this budget are available on the City’s website and were summarized in a previous article in this newsblog.  There were no changes following the first public hearing. 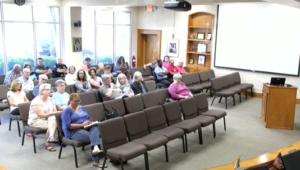 Eleven speakers expressed their support or opposition for the proposed budget before Commissioners voted to adopt the measures.  Four speakers were in strong support of the additional .5 mill increase to purchase land for conservation.  One speaker praised the City Commissioners for having the courage to raise taxes in order to accomplish the will of the community as evidenced in recent surveys as well as public meetings.  Another speaker said that he could never have imagined speaking up publicly in favor of a tax increase, but that he supported the City’s efforts to promote conservation of undeveloped land.

Opponents of the so-called “conservation tax,” expressed their support for a citizen referendum on such a tax as opposed to a legislative mandate from five commissioners.

Others, however, expressed concerns for new home purchasers and those on fixed incomes.  One speaker, Jack Knocke, called for an independent third party to review the Budget for potential savings.  He expressed concerns about proposed increases in property taxes being passed along to renters, who already have challenges in finding affordable housing.

Some of the speakers expressed uneasiness over decisions that the City would make to purchase various parcels of land for conservation purposes, claiming that the process needed to be more open and transparent to taxpayers.

City Manager Dale Martin reminded speakers that the proposed millage is the same as that levied last year.  The half mill increase was in response to the community’s opposition to continuing development of vacant lands that results in replacing trees and wildlife habitats with hard structures.  This tax will only be imposed for the FY2019-2020 Budget.  In November 2020 voters will be asked if they want to support a General Obligation Bond to continue collecting revenue for public acquisition of lands for conservation.

Opponents countered, claiming that the tax should be set at the roll back rate, since the valuation of taxable properties within the city has risen over the past year, resulting in increased revenue from taxes.

Vice Mayor Len Kreger reminded audience members that the decision to levy the half-mill increase for conservation was a unanimous decision of the FBCC.  One of the reasons for that, he explained, was that the North Florida Land Trust announced that it would launch a $4M fundraising campaign to match funds raised by the City to purchase conservation land.  “I think this is an opportunity to get some money to help us buy land as we go on,” he said.

Commissioner Phil Chapman sounded a cautionary note regarding capital needs of the city for the future.  Taxes will be needed to pay for overdue building maintenance and renovations and possibly replacement.  While replacing the Atlantic Avenue Recreation Center and City Hall are not comprehended in the new Budget, they will need to be considered for future years.  Kreger agreed.

Commissioner Chip Ross, in response to a speaker who said commissioners had not responded to his emailed concerns, took issue.  Ross said that he has only received ten emails on the millage increase and that he has personally responded to each one.  He compared the budget issues to Amelia Bluff, for which he received 150 emails, and the airport, for which he received over 300 emails or calls.  He indicated that in virtually all cases he responds via email, telephone or even in a meeting with the citizen. 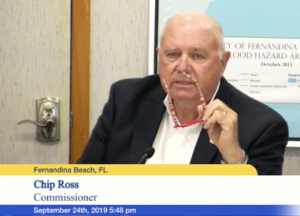 Ross referenced his own tax bill, for a small, renovated house in the Historic District.  He said that his bill for City taxes was roughly $1,900, or $5.30 per day to live in the City.  Ross said, “Half of that goes to police, which I think are superb.  We get fire and rescue protection, which I think is superb. We get roads that are good. We get all kinds of recreation facilities. We get beach access.  So for $5.30 per day — and I think I’m paying twice the median tax — I just find that a fantastic bargain.”

“But secondly, I’ve heard nobody complain about their County tax rate.  The City accounts for 2 percent of the Nassau County land mass and 14 percent of the County population.  We give the County $16M in taxes.  What do we get for that?  We get a jail, a few county roads within the City limits, and [services of] the Tax Collector, the Property Appraiser and the Elections Supervisor.  As part of next year’s budget, I’d like to go to the County and ask what we are getting for our $16M in taxes.”

Ross proposed asking the County to pay for beach improvements like new walkovers that benefit all county residents but which happen to be located within the City.  “People in this room, voters and taxpayers, are paying for all of that,” Ross said.

In addressing the question of why he does not support the roll back rate, Ross said that whenever the roll back rate is adopted, the first things to be cut are capital projects and maintenance.  He referenced a list he had compiled reflecting all the things that needed repair or maintenance today.  The list totaled between $35M-$45M.

With respect to the additional half-mill for conservation, Ross cited public concerns about development and its impact on the community.  He noted that because Florida has very strong property rights laws, the only way to prevent development is for the public to buy the land and place it in conservation.  He indicated that the city and the North Florida Land Trust will be working from lists of available lands, including those that border the Greenway.

He said that because of the pace of development, he supported moving ahead with land purchases in advance of a referendum.  He also views the $1.2M that will be raised via the half-mill this year as a test case.  “If we can’t manage a $1.2M conservation fund, there is no point in going out to a referendum,” he said.  He added that buying what some consider to be swampy, undevelopable land helps lower flood insurance rates for everyone in the City.

“There is a process in place via the North Florida Land Trust for purchasing these lands,” Ross said, “so it is all above board and completely transparent.”

“The reason I ran for City Commission was to improve the quality of life here,” Ross said.  “All these things that I get for that $5.35 per day is why we live here.  They’re expensive, and I don’t know how to get around that.  If we could do them for less money, we would.  The staff works hard, and they have looked hard to find any little piece that can be cut [from the Budget].  Could they cut more?  Yes.  But what goes away is capital projects and maintenance, and that’s where the problems lay.”

With that, Ross moved to approve the proposed millage rate, and Kreger seconded the motion.

All commissioners supported the motion.  When there was no additional public comment on the proposed Budget, Ross moved to adopt the Budget and Kreger seconded his motion.  That motion also passed unanimously, with no further discussion from Commissioners.