Mornings are not pretty on Division Street. 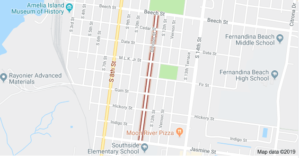 Four residents of Division Street between Hickory and Jasmine Streets took full advantage of their opportunity to offer public comment to the Fernandina Beach City Commission (FBCC) during the September 17, 2019 FBCC Regular Meeting to express their frustration over what one commissioner termed “parking chaos” on their street.  To this point, speakers claimed, neither the City nor the Nassau County School District has claimed ownership of the problem.  The residents pleaded for help in resolving what has turned into an often nasty battle between residents and parents dropping off their children at Southside Elementary School.

This problem has arisen in other parts of the City near schools and in similar situations throughout the country, where schools were designed as neighborhood schools that children could access by foot.  Despite the availability of transport via school buses today, many parents opt to drive their children to and from school, creating neighborhood traffic and parking problems.

There are no sidewalks on Division Street.  Cars and children walking to school compete for the same path.  Residents unanimously expressed safety concerns for the children.  They also expressed fears that verbal exchanges between residents and parents could escalate into physical violence.

Division Street residents claim that both parents and substitute teachers routinely block access to their properties, sometimes even parking on their lawns and in their driveways.  One resident indicated that when she asked one of the parents to leave her driveway to allow her to go to work, the reply was “I won’t be long.”  Another resident was told that substitute teachers are encouraged to park on Division Street.

Residents claim that often heated verbal exchanges have led them to fear asking drivers to move their cars.  Residents tried placing barriers to prevent this activity, but were then cited by City Code Enforcement for violating City right-of-way infringement and threatened with fines if they did not remove the barriers.  A resident asked why they were singled out when residents of other areas of the city — notably South Fletcher Avenue — are allowed to place impediments to parking in the right-of-way adjoining their private properties.

Efforts to work with City and School District officials have not been productive to date, leaving residents to appeal to the FBCC for relief.  Southside parents recently received a letter from the school in an attempt to increase awareness of the problem, but there has been no improvement, according to residents.

Commissioner Chip Ross, who visited the street the morning of the previous day, concurred with the speakers that the situation is chaos.  Drivers do not parallel park along the street, choosing instead to park diagonally, encroaching on both the city right-of-way and private property.

Commissioner Mike Lednovich was sympathetic to the issue of unequal code enforcement for right-of-way infringements.  He asked City Manager Dale Martin to insure that the Division Street property owners are not held to a different standard than other property owners.

The FBCC charged the City Manager with addressing the issues raised.  He will meet with Police, Code Enforcement, and Streets Department in addition to School District personnel and report back to the FBCC at their October 1, 2019 meeting.

A School District representative was in the audience but did not speak on the issue.  When reached for comment following the meeting, Nassau County School Superintendent Dr. Kathy Burns acknowledged that she was aware of the problem.  “We have been communicating with Chief Hurley and others on this matter,” she wrote, adding that Division Street is outside School Board-owned property.  She said that there are parking spaces in the back parking lot of Southside Elementary School.  She also suggested that the City put up No Parking signs, as they have on Jasmine Street.