Draft 2019 Citizen Survey results are in 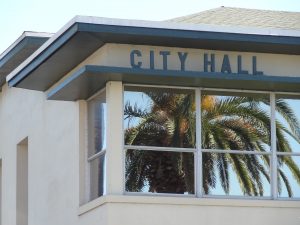 City Manager Dale Martin has released the draft of the 2019 National Community Survey for the city of Fernandina Beach.  Entitled “The Community Livability Report,” this survey represents the opinions of a random sample consisting of 1,055 city residents.  The margin of error around any reported percentage is 3 percent for all respondents.

In releasing the draft report Martin wrote, “The survey results will be utilized by City Commissioners and staff to assist with policy-making decisions. The intent is to conduct the National Citizen Survey on a two- or four-year cycle to monitor trends and develop policy direction.”

This survey is the second of its kind conducted in Fernandina Beach.  The first conducted in 2017 randomly sampled 500 residents with a 4 percent margin of error.  The 2019 survey doubled citizen participation.  The National Community Survey is presented by National Research Center, Inc. (NRC) in collaboration with the International City and County Managers Association (ICMA).  It should be noted that the city had no say or knowledge of who would be surveyed.  Only residents within the geographic boundaries of the city of Fernandina Beach were eligible to be surveyed; no one could “volunteer” to be surveyed.

Almost all respondents rated the quality of life in Fernandina Beach as excellent (44%) or good (47%).  As in the previous survey, residents identified safety and natural environment as community priorities for the next two years.

The report goes on to summarize:

“Survey respondents rated over 40 features of the community. Safety ratings were strong with at least 9 in 10 residents offering positive evaluations to each characteristic listed with overall feeling of safety rated higher than the national norm and higher than ratings given in 2017. Three of the four characteristics that were rated lower than the national averages were housed within Built Environment and were also rated lower in 2019 compared to 2017 (quality of new development, affordable quality housing and housing options). While the overall natural environment received lower ratings in 2019 compared to 2017, this item along with the other Natural Environment characteristics listed tended to be similar to the benchmarks and were rated positively by at least 7 in 10 residents. Recreation and Wellness generally garnered positive ratings from at least about 7 in 10 residents; all of which were ratings similar to the national comparisons. Ratings of Economy varied with as few as one-third offering positive evaluations to cost of living and employment opportunities but nearly all residents offering positive evaluations to the community a s a place to visit.”

About 70 percent of survey respondents rated the overall quality of city provided services as good or excellent.  While three-quarters of residents gave thumbs up to the overall quality of service provided by city employees, only 40 percent of respondents appeared to be positive about city leadership and governance.  This marked a decline from the 2017 survey as well as in comparison with the national average.

These responses seemed to correlate to current community concerns over development, land use, and preservation of the natural environment.

93 percent of respondents indicated that they voted in local elections; 88 percent said they read or watched local news.

The bulk of the survey consists of questions administered to all communities.  However, the city of Fernandina Beach asked that three specific questions related to this city be included.  The responses are shown in the pie charts to the right of each question below: 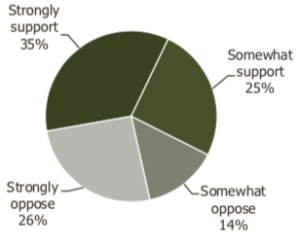 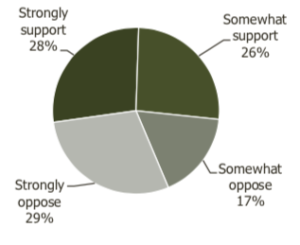 Question 2: The City of Fernandina Beach is considering increasing taxes by one-half mill in order to generate approximately $1,000,000 for land conservation. How much would you support or oppose this proposed dedicated annual tax?

Question 3:  For routine downtown visits by car, how easy or difficult is it for you to find an available parking space? 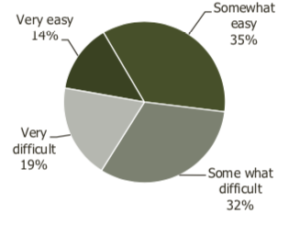 The political kings are ramping up for the 2020 election season. Clearly the impact of growth rises to the top of public policy concerns. The greater need is to focus on how the City is prepared to meet the needs of an aging population. How well we care for our seniors will become a major economic driver in the years ahead and what sort of medical services we attract. Lets hope the City opens this conversation before the Dementia tsunami shows up on our shores.

This was a total waste of money. It was not “random” and the questions were poorly worded. Add to that, it has been known since at least March that city residents may NOT be exempt from paying for parking at the beach if it is implemented because that violates the city’s agreement with the Army Corp of Engineers regarding beach renourishment.

The only way to get an accurate assessment of where the citizens stand on this issue is to go door-to-door and use a survey company that actually knows how to word a question. Better yet, just put it on the ballot but BE HONEST. Even if a “rebate” is given to city residents (questionable is that will be legal), in the long run we will still be paying twice for the beach access points. The ones the TDC funds are SUPPOSED to be paying for.