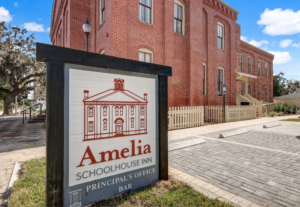 Getting sent to The Principal’s Office isn’t what it used to be in Old Schoolhouse No. 1 in Fernandina Beach, FL.  After a major historic preservation and rehabilitation project that has received both local and state recognition, the ugly duckling of a building has been transformed into a swan: the first-class Amelia Schoolhouse Inn.   And, oh yes, The Principal’s Office has become an upscale bar, visited by inn patrons and locals alike.

Those who remember how the old building looked just a few years ago must look upon the renovated structure with wonder.  To say that the old schoolhouse had fallen into disrepair is an understatement.  The outside was characterized by failing brick walls; the interior was dark, dank and gloomy.

Spence Romine, along with his business partner Sam Van Voorhis, tackled the transformation of the long neglected schoolhouse.  This is the sixth hotel that Romine has transformed, but the first historic preservation project.  He has concentrated on small hotels, from Anna Maria Island to Lake Tahoe and Sedona.  One of his properties at Lake Tahoe — the Deerfield Lodge — was rated number one in the nation for customer service.  His service manager at that facility — Amanda Mitchell — has come on board to manage the Amelia Schoolhouse Inn.

A native of south Georgia, Romine has lived in south Jacksonville with his wife and children for the past three and a half years.  After selling his Anna Maria Island hotels, he was looking for a new project and came across the old schoolhouse on Atlantic Avenue in Fernandina Beach.  The building was no longer used as a school and was privately owned.  The inside had been carved up into a number of small offices, one of which held architect Jose Miranda, who was to become Romine’s architect on the project.

The schoolhouse building was constructed in 1886 by the Nassau County Public School District and designed by noted architect Robert Sands Schuyler.  Other Schuyler properties surviving in Fernandina Beach today include St. Peter’s Episcopal Church, the Fairbanks House, the Hirth House, and the Tabby House.  As the town grew, a rear wing was added around 1909 to the original 4-room structure.  When the school population outgrew the facility, the building served other community functions, including a Masonic Lodge, the Women’s Club, and the public library.  By 2016 it had passed into private hands and had become a rabbit warren of small offices.

According to architect Jose Miranda, who conducted a feasibility study in 2017 to determine if the structure could be converted into a boutique hotel, the pre-project condition of the old schoolhouse was fair-to-poor due to water damage and mortar deterioration over the years.  All the building’s windows needed to be removed, restored and reinstalled.  The wood framing revealed rot and evidence of some past fires.

But according to new owner Spence Romine, the biggest surprise came when the contemporary interior wall finishes were removed. The schoolhouse had long been thought to be a brick structure, but it was discovered that the structure was actually wood covered with brick veneer.  And sunlight could be seen streaming through the failed brick mortar joints.  Instead of just doing some patching, Romine and his partner decided to replace deteriorated bricks as necessary and repoint the entire building, using correct mortar in the right color.  That was an unanticipated expense, but the finished product is a testament to their determination to “get it right.”

People who made it happen

Guiding the workers through the process was architect Jose Miranda.  Miranda and his wife Lori have developed a fine reputation for their architectural design.  Originally from Tampa, FL, Miranda has been steeped in historic preservation.  In addition to his academic training, he has served multiple terms on the city’s Historic District Council; he has also served on the Florida Department of State’s  Historical Commission.  Today he serves as a board member for two prominent local organizations dealing with historic preservation and the National Register Historic District:  the Amelia Island Fernandina Restoration Foundation, Inc. and Fernandina Beach Main Street, Inc.

In May the Amelia Schoolhouse Inn historic preservation project was honored with both state and local awards.  The Florida Trust for Historic Preservation recognized the excellence of the project by bestowing it with its annual award for Best Adaptive Reuse of a Historic Building.  This is the first Florida Trust award given to a project in Fernandina Beach.  The City of Fernandina Beach also awarded its most prestigious award — the Keystone Award — to this project.

The honors recognized the efforts of the property owners, the architect and the construction team.

The property debuted to the curious public, who had been watching progress on the restoration from afar, during the May 11, 2019 Tour of Preservation Homes, hosted by Fernandina Beach Main Street.  Tour participants marveled at the changes, including the building’s entrance way with its lavish display of re-planed, original heart pine throughout, the imaginative bar (“The Principal’s Office”), beautifully outfitted rooms with their schoolhouse decor, and the rebirth of the brick exterior.

Architect Jose Miranda was on-hand during the tour to answer questions about the building’s history and the extensive preservation work that preceded the inn’s debut.

The inn features seventeen guest rooms, all equipped with modern bathrooms and containing small refrigerators.  The decorating theme throughout the inn reflects the building’s history as a schoolhouse.  The original building, which only contained 4 rooms, features hardwood floors; the back addition that was constructed 30 years later, features carpeted floors because not enough of the original heart pine could be salvaged to cover the entire building.

Manager Amanda Mitchell lives next door to the inn in an additional property purchased to provide for additional parking and laundry facilities, assuring her availability at all times to respond to guest questions and needs.

Although the inn has only been open since December 2018, TripAdvisor is full of rave reviews for the property and its staff.  Many of the inn’s guests are teachers or former teachers.

Romine said that he has been surprised at how busy the inn has been during its first months of operation.  He talked about how pleasant it has been to work in this community and offered lavish praise for Gil Langley, President and CEO of the Amelia Island Convention and Visitors Bureau.  He said that Langley’s extensive data on island accommodation, occupancy rates, etc., were essential to his decision to tackle the schoolhouse project.

The Old Schoolhouse now stands as a beautiful reminder of Fernandina’ past, giving new life to one of the city’s landmark properties and anchoring the eastern edge of its Downtown, National Register Historic District. 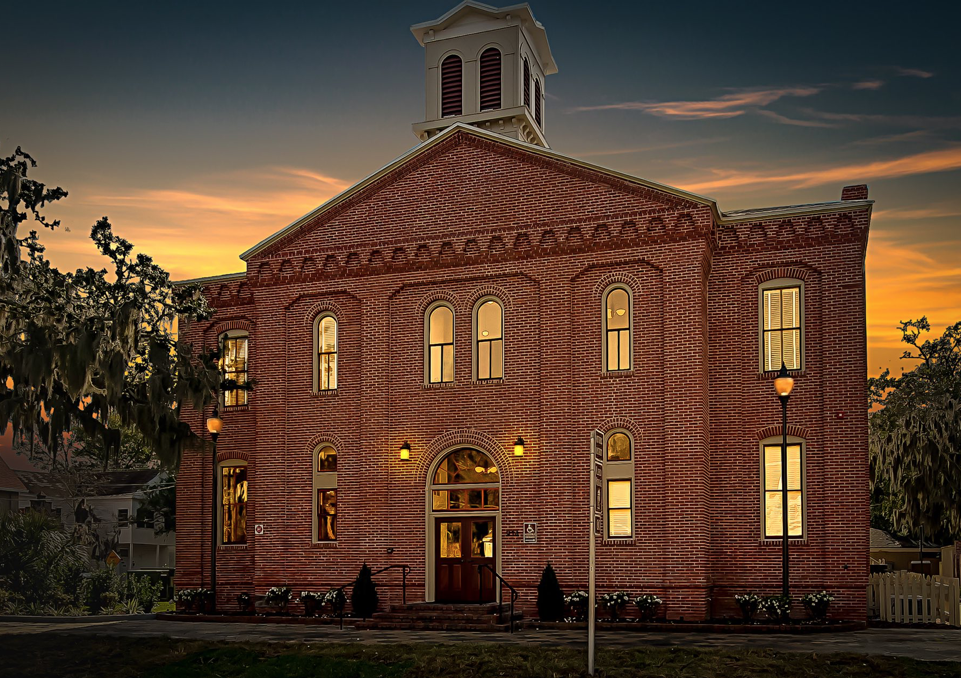 Congratulations on your historic preservation awards and thank you for preserving this wonderful building.