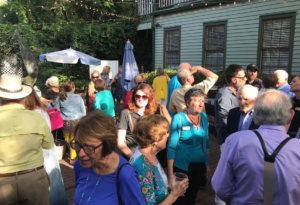 Fernandina Beach is known for more than just its fine beaches, the story of its eight flags and for being the birthplace of the modern shrimping industry.  An important part of its identity is the preservation and celebration of its Downtown and Old Town Historic Districts, which are listed on the National Register of Historic Places.  Every two years the city and preservation related organizations join together to celebrate continuing efforts to preserve the city’s architectural heritage.

About a hundred awardees and invited guests attended the 2019 Preservation Awards ceremony in the courtyard of the Florida House Inn May 9, 2019.  Enjoying refreshments and fine weather, past and current award recipients socialized with event partners and sponsors, judges and city staff under bright skies.

The Florida House Inn, which hosted the event, is a past recipient of a city Historic Preservation Award.

Craftmanship:  In recognition of traditional construction methods, included but not limited to wood working, wrought-iron work, framing, or plastering, and recognition of the craftperson that completed the work. 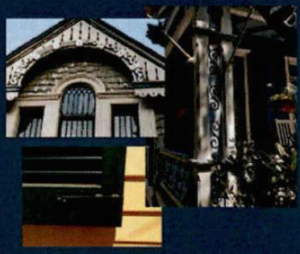 Rob Psulkowski, Built to Last Construction, received the 2019 Craftmanship Award for his painstaking attention to detail on two rehabilitation projects:  the Phelan-Verot House at 116 N. 4th Street and the Lasserre House at 130 S. 7th Street.

New Construction:  Awarded for sensitive design and careful construction of a new structure in either the Old Town or Downtown Historic Districts.

Jag and Chris Gholson received this award for their new home at 1102 Ladies Street in Old Town. 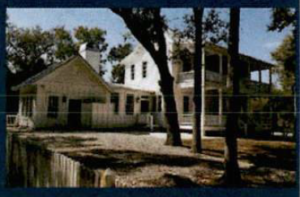 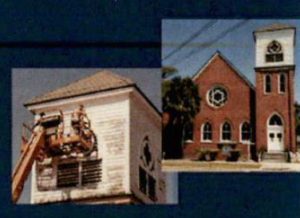 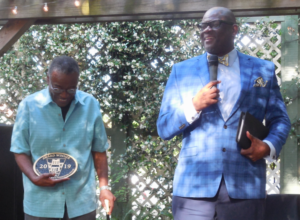 A new category, this award was given to Trinity United Methodist Church at 715 Ash Street.  This historic African American Church was recognized for embodying the spirit of preservation through the ongoing care and maintenance of its historic structure, specifically the rehabilitation work on the bell tower.

In accepting the award, Pastor Granardo L. Felix thanked all the members of his congregation and community volunteers who had rallied to help the church succeed in this endeavor.

He noted earlier efforts by community members that had helped the church obtain a state grant to restore its windows.

Pastor Felix recognized long time members of his congregation as well as community volunteers who have assisted the church in restoring and maintaining the historic structure.

Storefront Facade Renovation:  In recognition of a project that demonstrated sensitive treatment of a historic storefront 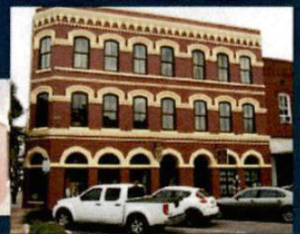 Miranda Architects received the first of two awards for their work to replace windows on the historic Chandlery Building at 201 Centre Street.  While it might not be apparent to the casual passer-by, each window in the building is a different size, providing a challenge to renovators.

Summer House Realty  owners James and Jenny Schaffer took an unremarkable cement block warehouse just outside the downtown Historic District boundary line at 316 Ash Street and converted it to an accessible multi-story office building with a unique design.  This project was featured during the Historic Home Tour on May 11.

Local attorney and lobbyist Arthur I. “Buddy” Jacobs was honored for his preeminent role in preserving Fernandina Beach’s architectural heritage.  Jacobs was a prime mover in the formation in 1972 of the Amelia Island Fernandina Restoration Foundation, Inc. He was named its pro bono executive director, and with a team of dedicated local citizens began the politicking, fund raising and grant writing that ultimately resulted in the restoration of six blocks  of downtown Fernandina Beach in 1978.

In accepting the award, Jacobs was quick to give credit to the early leaders of the Restoration Foundation who invested their time and energies to promoting historic preservation and making sure that the city’s remaining treasured buildings would not fall to the wrecking ball as did the Keystone Hotel in 1970.

His work in historic preservation has not been limited to Fernandina Beach.

He has served since 1977 as a member of the Board of Advisors of the Preservation Institute of Nantucket and served as Chairman of the Board for over a decade.  He has lectured throughout the country on Historic Preservation on how to restore towns and cities, using the Fernandina Beach experience as an example.  He served for 6 years as a Regent on the Board of the American Architecture Foundation in Washington, DC.

Early on in his career, while employed by the University of Florida, he undertook the restoration and opening to the public of the long-neglected Marjorie Kinnan Rawlings home and citrus grove at Cross Creek. The site was later named a National Historic Landmark.

Jacobs has successfully represented counties, cities and community associations seeking federal and state funding for a variety of projects including preservation of historic landmarks.

Over the years Jacobs has been recognized for his work in historic preservation.  In 2010, he received the University of Florida College of Design, Construction and Planning Beinecke-Reeves Distinguished Achievement Award.  The annual award, given by the college’s Historic Preservation Program, recognizes an individual with a connection to the state of Florida who exemplifies the spirit of historic preservation and has demonstrated exceptional dedication to the field.

Even today he continues working on historic preservation.  His most recent, visible efforts focus  on convincing the USPS to invest in maintaining the Historic Post Office Building on Centre Street. 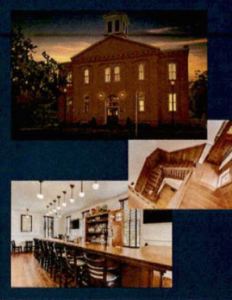 In architectural terms, a keystone is a central stone at the summit of an arch. locking the whole together. The term has a special meaning for Fernandina Beach, because the origins of the historic preservation movement can be traced back to the demolition of the Keystone Hotel, which once graced the corner of Centre and 8th Street on the spot occupied today by Pineland Bank.  Representation of a keystone has been incorporated into the preservation award plaques, and the highest award that can be bestowed upon a preservation project has been named the Keystone Award.

Architect Jose Miranda accepted this award for this year’s project that best represents historic preservation:   the Amelia Schoolhouse Inn at 914 Atlantic Avenue.  Miranda told the audience some of the challenges that his team faced in converting the old schoolhouse to a boutique hotel.  He said that when workers removed interior walls they saw daylight streaming through the brickwork.  This project was featured during the Preservation Home Tour that took place on May 11.

This year’s panel of judges included:

I’d like to extend my thanks to each of you involved in the preservation of our beautiful Fernandina Beach, past and present. We have a golden jewel in our downtown historic district and I’m proud to live here. For a small city, we have so many beautiful works of arts to admire and show off to our visitors. Bless your hearts and keep up the good work!

Each recipient deserving of their award……I esp.congratulate Jose Miranda as I was a volunteer @ the Amelia Schoolhouse Inn & he answered questions re:the project w/ such passion. Congratulations to all involved!!