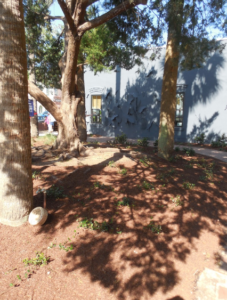 Fernandina Main Street, in conjunction with Fernandina Beach High School’s Key Club, a student-led organization that promotes leadership through serving others, has added a butterfly garden to the city’s downtown historic district. On May 10, 2019 Fernandina Beach Main Street Executive Director Arlene Filkoff emceed a brief ribbon cutting ceremony that officially opened the garden to the public.  Residents and visitors were on hand to see the results of more than a year of planning and design, cooperative efforts with the city and local business, and just plain hard work by many volunteers.

Located on the east side of the historic Train Depot Plaza, the garden features an array of plants selected to attract butterflies.  The garden, which also features a series of bicycle racks, is set against the backdrop of a 3-D butterfly mural commissioned by Lindy Kavanaugh for the west wall of her neighboring building.  The walkway consists of original 1900-era bricks salvaged from Centre Street during the 1970’s street redesign. 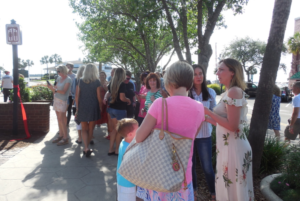 Before the formal ribbon cutting, Filkoff credited all those responsible for the butterfly garden’s installation, starting with the city of Fernandina Beach.  She noted that volunteers scrounged through the city’s maintenance yard to reclaim the bricks that had once formed the surface of Centre Street.  The city had stored these following their removal in the 1970’s as Centre Street changed into the serpentine street we see today.  The city donated these bricks to the project.

Marine Corps veteran Lynda Dahl, who as the owner of Imetry, Inc.  has more than 15 years of experience designing and installing exterior hardscapes for owners and builders, offered her company’s services to install the brick walkway at no cost to Main Street or the city. 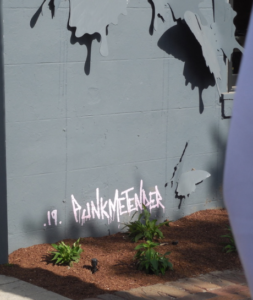 Lindy Kavanaugh, owner of Lindy’s Jewelry , a fine jewelry shop founded in 2001 in downtown Fernandina Beach, had been interested in making the west facing exterior wall of her building more attractive.  In keeping with the garden’s theme, she opted to incorporate the butterfly design into her plan.  The result is a unique, monochromatic design by artist Punk Me Tender from which the butterflies literally pop out at the viewer. This mysterious artist is known for his raw form of art.

What a wonderful result of volunteer collaboration and ingenuity! Thank you to everyone who contributed!!

There used to be a butterfly garden behind the old Atlantic Elementary (school board building). Nice to see it where more people will enjoy it.

What a wonderful addition to the Depot area and the downtown historic area. Kudos to all those companies and individuals that donated time, talent and treasures to this project.

What a wonderful addition to our beautiful downtown. Thank you to all who made it possible.