Garbage in, garbage (hopefully) out by end of week 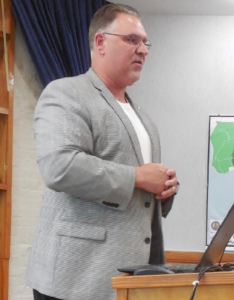 According to Advanced Disposal representatives, Fernandina Beach residential trash pick-up problems will be resolved by the end of this week.  Speaking to the Fernandina Beach City Commissioners (FBCC) at their May 7, 2019 Regular Meeting, company spokesman Greg Huntington acknowledged and addressed the problems that appear to have sprung up all over the city over recent months regarding irregular trash pick up schedules, long waits for pick up of yard debris and bulk items, and customer communications issues.

Huntington said that his company had underestimated the time it takes to deliver and dump yard debris at the landfill.  Previously haulers just dumped the material at a city run site at the airport.  That situation changed with the new contract.  That, along with the ongoing traffic issues on S.R. 200, slowed operations. 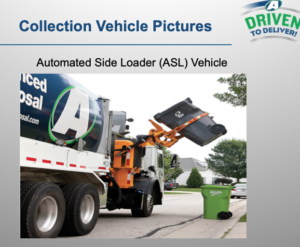 He said that the switch to new trash vehicles has also caused some initial loss of speed in operations as personnel learns to use the new side loading trucks.  Customers should note that normal trash/recycle pick ups are limited to what is contained in the trash bins.  Material left alongside will be picked up as part of the bulk pick up run.

Company representative Jeff Edwards explained that Advanced Disposal is adopting a new schedule for bulk item pick up that will cover the entire city in one day.  In addition to stressing how the company is educating their new haulers, Edwards and Huntington addressed the problems customers have experienced with their phones and social media.  The company has upgraded the phone system and added more service representatives to field calls.  Starting Tuesday, the wait time — which has averaged 30-35 minutes — has been reduced to 2 minutes and 14 seconds. 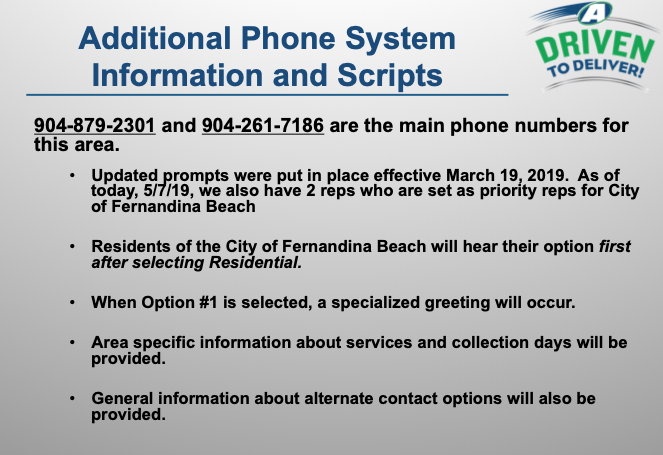 The company has also added a dedicated supervisor for Fernandina Beach.

Representatives took responsibility for the problems, issued an apology and said that pick-ups would be caught up by the end of the week.  Extensive efforts are underway to improve communication over problems and issues with haulers and customer service representatives.

Vice Mayor Len Kreger thanked them for the update but cautioned, “We need to see real improvement on the street.”

Are they also going to resolve billing issues (over charging) that have been going on for months and years? I know my neighbor and I have been TRYING to work with the city utility office for some time regarding being overcharged and, while plenty of promises have been made, and lies told, both of us are still out money. And, before anyone blames the new computer system, both of our issues predated the new system and that still does not excuse the multiple lies I have been told.