On April 16, 2019, Jim Frye, VP for Business Development at Westrec Marinas, provided Fernandina Beach City Commissioners with an overview of past, current and projected revenue at the city’s marina operations.  Westrec manages the Fernandina Harbor Marina under a contract with the city.

Frye began his talk with a national overview of the impact of recreational boating on the economy.  He also talked about the impact within Florida’s 4th Congressional District, which includes Fernandina Beach.

He said that one of the unique features of Fernandina Beach’s marina is its impact on the entire city.  Using an economic indicator model developed by the University of Florida, Frye said that the total projection of 2020 impact (direct and indirect) of the marina reflects:  20 jobs, $1.6M GDP, and a million dollars in wages.  He also presented a slide showing the amount of tax revenue the marina generates.

“It’s important for you to understand the value of the marina, not just to the people who use it, but to the entire city,” Frye said.

In addition to operating the city marina, Westrec aggressively markets its services and location.  This activity has been severely hampered the past two years because of Hurricane Matthew-related damages that have in effect closed the marina to most traffic.

In turning to the marina financials, Frye addressed the current debt that the marina carries.  He expressed his belief that should the ongoing repairs and rebuilding continue on schedule, the marina could become debt-free in ten years of full operation. 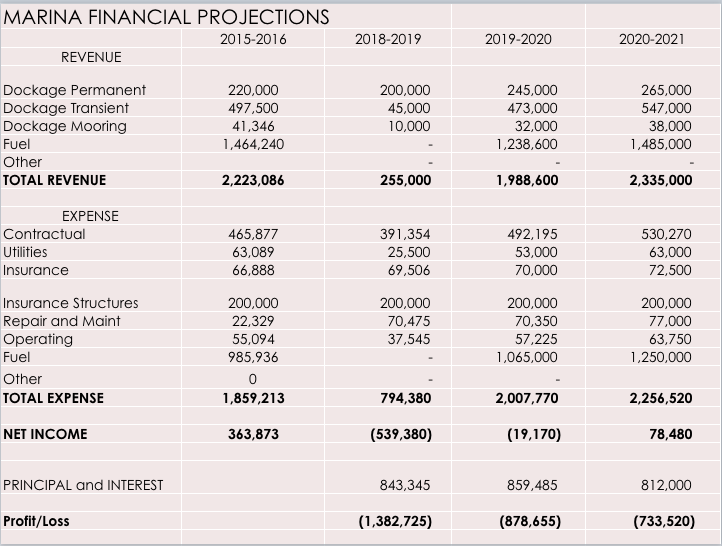 He expressed optimism that the marina will be even more vibrant once repairs have been completed.

Ross asked Frye whether he believed that upland development to include activities such as boat storage would be a good source for additional income.  Frye said that in every marina “the vast majority of income comes from rental of the slips themselves.”  The profit margins on other marina related businesses are nowhere near as significant.  He said that those businesses thrive when they are lifestyle businesses.  Westrec is not in any of those businesses.  He said that in the case of Fernandina Beach, there would be costs to set up such businesses, which would be dependent on available land along the waterfront.

Frye suggested that the available land at the Fernandina harbor might be best used for the public’s enjoyment as opposed to ancillary marina businesses.

Captain Kevin McCarthy reinforced Frye’s statement that the marina is good for local business.  He cited the value that comes from tourists and transient boaters who decide to stay, shop and eat locally.  He asked the commissioners to keep that in mind in discussing the marina’s financial picture.  “It’s more than just the marina,” he said.  “It’s the entire town.”