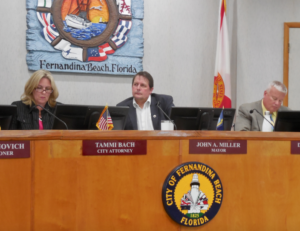 Fernandina Beach City Commissioners (FBCC) continued to discuss development of the Amelia River Waterfront, including issues related to shoreline stabilization and sea level rise, at their April 2, 2019 Regular Meeting.  When commissioners decided to combine two agenda items into one discussion item with two separate votes, things became a bit confusing for both commissioners and the public.

After all was said and done, the FBCC passed Resolution 2019-52, which accepted a proposal from Wood Environment and Infrastructure Solutions, Inc. in the amount of $35,700 for the preparation of the Fernandina Beach Downtown Resiliency Master Plan.  The vote was 3-2, with Mayor John Miller, Vice Mayor Len Kreger and Commissioner Phil Chapman voting in support; Commissioners Mike Lednovich and Chip Ross voted against the Resolution.

Commissioner Chip Ross led the opposing discussion, questioning why this item was following a separate track from the related agenda item that authorized the City Manager to continue discussions in response  to a previously Unsolicited Proposal for waterfront development that included issues such as shoreline stabilization, sea level rise and property development.  He did not see a need for a separate master plan.

City Stormwater Director Andre Desilet explained that the Master Plan was needed to bring together all the work that the city had already commissioned (and paid for), so that there would not be a need to reinvent the wheel in moving forward with waterfront development.  The work on this document will provide additional guidance and establish design criteria to evaluate waterfront projects, as well as develop tools to help prioritize capital improvement projects in other areas.

Desilet recommended Wood Environment and Infrastructure Solutions, Inc. to render the services as required for the preparation of the Downtown Waterfront Resiliency Master Plan pursuant to the funding agreement with Florida Department of Environmental Protection (FDEP) approved via Resolution 2018-154. Wood has experience preparing similar studies for other municipalities, including the City of St. Augustine.

The FBCC heard from two firms that have expressed interest in being brought on board to deal with Amelia River waterfront development issues extending from Rayonier Advanced Materials to the Port of Fernandina.

Acatects, LLC had submitted an unsolicited proposal as part of a response to a request for expressions of interest  in developing the former Vuturo property at 101 N. Front Street put out by Fernandina Beach Main Street last year.  Although commissioners were impressed with Acatects’ response, they ultimately decided to open up the broader proposal they had received in response to a wider audience.  As a result, Taylor Engineering expressed interest in working on the marine engineering aspects of the project, and Passero Associates expressed interest in being considered for the entire project.

During discussion, Taylor Engineering clarified that they would be part of the team assembled by Acatects.  Passero representative Andrew Holesko explained that Passero had previously been awarded work on the city waterfront under the BIGP grant awarded to the city previously.

The FBCC directed the City Manager to continue discussions with both Acatects and Passero and return with findings to the FBCC in May.

AWESOME!~~~~Another week another study and another $35,000 down the tubes. I hope someone is stacking all these studies somewhere. Perhaps free copies for all taxpayers who have previously paid for them as they could make interesting reading. Please do not tell us “they are free~~we have a grant from The State”. We are who pays the $$ into the state! We came here ten plus years ago and The Waterfront was “under study”. Nothing donew oher than to close it and remove use. The Marina 3 years later….still in pieces. The beach walkover sure got bulldozed fast! City Manager however says(his words) “we’ll have them open by May 24th for Memorial day”…..Stay tuned for the nextr chapter of “The City of Fernandina Beach commissions another study”. Thanks to the two commissioners who voted no.

Money isnot water Commissions, please stop spending it as it were asnd at least START to get something d.o.n.e.

When are we going to stop bringing in outsiders to tell us what we already know, then throw large sums of money at them, and put what they do tell us on a shelf somewhere and then bring in more outsiders… ad infinitum