Under bright skies with light breezes, elected officials, business and port representatives assembled on the lawn of the Port’s former Quartermaster House, 501 N. 3rd Street in Fernandina Beach in the early afternoon of March 29, 2019, to welcome U.S. Commerce Secretary Wilbur Ross, who was visiting to promote economic development, opportunity zones, and increasing exports of agricultural and other products through the Port.

Running slightly behind schedule, Secretary Ross addressed an audience of invited guests following a tour of the Port of Fernandina and its facilities during which he was accompanied by U.S. Representative John Rutherford, Ocean Highway and Port Authority Commissioners, Worldwide Terminals executives and Laura DiBella, Nassau County Economic Development Director/Port Manager.

In welcoming Secretary Ross and invited guests Worldwide Terminals Fernandina President and CEO Christopher Ragucci thanked Ross for his strong support of the nation’s ports.  He reported that since taking over operations of the Port of Fernandina from Kinder Morgan late last year, Worldwide Terminals has invested $12M to modernize port facilities and operations.  Over the next few years there are plans to invest an additional $15M in warehouses, cranes, other facilities as well as deepening the channel.  The Port of Fernandina is primarily an export operation, and with growth in cargo anticipated through M-95 barge operations and new business, Ragucci indicated that the port will add more workers to its payroll.  He emphasized that Worldwide Terminals is planning to be a long term operator embracing both innovation and cost effectiveness.

Laura DiBella also welcomed Ross, touting the surge in manufacturing, healthcare and tourism that the county has experienced over recent years.  She said, “It’s hard to believe Nassau County has been designated a rural county when it boasts a Ritz.”  She also emphasized the benefits that will accrue to the Port of Fernandina with approval of the M-95 designation and beginning barge operations throughout the Southeast.  She called the Port of Fernandina “a small seaport with huge heart and dreams.”

Secretary Wilbur Ross thanked all those in attendance, terming the city of Fernandina Beach a gem.  He cited the importance of the deepwater port and called it a gateway to the future and business opportunity.  He was especially impressed that 69.4 percent of the Port’s cargo is export, which he cited as a benefit to American businesses.  He endorsed the M-95 application as a positive means to promote business and more exports.

Ross praised Florida’s economic progress, calling its $1T GDP “phenomenal.”  He said that if Florida were a nation, it would rank 17th in world economies.  He cited ongoing efforts of the Trump administration to encourage businesses to reinvest in America and end unfair Chinese trade practices.  He remarked that while there are more than 6M unemployed today, there are 7.1M jobs going unfilled, highlighting the need to produce new workers with the proper skill sets for the jobs of today and tomorrow.

He exhorted the nation, “Export products, not jobs!”  Ross was  interrupted by audience applause several times during his remarks. 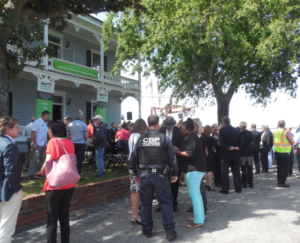 Following his remarks Ross mingled with the audience which included many port workers as well as local dignitaries before leaving for a second appearance at a gathering at the Fernandina Beach Municipal Airport.

“The visit by Secretary Ross emphasizes the increasingly significant role the Fernandina Port is playing in making this community a gateway for global trade, particularly with South America, Europe and Asia, the benefits of public-private partnerships, and in the increasing economic importance of Nassau County and surrounding areas,” says Port Director Laura DiBella.

Prior to his speaking engagement Secretary Ross toured the port facility hosted by the Ocean Highway and Port Authority of Nassau County and Aldebaran Partners, an independent global corporate advisory firm. He was briefed on recent and planned enhancements to the port including the installation in January of the towering Liebherr Mobile Harbor Crane that enables port employees to move cargo more efficiently, improve vessel turnaround and serve more ships, faster and safer.

It was also announced in February that Worldwide Terminals Fernandina LLC — which assumed the role of port operator in early 2018 when it purchased Nassau Terminals LLC – is launching a new monthly vessel service at the Port of Fernandina with SDW Shipping, a private Netherlands company significantly strengthening the port’s connections with Europe, Central and South America.

According to Christopher Ragucci, CEO of Worldwide Terminals Fernandina, modernization of the port is continuing with plans for capital investments of $15 million for additional cranes, cargo handling equipment, on-dock warehousing, and more.

“The visit by Secretary Ross is testimony to the growing strategic role the Port of Fernandina plays due to its location in the burgeoning Southeast and the excellent connections to the U.S. mainland it offers to a global network of vessels and customers,” says Ragucci.

The Port of Fernandina is a rail-served, natural deep water port on the Atlantic seaboard, just 2.2 miles from the open ocean.  It handles a variety of cargoes, including steel, aluminum, machinery, paper and forest products and consumer goods.  It has 250,000 square-feet of on-site warehouse space, 100,000+ square-feet off-port, and 10 acres of open storage, all which sits minutes away from a new six-lane A1A/SR 200 highway enabling easy access to both Interstates 95 and 10.