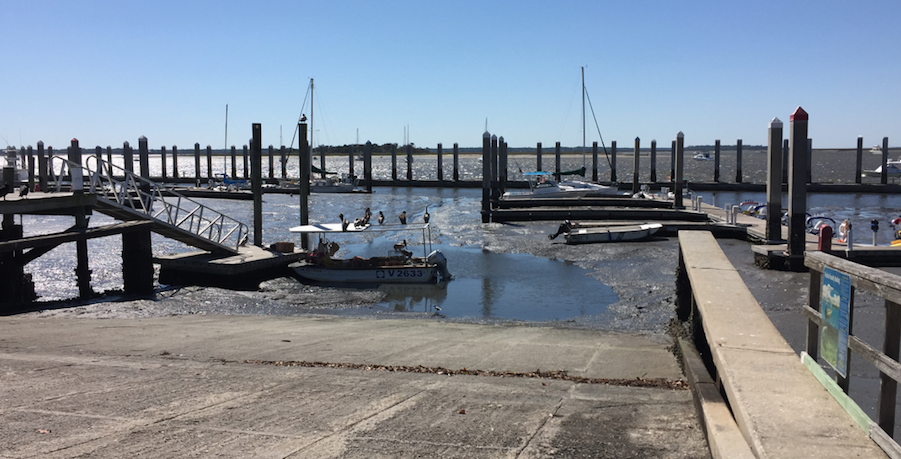 Once again, audience members plied the Fernandina Beach City Commissioners (FBCC) with questions and complaints regarding the marina repairs.  Once again, commissioners and the city manager supplied answers consistent with previous answers to the same questions asked at previous meetings. Questioners did not like the answers they received at the June 5, 2018 FBCC meeting any better than those they received at two previous meetings; city officials did not like repeating themselves and bristled at claims that they were withholding information from the public.

The video below will alow you to view the entire marina discussion.   (Of note, Commissioner Ross’ chronology  of marina repair issues begins at 22 minutes into the video.)

Commissioner Chip Ross, in a last ditch effort to put to bed rumors and false statements circulating through the community and on Facebook, recapped the entire process beginning with application for FEMA funds to make Hurricane Matthew related repairs to the city marina through to problems in obtaining repair permits from the Army Corps of Engineers (ACE) and concerns of the Coast Guard.

City Manager Dale Martin explained that there must be two requests for permits to the Army Corps of Engineers, based upon advice of that body.  The first request – to repair the south attenuator — is pending in a 408 process, the ACE equivalent of a request for a variance.  Based upon current agency guidance, a structure within 100 feet of a navigation channel cannot be repaired or replaced.  Even though ACE did initially permit the attenuator in the 1980’s at 70 feet from the channel, current guidance overrides that approval.  Hence, the need for the 408 process which is being closely monitored by Senators Bill Nelson and Marco Rubio as well as Representative John Rutherford.

The second 408 process is required to repair the existing northern section of the attenuator, which contains the fueling and pump out operations.  While the city initially proceeded to repair these facilities, their knuckles were rapped because that portion of the dock is even closer to the navigation channel.  Currently, this process is literally dead in the water.  The permit has not yet been requested, upon advice from ACE, which appears to believe it would slow the first 408 process to repair the southern attenuator.

Item 7.4 on the June 5 FBCC agenda, which directed the city manager to proceed with repairs to the fuel dock and pump out operation, was pulled from the agenda because City Attorney Tammi Bach said that doing such work without the required permits would be illegal.

Many of the marina tenants and supporters were made even more unhappy when they heard a commissioner say during a local podcast that the initial request to FEMA for assistance had “sat on a desk” for over a year before moving forward.  The request sat on a desk, but not in the city.  It was held up by FEMA inaction at the state level.

Charter boat operators complained about excess siltation, which has built up over the past two years, meaning that many of them cannot move their boats at low tide.  Others complained about loss of revenue stemming from lack of fuel and pump out services.

The best the city could respond was that assuming issuance of the first permit, work will begin immediately to fix the attenuator and dredge the south basin.  That work could be completed by the end of the year at the earliest.  With respect to the entire project, the anticipated completion is late spring 2019.

The city has done everything it legally can to move forward.  Those who are unhappy with the pace of ACE permitting were advised to contact Representative John Rutherford’s office and the offices of Senator Bill Nelson and Senator Marco Rubio to seek additional pressure to dislodge the 408 permitting process from the Army Corps of Engineers.

And just a reminder: a new hurricane season has begun.

The fact is, that letter referred to in tbe Under the 8 podcast, DID “sit on the desk for over a year”! Whether it sat on a city desk or a FEMA desk was not the point! It would not have sat on ANY desk for that ridiculous amount of time if proper and weekly follow up by our city had been constant! The exact place it sat was on the desk of the local FEMA person who was “in charge” of the paperwrok for our city! FACT.

I cannot believe this is where they’re at. For those of us moving our boats up And down the east coast twice a year we depended on the marina for a main stop. The amount of revenue lost for the city had to be substantial. Please get it back up on operating.

Here’s another Fact.! If our fair haired boy, State Senator Bean, and the other guy, State Representative Byrd, had been calling FEMA about the status of our Marina every week for the last two years, I’m sure we would have had Federal, and State monies in the Bank long ago. Guess Senator Bean was just too busy working on getting property rights HB 631 passed. God knows what Byrd has been working on,?? They do work for our Citizens Right.? What a Mess.

Sadly the “Guidances” for the Army Corps of Engineers changed so that the Corps could not give the City a permit again to put the marina back where it was. It was too close to the channel. It took a local citizen and a City Commissioner to figure out that the City had to apply for a special variance to get a permit from the Corps. In the meantime, alternative fueling situations have been discussed with the Tour Boat operator to hopefully alleviate his problem. If others are interested in these alternative fueling solutions, please contact Keven McCarthy of Amelia River Boat Tours.

Supplying answers that are consistent with previous answers doesn’t equal progress. As a representative of a small group ‘Citizens for Restoration- Fernandina Beach Harbor Marina,’ we are simply looking to have focus placed back on the Marina. Focus that is partnership driven. Our city officials may have been working on the Marina and I will believe that until facts prove otherwise but the city has not really been good stewards of Marina communication for the community. That is just my opinion. Our group wants to ‘restore’ a voice for our Marina, a voice that reaches back to Citizens and wants to partner with the city to ensure the best future for our Marina, it’s that simple. At every City Commissioners meeting there should have been Marina report-outs on the progress or stumbling blocks that the Marina is or was facing. More importantly, our Commissioners should have formed a Marina Advisory Board (MAB) a long time ago, a board that includes community citizens, but I thank Mayor Miller for now igniting that spark and I understand now that the beginnings of the board will soon be introduced. In closing, it would be nice for the Fernandina Observer to do a small piece on the Shark getting hung back up at the Marina after being down for a couple of years. This was a direct result of our group’s interaction with our members and the Mayor. Our Island. Our Marina. Our Home.