International Crane Foundation partners with White Oak; 2 chicks and their parents will be released to the wild 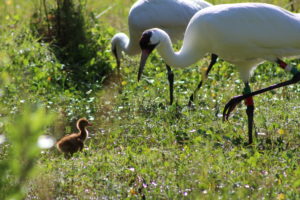 Yulee, Fla. (May 8, 2018) — White Oak Conservation is pleased to announce that two whooping crane chicks have hatched, marking the first time White Oak has successfully bred this critically endangered species. The family of four eventually will be released into the wild through a partnership with the International Crane Foundation.

The chicks are mobile and are being reared and fed by their parents, 16-11 and 18-12, at White Oak Conservation, a wildlife refuge in northeastern Florida owned by philanthropists Mark and Kimbra Walter. 16-11 is also known as Grasshopper, and 18-12 is known as Hemlock.

Each parent takes a chick for the day to minimize competition for food, and both chicks return to their mother at night for warmth. The parents feed the chicks larvae, tadpoles, grasshoppers, dragonflies and other insects, increasing their body weight by 10 percent to 15 percent per day. Their special White Oak habitat covers more than an acre and offers two ponds, natural food items, and protection from predators.

Photos and videos of the chicks and their parents are available to media outlets here. Mandatory credit: White Oak Conservation. The photos and videos were captured by remote camera, as there is virtually no human interaction with these whooping cranes at White Oak.

This whooping crane family is part of the Eastern Migratory Population, one of two experimental release programs that seek to protect the existence of this endangered wetland bird. Through decades of dedicated research and captive husbandry, the whooping crane has been kept from the brink of extinction. Only 700 to 800 whooping cranes remain in North America because of hunting, power line collisions, habitat reduction and encroachment.

The adult cranes were introduced for breeding at White Oak in October 2016, and these are their first offspring. White Oak eventually will release the cranes as a family unit, likely to Horicon National Wildlife Refuge in eastern Wisconsin, which is the original home of 16-11, the male. Both of the adult cranes were raised by the International Crane Foundation. The hope is that the entire family will migrate in the fall with other cranes at the refuge.

“Our goal is to create an international model for the humane and effective repopulation of endangered species,” Mark Walter said. “We are optimistic that, working with the other groups involved, we can successfully add the whooping crane to this mission.”

This program is managed and monitored collaboratively by the Whooping Crane Eastern Partnership whose members include the International Crane Foundation, U.S. Fish and Wildlife Service, Patuxent Wildlife Research Center, Operation Migration, the Wisconsin Department of Natural Resources, White Oak, and other partners.

“The International Crane Foundation is very forward-thinking and has been a great partner for us,” said Steve Shurter, CEO of White Oak. “Whooping cranes are a flagship species in wetlands. A thriving whooping crane population means healthy wetlands.”

“We are delighted to be working with White Oak, a great new partner for whooping crane reintroduction. The fact that 16-11 and Hemlock were paired so successfully in captivity and have now hatched two chicks is evidence of the care and dedication White Oak has given these special birds,” said Rich Beilfuss, President and CEO of the International Crane Foundation.

White Oak works to save endangered species and wild places. White Oak leads global conservation through innovative science, education, training, and collaborations. We are committed to providing conservation options for many of the species that need them the most. White Oak’s 16,000 riverfront acres in northeast Florida provide a refuge for more than 17 different endangered species. Additionally, White Oak works to help and inspire others to support conservation by hosting education, conservation, corporate and family groups for visits, overnight stays, conferences, and meetings. We are an Association of Zoos & Aquariums (AZA) certified facility. White Oak is owned by philanthropists Mark and Kimbra Walter.