Some 1,200 “March For Our Lives” in downtown Fernandina

Carrying homemade placards, sporting official “March for Our Lives” or maroon MSD Strong tee shirts, pushing strollers or being pushed in wheelchairs, an exuberant crowd gathered on the lawn next to Parking Lot C Saturday morning, and paraded peacefully in support of the students from Marjorie Stoneham Douglas High School, some of whom addressed the group and led the march.

The local group was one of thousands of “sibling marches” that took place around the world Saturday, on every continent except Antarctica. The main march, in Washington, D.C. drew an estimated 800,000.

Kayla Sanseverino, 16, a junior at Marjorie Stoneham Douglas, explained that she was vacationing on Amelia Island with her family. While some of her classmates were marching in Washington, she decided to join the protest here.

“We’re here to spread awareness,” she told the Observer, adding that “everyone would like a ban on assault weapons.”

The participants, who varied in age from toddlers to seniors, gave varied reasons for marching.

Said Fernandina Beach resident Peggy Bulger, “because in 1968, the year I graduated from high school, I was marching against the Viet Nam War. Now, for the first time in fifty years, I see a generation with the same fire.”

Nancy Dickson, another local resident, had a very personal reason for marching.

“I was a teacher, and had a gun pulled on me in my office,” she recalled.

When Ms. Dickson was teaching at the University of Maryland, a disappointed student wanted her to change his grade, and backed up his demand with a gun.

“I finally calmed him down,” she said.

While some suggested that if she had had a gun, she could have shot the student, the police officer in charge said: “No, if you had a gun, you would have been shot.”

“I’ve been focusing on preventing school violence for 23 years,” said Nathan Parker, a Georgia native who has been vacationing at this family beach cottage here since he was two years old and who recently retired as Superintendent of Schools in a large New Jersey district. He believes that School Resource Officers are not an effective deterrent.

“It would be better if police officers dropped in unannounced, randomly, on their patrols,” said Mr. Parker.

Local resident Susan Michaels focused on assault weapons: “I don’t believe they have any place in a civil society – it’s not about the Second Amendment.”

Jennifer Hutton, a teacher at Southside Elementary School, wearing a maroon MSD Strong tee shirt, was there with her wife, Natalie Corp, and their son, Xavier. Ms. Corp, who graduated from Marjorie Stoneham Douglas in 1996 said she was hopeful the students would have an effect because “it’s an affluent community, and their parents are encouraging them to speak out.”

Judy Walker, who had been a teacher at Emma Love Hardee Elementary School when there was a lockdown due to gun violence in 2006 said: “I don’t think anybody in schools should be armed.” 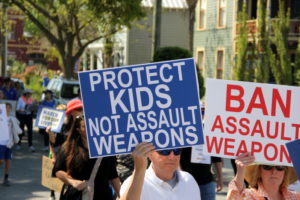 The placards were as varied as the participants: “Arm Teachers with Resources, Not Guns”. “Locked Guns, Not Locked Down.” “Listen to the Children”. “Thoughts and Prayers are Not Enough”. “Our Founders Had Common Sense, So Should We.” “It’s An Amendment, Not a Commandment”. “We Call B.S.”

One crayon-on-cardboard sign carried by Audra Murphey, a Georgia Tech student from Marietta, Georgia read simply: ”Enoug17”, with the final “H” turned into the number 17 for the victims of the violence in Parkland.

Although there did not appear to be any organized participation by local students, some did participate, including Fernandina Beach Middle School students Alina Qiu, Savanna Barnard, Carmen Flint and Georgia Bailey.

“It wasn’t an organized effort – we just came,” said Alina.

“We believe the government should give us gun control laws,” said Savanna.

Bobbie Fost, a local resident who taught constitutional history at the University of Dayton, also called for “sane gun laws.”

“When military assault weapons were banned, mass murders plummeted,’ she told the Observer. “ A ban doesn’t infringe on the Second Amendment. The Constitution doesn’t say we can’t control guns.”

The visitors from Parkland led off the speakers, with short tributes to 17 who died in the violence.

Kayla Sanseverino spoke about Scott Beigel, a geography teacher who “lost his life as a hero while opening his door to let a group of students in” and of Luke Hoyer, 15, whose smiling face adorns some of the tee-shirts worn by surviving students.

“Like many of the victims, he was a freshman, just starting his high school career,” she told the attentive crowd. “He loved his Mama, basketball, and chicken nuggets.”

Leo Scopino, 13, a seventh-grader at the middle school that adjoins Marjorie Stoneham Douglas High, spoke about Carmen Schentrup, 16, who was a National Merit Scholarship Finalist.

“Her letter came the day after she died,” he said.

He also honored Martin Duque, 14, a member of the Junior ROTC program, “who was born in a small town in Mexico”, and Cara Loughran, a 14-year-old honor roll student who loved Irish dancing.

Others spoke of Alyssa Alhadeff, the captain of her soccer team, who played the best game of her life the night before she died. And Christopher Hixon, the school’s wrestling coach and athletic director, a retired Iraq war veteran. And Alaina Petty, who volunteered in the Helping Hands program at the local Church of Jesus Christ of Latter-Day Saints. And Meadow Pollock, a senior who had been accepted at Lynn University in Boca Raton. And Helena Ramsay, 17, who was active in the Model UN, and Nicholas Dworet, a swim star who had been recruited by the University of Indianapolis and who dreamed of swimming in the Olympics. And Gina Montalto, an artist and a Girl Scout. And 14-year-old Alex Schacter, who played the trombone for the Eagle Regiment Marching Band. And Aaron Feis, the Assistant Football Coach, who rushed into the school and acted as a human shield to protect students. And Joaquin Oliver, 17, who left Venezuela as a toddler and became a U.S. citizen just a year before his death. And Peter Wang, 15, born in China and a member of the Junior ROTC program, “last seen wearing the gray uniform with black stripes as she held open the door so others could escape. “ And Jaime Guttenberg, a dancer and dog lover, who wanted to be a mother and an occupational therapist, like her own mother.

After that very moving requiem, march organizer Christine Platel, called for a moment of silence, and then introduced Chief Hurley, who began his long police career as a patrolman in Fort Lauderdale.

“This is personal to me,” said the Chief. “My late father-in-law was the Chief of Police in Parkland, and I’m close friends with the detective working on the case… Since Sandy Hook, there have been 400 people shot in 200 schools around the country. Where is the public outrage? You need to get angry before you get action, and I think we’re there.”

But, he added, “any discussion needs to be done carefully.”

This addition brought shouts from an impatient crowd: “What about assault weapons?”

“You’ve said at least a thousand words, but you haven’t mentioned assault weapons!” someone shouted.

“I think I addressed that,” answered the Chief. “I said we had to go to our legislators.”

A teacher from Fernandina Beach Middle School, who asked that her name not be used, bemoaned the lack of participation by local students.

“Where are the students from our high school?” she asked, and there were a few scattered shouts of “I’m here.”

“They’re afraid to be here – afraid they’ll get labeled as a liberal or a snowflake, “she added.

Chryl Anderson of “Moms Demand Action” had to be helped up to the podium.

“Physically, I cannot march – my words will march for me,” she said. “Every day, 47 teens and children are shot. Thousands of our young people won’t walk across the stage at graduation.”

Kayla Sanseverino thanked the crowd “on behalf of my school.”

“Children shouldn’t have PTSD every time they hear a loud noise,” she told the cheering attendees. “Seventeen beautiful young lives are not just another number. We’re not asking that all guns be banned – just to take away weapons made expressly for mass murder.”

At the signal, “let’s march,” from organizer Christine Platel, the eager crowd lined up behind the Marjorie Stoneham Douglas group bearing their maroon banner and proceeded up Ash Street.

There were people with canes, people with pink hair, people leading dogs of all – and indeterminate – breeds, from tiny lap dogs to a lumbering Great Dane. A small boy carried a sign: “Let’s be responsible adults”. Another sign featured a big red heart and the words “Organizing, An Active Form of Grieving.” A group of men held a banner from New Vision Congregational Church in Yulee. (Other local churches were conspicuous by their absence.)

The parade turned north on 6th Street, past the people lunching al fresco on the terrace at Pepper’s, then down Centre Street and into the home stretch.

Brenda Kayne led a group of friends who write postcards to legislators every week at her 8th Street yoga studio.

Jennifer Harrison, marching with her husband Michael, recalled the time just after the Sandy Hook tragedy when she and her friend Maggie Carlson circulated a petition calling for a ban on assault weapons.

“We got 2,000 signatures and delivered the petition to Sen. Bill Nelson, but never heard back,” she said. “I bet today we could get 10,000 signatures.”

The parade was as sunny as the weather, and without hecklers. There was, however, a car flying Confederate flags, which parked across from Parking Lot C and later cruised Centre Street. Some march participants identified that as a counter-protest.

The driver of the car could not be reached for comment.

P.S. We don’t need more studies. Let’s just ask Canada, Australia, or any country in Europe if we can borrow and copy their gun control laws.

Nice fanatical anti 2A Leftist spin. Those Countries do not compare in population or constitutional culture. You’re always welcome to leave once great Fernandina and move to one of those countries along with every other ultra Left Liberal. Another one sided article using children as props for an agenda. Join the NRA today!

The other half of REAL America who disagree veitmatly they don’t qualify to the elitist freedom robbing fanatical Lefties. Other good Americans opinions don’t count or are excluded to Liberals. Disgusting.

Sorry Andrew. It is what it is – and we are what we are. As a registered GOP voter and veteran, it is my considered judgement that the NRA, and it’s corrupted politicians are a major part of the problem.

Today, 75% of Americans want more gun control, up 68% from last year. Millions, (liberals and conservatives, children, parents and grandparents, teachers and law enforcement) marched in 800 cities around the world in lock step with the Parkland students….1,200 in Fernandina Beach. Remington filed for bankrupcy today. No-one is moving out of our fair city. “The Times They Are A-Changing.”

One of the democratic rights of the United States, the Second Amendment to the Constitution, gives the people the right to bear arms. However, there is a greater right; the right of human dignity that gives all men the right to defend themselves.