Toby Tovar and Christine Harmon, representing the Amelia Island Beach and Marine Life Task Force delivered a slide presentation to the Fernandina Beach City Commission (FBCC) on March 20, 2018 to dramatically underline the consequences of litter for marine life and shorebirds. They provided information about the organization they have self-funded to bring awareness to the problem and try to enlist local government in enforcing existing regulations as well as providing increased public education on the size and depth of the problems affecting our beaches.

They have sounded an alarm regarding the potential for increased adverse impact on local beaches coming from rising tourism and residential population growth.

At the end of their presentation, they presented the FBCC with a specific request: dedicate the resources necessary during the Memorial Day through Labor Day beach season to enforce anti littering ordinances and clean beaches on a daily basis. They have asked for the creation of a beach patrol. 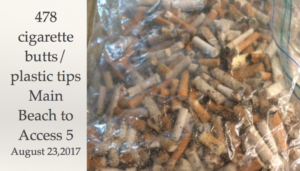 Harmon and Tovar realized the scope of environmental problems caused by humans when they began walking the beaches trying to do their part to clean up the aftermath of indifferent beach visitors following July 4th celebrations last year.

What they have found during their informal patrols has been dismaying, and in some cases, downright disgusting: cigarette butts, dirty diapers, broken toys and beach furniture, glass bottles, fishing line, and just about anything else that would normally belong in a trash receptacle. Audience members reacted with gasps to some of the slides in their presentation. 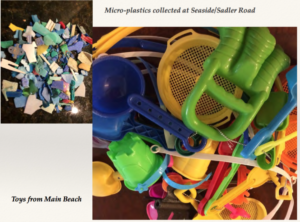 Tovar spoke to the urgency of the situation in light of increasing numbers of tourists and area residents. He called for a proactive beach patrol that would not only clean the beaches but also provide citations to violators.

The organization plans to work with city and county government officials to insure existing beach ordinances are reviewed, amended where needed, and enforced. They also will engage with and encourage the Amelia Island Tourist Development Council and local businesses “to absorb their costs of doing business.” And they will advocate for additional resources for maintaining clean beaches and an environmentally healthy ocean.

City Manager Dale Martin responded by addressing the Police Department’s creation of a beach patrol, known as the Beach Rangers. City commissioners suggested this initiative during their annual visioning session. Currently it is staffed by off duty personnel, but Chief Hurley is developing a plan to implement this patrol as soon as possible. Martin said, “It requires training and staffing, but I think we are moving in the direction that this presentation suggests.”

For more information on the Task Force or to volunteer to assist, people are invited to contact Christine Harmon or Toby Tovar via email. The Task Force also maintains a Facebook page: Amelia Island Beach and Marine Life Protection Task Force.

This is a much needed initiative and should be embraced and supported by the City and County. It’s unfortunate that we need to have citations to enforce common courtesy and respect for the environment, but that’s reality. Much thanks to Ms. Harmon and Mr. Tovar for their proactive work!

Respectfully hoping for two things here. 1.) Any plan put into place should be a coordinated venture between the city, the county and (to a lesser extent) the fort/state. We are one island with many thousands of visitors and residents enjoying all sections of our pristine beaches. Having different rules up and down the beach with different enforcement practices will not help us cure the problems. It will only add to the headaches. We need one comprehensive, coordinated & cohesive approach with buy in from all stakeholders. 2.) The debacle at Peter’s Point on President’s Day was not inside the window of Memorial Day to Labor Day or even turtle nesting season. Indeed spring breakers from around the region are just getting warmed up at this time. Efforts to monitor the beach and enforce regulations for health and public safety should be a 365-day a year program. If you think that folks who want to come here (or who already live here) who plan to “party hearty” won’t figure out when we have our guard up and when we do not, you are kidding yourself. Our goal for our island beach ordinances and their enforcement should be to establish an effective program that is easy to understand no matter where you plant your beach chair. IMHO, cooperation and consistency among the various jurisdictions is the key to being effective. It’s hard work just to get the parties to the same meetings but I do believe it will yield a better, more lasting and cost effective result than the every-man-for-himself strategies currently being employed.