Heads up on 2018 local elections 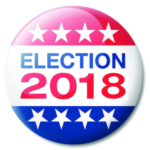 Nassau County voters will once again have an opportunity to go to the polls in November to decide some important local races, in addition to so-called off year elections at the state and national level.

County offices up for grabs as of this writing include two County Commission seats, three School Board seats, and three Ocean Highway and Port Authority (OHPA) seats. Although it is early in the election cycle, the following have already filed to run for election (or re-election):

All those who have filed to date to run for County Commission and OHPA (partisan races) are Republican. School Board races are non-partisan.

Municipal races will also be held this fall. While no one has filed as yet to run for two seats on the Fernandina Beach City Commission, incumbents Len Kreger and Roy Smith have publicly announced their intention to seek reelection.

In Callahan, Martin Fontes has filed to run for Mayor.

What strikes me as odd is Robin Lentz and Donna Martin are both teachers and are political allies for the most part. There is an “old trick” in Nassau County where the incumbent does their “hand picked” successor a “favor” and pretends to seek their old seat for appearance purposes as a way of “clearing the field”. Then the day before qualifying they just withdraw and allow the “chosen one” to qualify unopposed. Pay close attention to these school board seats, they pay $30,000 a year and will likely become more powerful if certain constitutional amendments are passed in 2018.

Doug Adkins I assure you I have no intentions of withdrawing from this race. For you to imply that I would stoop to that level of dirty politics is offensive and insults my integrity. Anyone that knows me can attest to my character and would know that I would never play this game and that the only reason I am running is to serve my community.

Well glad to hear you have made a “commitment” for now, but it is a fact in local public school elections the switch and bait tactics were regularly used to ensure the establishment preserved their choice candidates. Hopefully we will be able to learn more about your positions on the constitutional revision commission proposal that are being considered, the proposed $0.50 sale tax increase and the proposed impact fee increase we keep hearing is coming. The continued reliance on common core remains a concern for many and I am sure you will be able to articulate whether your support the continue reliance on common core or adopting text books locally. The local legislators Bean and Byrd both have supported HB 7069 ( schools of hope) and now appear ready to also support HB 7055 the new bill that will allow kids who are bullied a chance to seek another school option. All these issues are important to the direction of public education and the development of our workforce. I also think that maybe you should consider whether the school board should vote on the dual enrollment agreement between the Florida State College of Jax and the School District, this agreement involves a transfer of school district funds I am told of $70,000 annually each year to the FSCJ and the language in the articulation agreement for Nassau is different from the one used in Duval in that the Nassau agreement restricts access choice and access to campuses that best suit students. The articulation agreement for this dual enrollment program really should come before the full school board for a vote since public funds are being transferred to the FSCJ. Hopefully as the Chair of the School Board and Executive Director of the FSCJ you can clear up the dual enrollment issues and explain why this does not come up for a vote when so much public money is changing hands and why the articulation agreement includes such restrictive language.