The Fernandina Beach City Commission (FBCC) conducted its annual visioning/goal setting workshop on January 24, 2018 at the City Golf Course Clubhouse. Originally billed to begin at 9:00 a.m. and last until 3:00 p.m., the meeting adjourned just before 1:30 p.m. Most of the FBCC discussion occurred around goals identified by the commissioners individually. During the final twenty minutes of the meeting, commissioners prioritized the list of two dozen individual goals to identify those that will constitute overall city priorities for the year ahead.

When individual commissioners’ votes were tallied, the composite scores showed that the Amelia River front and the marina rated highest, followed by the FBCC’s charge to introduce project management for major city initiatives and to develop strategies. Rounding out the top three was an emphasis on developing policies and means for increased conservation of undeveloped land.

The next three priorities included revisiting the density issue, beach parking and “leashes on the beach.” 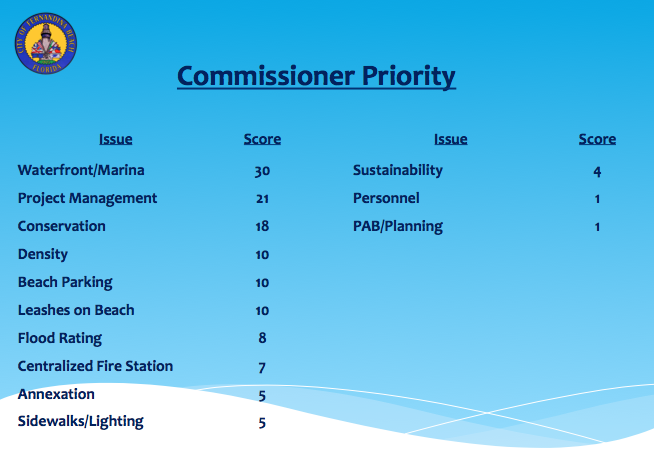 As Commissioners looked over the prioritized list, City Manager Dale Martin said that staff would begin translating these general topics into specific action items. The list will return to the FBCC for formal adoption at a Regular Meeting in the near future. Martin added that items that did not make the final list of goals would be taken under advisement by staff as opportunities for the future.

City department heads and other staff joined the Charter Officers for the workshop with the FBCC. About 25-30 members of the public attended some or all of the session, with some representing organizations such as Main Street, the Tourist Development Council, and the Amelia Island Tree Conservancy. 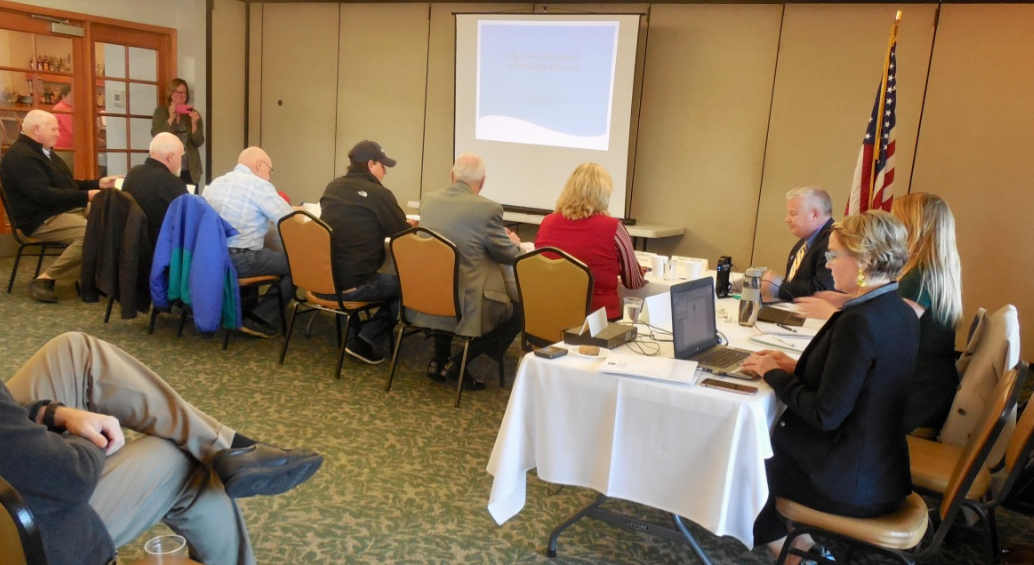 Unlike previous goal setting workshops that involved outside facilitators, lengthy staff presentations and/or videos, this year’s focused entirely on the priorities of the five city commissioners, both individually and collectively. Even the room set up guaranteed that full attention was directed toward what commissioners wanted. Commissioners sat with their backs to both the audience and the staff table. Their input was added to a slide presentation that was updated in real time and projected on a screen that they faced. There was no public input, and staff only responded to commissioner requests for information.

City Manager Dale Martin briefly reviewed commission goals set last year before asking the commissioners to set policy and direction for the city by proposing their goals for the year ahead.

Commissioners shared a common goal to fix the city marina and the Amelia Riverfront. Collectively they ranked this their highest priority. But not before also voicing dissatisfaction with the manner in which the city has been pursuing these improvements.

Commissioner Chip Ross, who brought the largest number of goals to the session, championed the city’s introduction of project management to insure that major public capital projects have clear, transparent milestones and accountability to help the public understand progress and obstacles, along with a deadline for completion. Other commissioners and the city manager supported this approach as well. Commissioner Philip Chapman asked that communication be improved as well to ensure that the public has every opportunity to keep up with progress.

Ross suggested that a goal should be to make the city marina operational by the end of 2018. Mayor John Miller appeared to object to this, saying that the marina should be made operational as soon as possible, explaining that not all aspects of the project are under the city’s control. Ross acknowledged that there are always valid reasons for altering timetables, but that realistic metrics and milestones should be established to keep projects moving forward.

The question of needing additional parking to accommodate new residents as well as increasing numbers of beach goers generated considerable discussion, sometimes heated. Ross suggested that the Planning Advisory Board (PAB) be tasked to study this issue both in the downtown and beach areas.

Four commissioners were in agreement on introducing paid beach parking. Commissioners appeared to favor “free parking” for those island residents who pay the “Sand Tax,” while looking to manage spaces and raise revenues for beach safety and improvement via parking fees to be collected from other beach visitors. Ross did not agree, saying that fees would not solve the parking problem.

Vice Mayor Len Kreger said that the FBCC would soon receive a Beach Master Plan from city staff, suggesting that further discussion be delayed until that plan can be reviewed. Mayor John Miller reminded commissioners that with the development occurring off island, beach traffic would be increasing as well.

Commissioner Roy Smith once again raised the possibility of building an additional downtown parking lot on city owned property on the east side of North 11th Street between the Water Department and School Board property. Ross suggested that the PAB could consider that as part of their charge. Smith snapped at Ross following that suggestion, disagreeing that “everything should be pushed to” the PAB. Streets Manager Rex Lester and Utilities Director John Mandrick both weighed in on Smith’s idea, explaining that any lot built in such a location would need sidewalks to connect it to downtown and that early maps show both a deep well and an Indian mound on that property.

Commissioners seemed to prioritize beach parking over downtown parking, saying that downtown parking issues were more related to the condition of existing parking areas, sidewalks and a need for lighting than the need for more spaces.

Commissioners acknowledged the need expressed via the recent citizens’ survey for more conservation lands. Kreger said that in the survey 40 percent of the respondents expressed a willingness to pay additional taxes to achieve this goal. Ross suggested changing the city’s Comprehensive Plan to allow for purchasing land for conservation of wetlands and green space, much as the existing language allows for the purchase of beach property.

Commissioners expressed a desire to revisit the density issue. Kreger said that he was not proposing a change to the recently adopted downtown density, but he was looking for additional public discussion. He expressed his opinion that the change was not well understood because unlike changes to density along 8th Street, this change had not undergone as many public discussions. Kreger also indicated that for additional housing opportunities to become a reality along 8th Street, the city should consider further increasing density in that location.

This issue appeared on the final list of priorities as “leashes on beach,” but in fact covered a wider discussion.   Commissioners discussed what appear to be perennial complaints regarding dogs and horses on the beach. There was a general acknowledgement that there are already ordinances dealing with these issues, but the challenge is finding a reasonable way to enforce them. Ross suggested that the goal should be for the city to change or enforce the ordinances in a “cost effective way that does not involve uniformed officers.”

Centralized fire station. Chapman reminded commissioners that this item appeared on a list of city goals as far back as 2016, and that it should be a priority. Fire Chief Silcox was asked for input on the concept of closing existing stations and replacing them with a new one at the airport to serve the entire city. Silcox said that in making decisions to locate fire stations, there are response time criteria set nationally that must be met. He acknowledged problems with Fire Station 2 at the beach, but said that the location is important for responding to beach emergencies. The commissioners asked for a study and recommendations.

Annexation. Commissioners expressed a desire to establish “annexation strategies” for those properties desiring to be annexed into the city. Currently, property owners are required to sign annexation agreements if they want to be connected to city water and sewer. Such agreements in some cases are implemented immediately. In other cases annexation is delayed until the subject property becomes contiguous to the city. Commissioners asked that other conditions be attached for those properties not immediately annexed, such as paying for police and fire protection.

Sidewalks/lighting. Commissioners expressed concerns that the absence of sidewalks and adequate pedestrian lighting creates safety hazards throughout the city. A mobility plan is due to be completed soon, which will help in determining which areas of the city should receive priority consideration for installation as part of the city’s Five Year Capital Improvement Plan.

Sustainability. Mayor Miller continues to champion sustainability initiatives, such as increased use of solar panels, for the city.

Personnel. Commissioners identified relatively few personnel needs for the city. Chapman continues to advocate for a full or part-time arborist. Ross called for a planner to be devoted completely to PAB planning initiatives. Commissioners underscored the need for a full time procurement specialist. These goals will be considered in greater detail as part of the FY 2018/19 Budget planning.

PAB/planning. Commissioner Chip Ross introduced the notion of rethinking the work of the PAB from merely reactive to more proactive. He raised a number of concerns relating to milestones included in the city’s Comprehensive Plan that have not been met, such as the housing needs assessment and neighborhood planning. Vice Mayor Kreger agreed that by charter and ordinance the PAB could have a more proactive approach to city planning.

Many other ideas surfaced during the meeting that did not receive enough votes from commissioners to be included on the final list of prioritized goals. City Manager Martin said that these would be identified as opportunities for staff investigation. 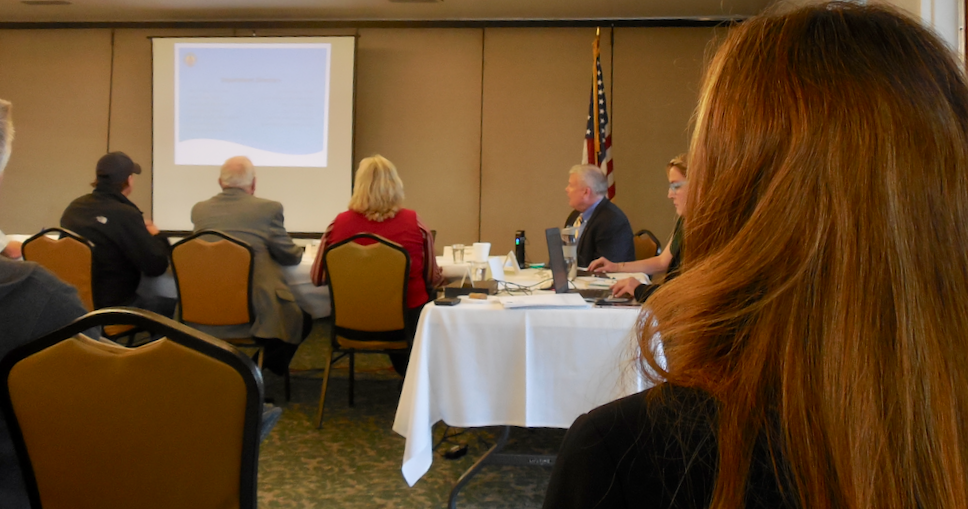 City Manager Dale Martin, in addition to reviewing progress against last year’s goals, provided status reports on some city initiatives. He cited current negotiations with Advanced Disposal on a new waste removal contract.   Because all commissioners do not share the same expectations, he suggested a workshop next month to finalize details for the negotiations.

Martin also reported that the city is reviewing its purchasing policies and would recommend holding off on any personnel decisions until that process has been completed. He reminded commissioners that many city facilities are aging and that before investing heavily in repairs, consideration should be given to the buildings’ realistic life expectancy. He indicated that the city continues to work on improving the special event process and will bring forward a report for consideration at a Regular Meeting.

Martin reported that there is an interest in possibly forming a citizen support group to focus on maintaining and promoting Bosque Bello Cemetery. City staff is working with the group organizers.

He suggested that the Code of City Ordinances needs review to update or remove outdated ordinances (example: rules for hitching horses).   Although there has been recent discussion about locating a luxury motor coach in the city, currently the Land Development Code does not allow for such a use within the city.

City Attorney Tammi Bach reminded commissioners that some thought should be given to forming a Charter Review Committee. The last committee made recommendations in 2005, and such a review is recommended every 5-10 years.

Excellent. Kudo’s all around.