Last night’s Regular Meeting of the Fernandina Beach City Commission (FBCC) didn’t have a prayer … literally. The designated preacher did not show for the usual prayerful invocation. Other than Phillip Scanlan’s presentation on behalf of Amelia Bike Trails that packed the house, the agenda was relatively light. With only two Resolutions to be considered and some commission discussion over upcoming workshops, the meeting adjourned at 8:00 p.m.

Commissioners appear to becoming more comfortable with each other following recent elections that resulted in two new commissioners joining the FBCC. They expressed eagerness to work on visioning and goals for the new year, beginning with an all-day FBCC workshop scheduled for January 24, 2018 at the City Golf Course beginning at 9:00 a.m. 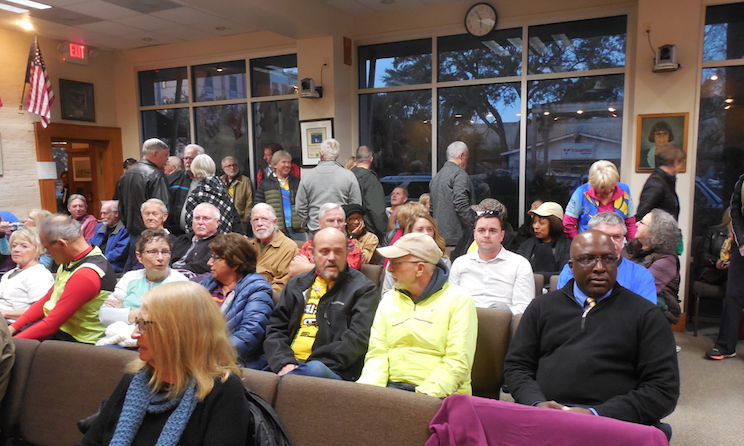 With a chamber full of bike and trail enthusiasts behind him, Phil Scanlan, the CEO of Friends of Amelia Island Trails, Inc., walked commissioners through a 23-slide presentation touting the benefits of expanding and improving the island bike trails as part of the East Coast Greenway (ECG), which was 30 percent completed as of 2017.

Scanlan stated that his organization’s goal is to help Amelia Island become the best place in Florida to walk, run and bicycle. He said that bike trails help to connect existing parks as well as helping people get from home to work. He explained that multi-use paths and bike lanes (10 feet wide) cost about the same as 5-foot wide cement sidewalks, including construction and maintenance. He claimed that with connectivity achieved via multi-use path and bike lanes, residents would be able to connect to about 50 percent of the island in 30 minutes.

Citing a recent survey, Scanlan said that 76 percent of residents ranked maintaining and expanding sidewalks and bicycle paths as Number One Priority. He reported that 85 percent of new Amelia Island trails constructed between 2009-2017 are multi-use paths and bike lanes. 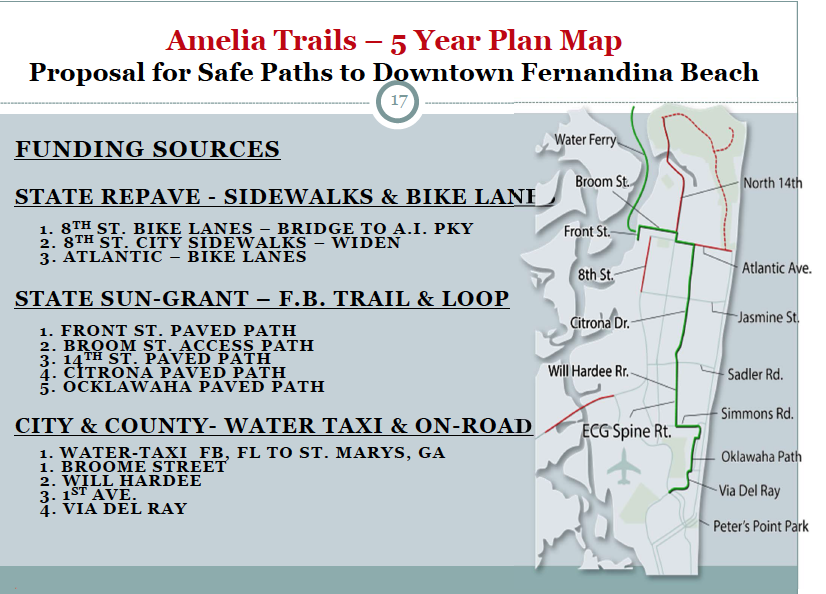 On behalf of his organization he presented a Five Year Plan that would increase multi-use paths 270 percent. The plan proposes a Fernandina Beach trail that would run from Front Street to Peters Point and a Fernandina Beach – Old Town – Fort Clinch Loop. He also cited incentive funding needed for a Florida-Georgia water taxi service as part of the East Coast Greenway. 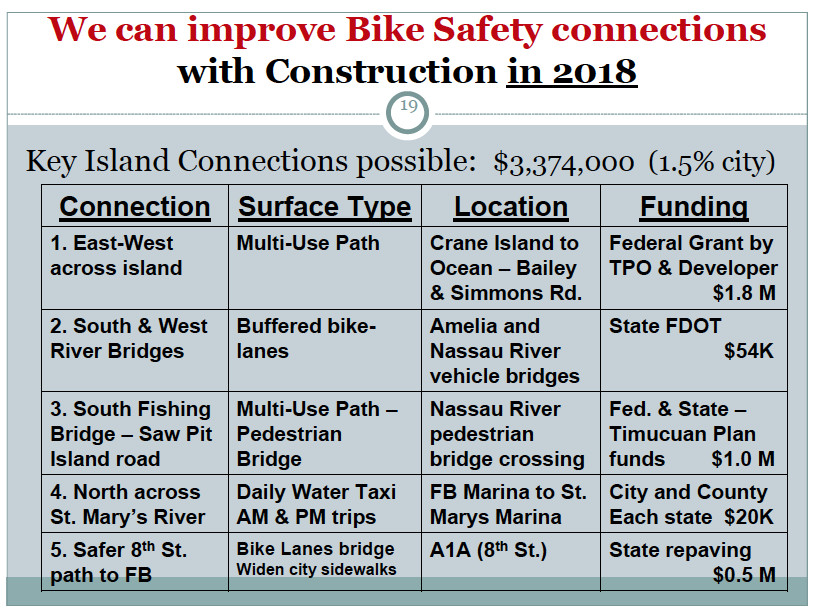 Scanlan acknowledged that plans are contingent upon federal, state and local funding. He said that without local funding from Fernandina Beach and Nassau County, chances for securing the major funding from state and federal grants are slim. He suggested that Amelia Island Trails needed an annual budget of $350,000 for improvements and maintenance of existing trails. He asked the city to consider providing 10 percent of their annual transportation budget: $50,000. He indicated that he would also be asking the county, which has a $5M transportation budget, for $300,000 annually, since the area receiving direct benefit covers two county districts. 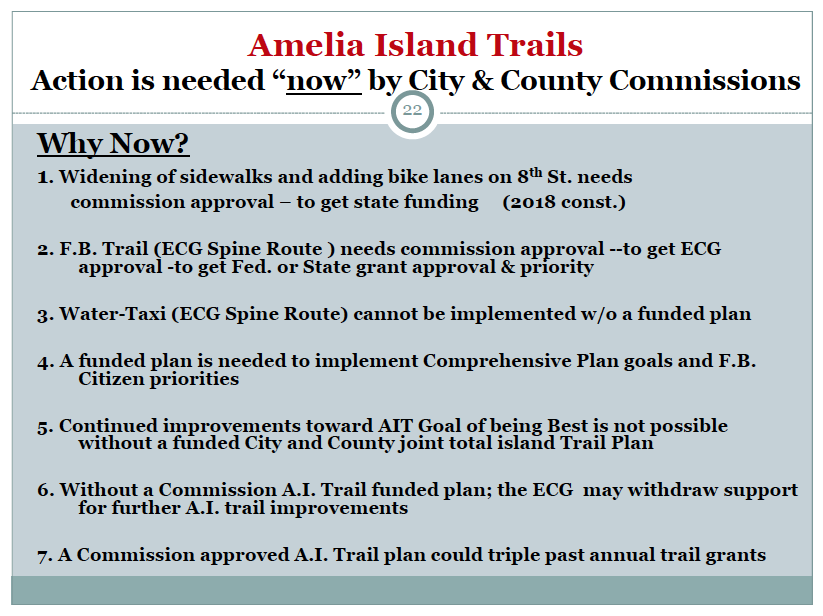 City Commissioner Phil Chapman asked Scanlan if he had pursued corporate grants for the projects. Scanlan replied that the developers of Crane Island had promised $300,000, but that corporate grants are difficult to find. He said that local government support from both the city and the county was the best way to get to work on additional public funding. Without that support, grant funding from state and federal agencies was problematic. 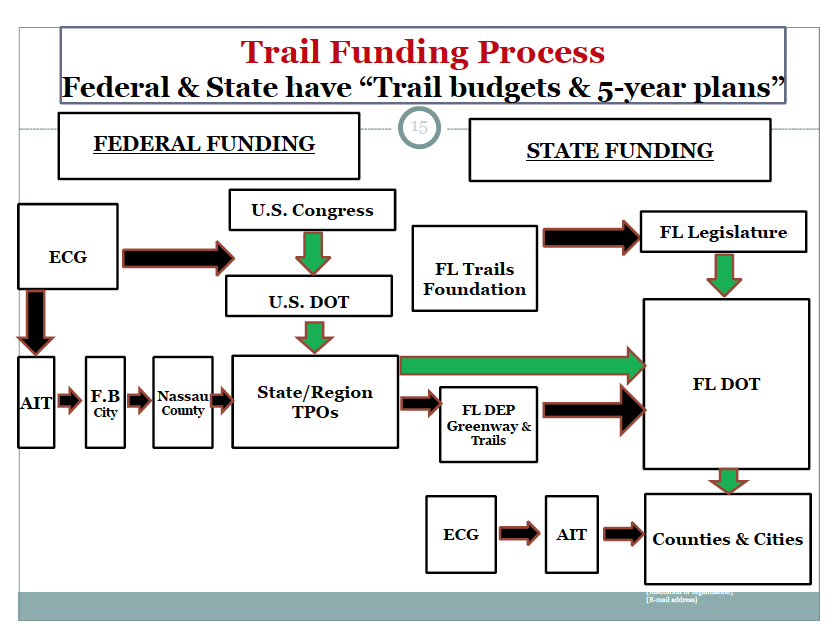 City commissioners appeared to be very supportive of Scanlan’s efforts in principle. Vice Mayor Len Kreger reminded Scanlan and the audience that the city had always been supportive of efforts to promote bicycling. He cautioned, however, that the city must look at this issue along with many other issues such as road maintenance and repair. He agreed that spending money on such projects would be a good investment for the city.

Commissioner Chip Ross suggested that the city use $50,000 per year from the city’s recreation impact funds to support this effort. Mayor John Miller agreed with Ross. While there was no agreement to adopt Scanlan’s funding request, it was the consensus of the commission to ask staff to prepare a Resolution to formalize city support at a future meeting.

Scanlan thanked the commissioners and his supporters, who had applauded his presentation at several points. He said that his next step was to secure support from the Nassau County Board of County Commissioners (BOCC).

If the BOCC meeting on January 17, 2018 was indicative of the county’s support for such a project, Scanlan will have a hard sell in front of him. Although County Commissioner Danny Leeper (District 1) raised Scanlan’s request to present his proposal, commissioners were glum on funding prospects, citing the many challenges facing the county after years of what Commissioner Steve Kelly (District 2) termed “kicking the can down the road” with respect to keeping up with funding necessary to support maintenance and growth.

Commissioners and city staff agreed that recent work to repair the timber walkway in connection with repairing fuel lines resulted in a visually jarring contrast between the old sections and the newly replaced sections of the walkway. Because the repair work came in $6,000 under budget, the resolution recommended a change order to the original contract in the amount of $10,000 to replace all the old decking to match the new.

Commissioners Chapman and Ross appeared to question why such circumstances had not been foreseen and avoided in the original contract. Vice Mayor Kreger and City Manager Dale Martin explained that the city had not known in advance how much the repairs would cost. When it appeared that the original project would come in under budget, the city agreed to augment the contract savings with an additional $4,000 to do the full replacement.

Resolution 2018-6: Authorizing the city to enter into negotiations with Advanced Disposal in response to RFP 17-06 for a franchise agreement for waste removal

The Evaluation Committee recommended that the City Commission to approve entering into negotiations with Advanced Disposal.

Tal Johnson, representing Bobcat North America, the firm ranked second, asked the FBCC to allow his company to make a presentation on their services before making a decision to negotiate with Advanced Disposal. Johnson stressed that the city would be Bobcat’s only client, and that they would propose innovative solutions and methods to the city’s waste handling challenges. Johnson said that by issuing an RFP as opposed to an Invitation to Bid, the city had indicated that they were interested in more than just a low bid.

Greg Huntington, representing Advanced Disposal, reminded the FBCC that his company had outscored their competitors by significant margins during the evaluation process. He indicated a willingness to discuss solutions to the downtown problems and recycling during the negotiation process.

While Commissioner Ross seemed amenable to allowing Bobcat to make a presentation, both Vice Mayor Kreger and Commissioner Roy Smith expressed their satisfaction with the process that led to Advance Disposal’s selection. Kreger reminded commissioners that if the city was not able to come to terms in a contract with Advanced Disposal, the city would then proceed to enter into negotiations with Bobcat as the second most qualified bidder.

The resolution was approved on a 4-1 vote with Commissioner Ross dissenting.

I saw this post on facebook and commented …Why are there prayers at a government meeting? Is a Muslim cleric allowed to offer a prayer? What about a wicca follower? Curious about this policy…. I’d still like to hear that policy for clarification.
As far as bike trails or hiking trails. I think those should be supported. The group of people this appeals to are physically active and environmentally aware. Generally something positive for the future development of the island. As far as the marina repair goes…hard to comment on that as I keep thinking if someone gave me $10,000 I would happily replace some boards that matched the ones there. I am sure I am not fully informed on the details of that so I will withdraw the comment. A bit off topic, I will say the marina situation is a disgrace. Lets either get rid of it or fix it. Having it drag on like this is not in anyone’s interest.

Chris, US Supreme Court ruled in 2014 that having a prayer at the start of a meeting of a governmental body is not in violation of the Constitution. My understanding is that the City allows any religious (or non-religious) organization to offer the invocation based on a master list used on a rotating basis.
https://www.usatoday.com/story/news/nation/2014/05/05/supreme-court-government-prayer-new-york/4481969/

Per Suanne’s subsequent article on the County Commissioners meeting, the BOCC has ixnayed any thought of funding for bike trails due to their current financial crisis.

Ok good to know thanks Dave.