Fernandina Beach City Commissioners spent close to an hour of their November 8, 2017 Regular Meeting discussing the construction and financial agreement between Eight Flags Aviation, LLC (8FLA) and the city, clarifying cost shares, and returning the nose and tail design elements to the airport terminal currently under construction. Following discussion dominated by questions from Commissioner Roy Smith and a detailed recapping of the project provided by Airport Manager Nathan Coyle, the FBCC voted 4-1 (Smith dissenting) to approve Resolution 2017-184.

By approving this Resolution the FBCC has authorized execution of Change Order 1 to construct and install a nose and tail for the General Aviation Terminal Building. This Resolution also authorizes the City Manager to negotiate and execute a ramp management agreement with Eight Flags Aviation to manage and collect fees (30% of these fees to be paid to City) for the publicly funded ramp apron currently controlled by the City.

In October, 2015, the City Commission approved execution of a Fixed Base Operator Use and Lease Agreement authorizing Eight Flags Aviation, LLC to operate as a fixed base operator as of April 1, 2018, in the City’s new terminal building. The City Commission also approved a contract to construct a new Airport Terminal, designed to suggest an F4U Corsair, which flew out of the Fernandina Beach Airport when it was a Navy facility in the 1940’s. The terminal will be occupied by Airport staff and rented by Eight Flags Aviation, LLC. Eight Flags Aviation has offered financial contributions, in the form of prepaid rent to be repaid in rent credits over time (50% of rent offset in rent credits and 50% rent paid to City by Eight Flags), toward the design and construction of the new terminal and other Airport improvements, including upgrades to the fuel farm and ramp apron improvements. 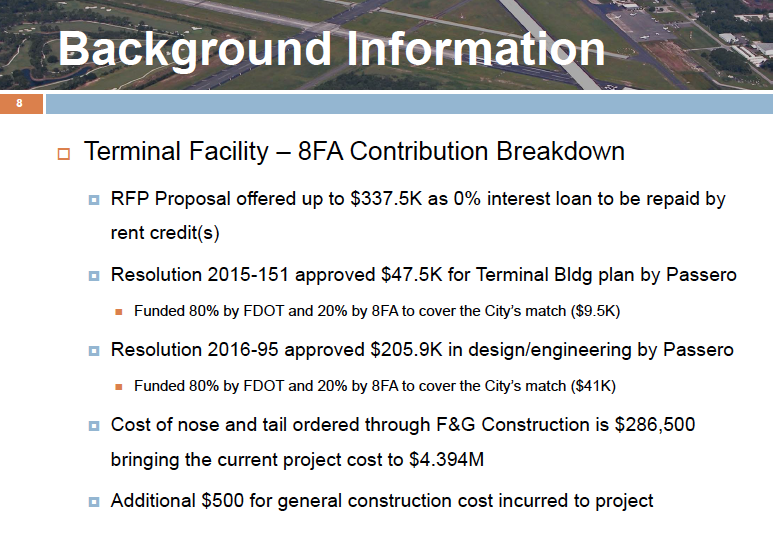 Commissioners questioned Brian Echard, 8FLA President, on his financial contributions to the project. Smith was especially concerned that Echard would contribute more than a no-interest loan in terms of rent credits going forward. Echard explained that he intended to invest $500K in building improvements, including a $75K-model of the F4U Corsair that would stay with the city owned building. 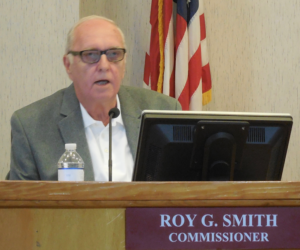 Smith continued to revisit his concerns with the building’s design and questioned various costs based upon his past experience as a contractor working on FDOT projects. He objected to spending high dollar amounts on tail and nose design elements that he felt would have no useful purpose for the terminal.

Commissioner John Miller took issue with his comments on the design, stating that many of the historic buildings on Centre Street have been enhanced by design elements that have no useful purpose. Miller said he feared that if the FBCC did not approve this resolution to add the nose and tail to the terminal design, the airport would become a stop on the trolley tour, where guides would point out that the building looks like “half a plane” because the Commission that approved it reneged on part of the design. “I don’t want there to be a joke about that building,” Miller said. Other commissioners agreed when Miller went on to say that he envisioned the new terminal building as a cover story for many aviation magazines because of its unique design.

Commissioner Tim Poynter said that the building will be a “fantastic asset to the city,” reminding commissioners that they had voted to approve the design when it came before them with recommendations to approve from the Terminal Design Committee and the Airport Advisory Committee. “It isn’t taxpayer dollars, no matter how many times people say that. This is not coming out of city ad valorem taxes.” He asked, “Do you realize how much income is generated for this city from this airport? Do you really think we would have a Concours [d’Elegance] here without this airport, five minutes away from the Ritz, where all these rich people that everyone wants to criticize are flying in to buy a million dollars worth of cars and then flying out?” Poynter cited TDC estimates of a $17M economic impact on the city for that weekend alone.

Poynter moved and Miller seconded approval of the resolution.

Sean McGill, representing current Fixed Base Operator McGill Aviation, suggested that 8FLA could walk away from the contract with no penalty. City Attorney Tammi Bach said that was not the case, remembering language that she had inserted in the contract during negotiation.

Smith continued his arguments against approval of the change order and the addition of the nose and tail sections. It was explained that the approval would not add cost to the project, which had value engineered more than $295K to lower the initial cost, more than enough money to cover the addition of $286,500 to complete the corsair design.

Ground has already been broken on the new terminal building, which will be nearly complete by the time 8FLA assumes operational responsibility for the airport on April 1, 2018. Final work cannot be completed until McGill Aviation’s lease expires, as various future drainage areas are on land in McGill’s leasehold. That work should be completed by summer 2018.

Just can’t believe we’re back to this. $4.4 million dollars, What’s that, a $3,000,000 override of the first est. for this welcoming center/terminal. The Commissioners continue to say, “These aren’t your tax dollars” No perhaps not, but they are someones tax dollars. FAA grants are someones tax dollars at work. Our tax dollars are funding someone else’s nutty idea of building a Bridge to nowhere in Utah. Our local fly-boys who utilize this air field would be happy with a Quonset Hut, an air sock and lower Av-gas prices. The rich dudes that fly in are not interested in grabbing a cup of Joe, and hanging around the old air field and talk to the locals. What a Monument to an ego. If only half the effort was put into the Marina at our River front we would have one by know. A $3,000,000 override? Give us a break. Please

I qualify as one of those local fly-boys at my Martin County airport and have to say Steven Crouse is right on the money. As a matter of fact with all the available internet based flight planning software I have not visited our FBO for years. We get quite a few corporate and private jet traffic and I have noticed the passengers are usually met by a car and leave immediately. Flight crews are the only ones I see at our FBO and I am sure they will not care about your nose and tail as long as there is coffee and a restroom.
I recall several years ago someone had the hair brained idea to add soaring wings to the front of one of the terminals at FLL. The first storm tore them to shreds. Good luck with your wings. I just hope they are not aerodynamic!