On April 9th Fernandina Beach HS based club ultimate frisbee team went to Sanford to compete in the Florida Ultimate Frisbee State Championship. Having won their previous tournament at University of Central Florida, coach Tom Rowan, a 30 year veteran of the sport, felt the pieces were in place for a deep run at States.

“The last time we won States (2014) we also won the UCF tournament. The team has been playing well and our team chemistry is good.” The 2016 Dina-Soars didn’t disappoint. They went undefeated in four games in their pool. They were the one seed in pool 2 of two pools of five teams. The most surprising win was the last game of pool play versus a very physical team from Oviedo. “I knew they would be tough but I didn’t expect the outcome in such a lopsided victory. Oviedo played us very tough in Gainesville at the beginning of the season. I honestly didn’t think what happened would happen.” Dina Soars rose to the occasion winning 7-2 on nine possessions. “That’s almost impossible. The team was fired up.” Said Coach Tom. Having won their pool they entered the Semis against a rival from Tampa Bay, Fire Ants coached by veteran Steven Widoff. “Steven coaches a good game. His teams are always very quick and almost surgical with their throws” 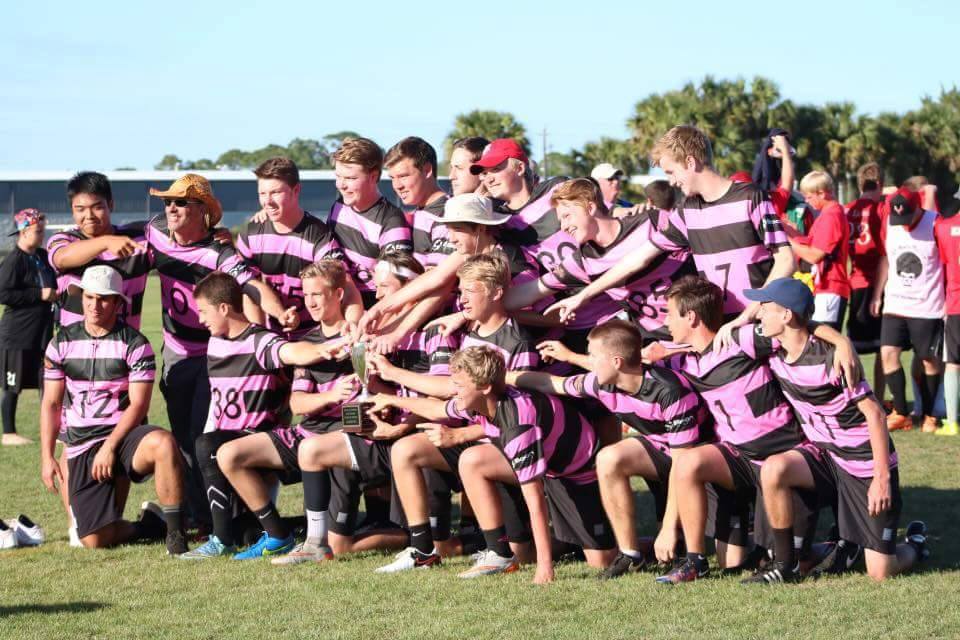 The game was coached a little different by Coach Tom as he let his team Captan, Chase Langford, call his subs. “Chase, up to that point of the tournament, was really dialed in. He knew who he wanted on the field. It actually let me focus more on strategy. Time management stuff and zone scheming.” Chase did not disappoint. He led his team to victory using his best physically fit players like Topher McCranie, Philip Johnson and Henry Arato. “Topher was the real catylist for our defense. Our zone funnels all action through him and his quickness baffled most everyone all day.” Dina Soars went on to beat Fire Ants 12 – 10. The score was closer than the action suggested since the time alloted for the round ended when the game was 12-9.

The Fire Ants insisted playing the last point so Coach Tom emptied the bench to allow the starters some rest time. “We had a final to play in ten minutes. My guys needed some rest.” The final was against another rival, Verocious of Vero Beach. Coach Tom wasn’t too concerned. “We beat them twice during the year.”

The game proved more difficult than previous games with Verocious as the Dina Soars were without Henry Arato and Phillip Johnson. That’s when Chase Langford, senior Jenkins Mock and upcoming sophomore Brendan Dunham stepped up. “Jenkins is a great offensive player but in the final he stepped up his defense. Brendan used his height to score three goals and make three assists.” At the end the Dina Soars prevailed and won the championship 13-10 winning States for the second time in their fourth year of existence. They last won in 2014 and came in second in 2015. “We win because we run the team as a democracy. Everyone can contribute their ideas and I think the kids truly respond to that. We also win because we are a very close knit team. We spend a lot of time together on the field and on social media.”

For more on how ultimate frisbee is played please visit either Www.usaultimate.org or YouTube Ultimate Disc.

Editor’s Note:  Hats off to the Dina Soars and to their Coach Tom Rowan.  Having watched Tom coach the team in a practice session, I was impressed with Tom’s dedication, patience, and coaching abilities.  Tom loves the sport and he is a gifted coach.  Thanks Tom for sharing this article and for making time for our young people!

Congratulations Dina Soars and special thanks to Coach Tom for giving his time and energy to the team.

As reading this back I love my dad so much on he coached the team for the win! GO DAD!!!!