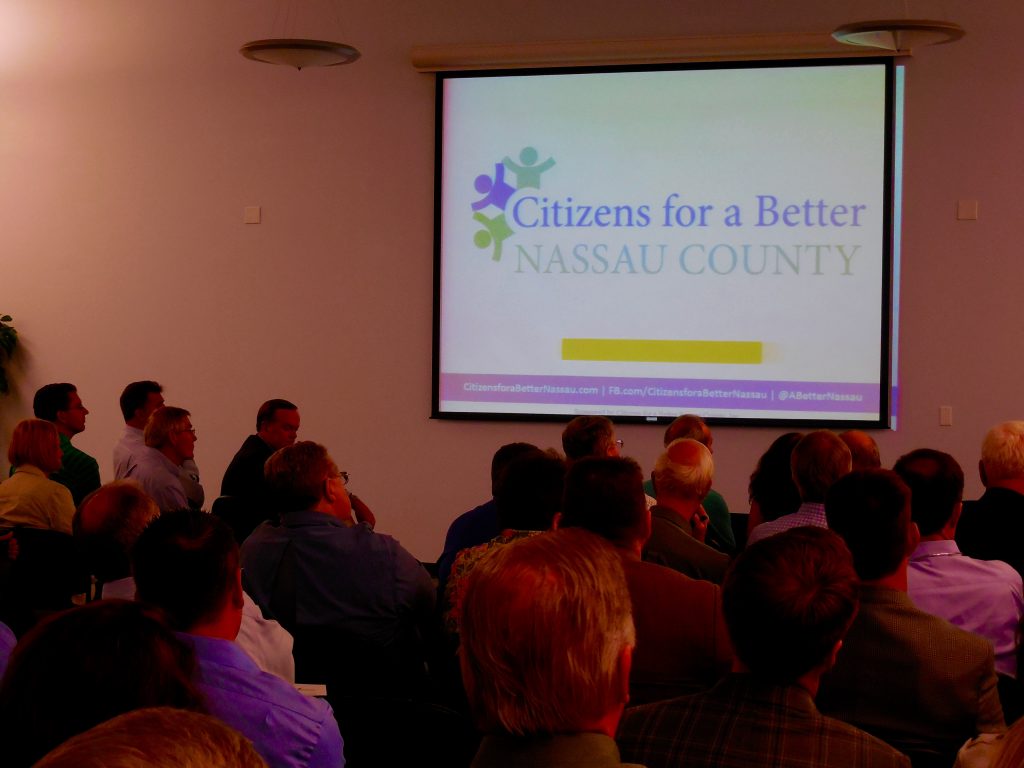 Citizens for a Better Nassau County (CBNC), a non-profit organization focused on raising awareness of the importance of financial sustainability, hosted its first public meeting on April 12, 2016 at the Florida State College at Jacksonville, Betty P. Cook Nassau Campus, Red Bean Center Building. About a hundred people listened intently as speakers explained the county’s current and anticipated budget situation as affected by fallout from the recent economic recession, the state’s Save Our Homes laws, and policies adopted by the Board of County Commissioners over recent years.

The meeting featured Shanea Jones, director of the Office of Management & Budget and assistant county manager of Nassau County, as well as Brian Martin, a vice president of Robert Charles Lesser & Co. (RCLCO), who presented an analysis on the fiscal sustainability of Nassau County. Robert W. Spaeth, CBNC co-chair, moderated the program and also delivered remarks.

In opening the presentation, Spaeth stressed that CBNC is a 501(c) 4, non-political organization, dedicated to informing voters about what is really going on in Nassau County. Spaeth suggested that a small group of people within the county has tried to undermine the organization’s credibility by circulating statements that are untrue.  The organization is prohibited from endorsing any candidates. Spaeth emphasized the education mission of his organization.

In quoting from a White Paper he authored entitled “Financial Sustainability of Nassau County,” Spaeth cited independent sources confirming that the county is facing a looming fiscal crisis that could lead to the insolvency of the county, downgrades of the county’s bond rating and the inability of the county to meet its financial obligations. In addition to the county Office of Management and Budget, third-party sources that Spaeth cited included: Fitch Ratings, Purvis Gray & Company, LLP; and Burton and Associates.

Spaeth said that while the county is solvent this year, the situation will go downhill quickly over the next few years. Spaeth and subsequent speakers attributed the crisis to the nationwide Great Recession of 2008-13, the county’s heavy reliance on residential property taxes to fund government services and maintain assets, and the unintended consequences of the Save our Homes Amendment to the Florida Constitution which went into effect in 1995.

During the Great Recession, the County Commission opted not to raise taxes as a way to relieve citizens who were already enduring economic hardships. Instead, after cutting county expenses severely and eliminating 67 positions, they embarked on a course of spending down unrestricted cash reserves to make up for tax revenue shortfalls. Spaeth credited the County Commission with compassion for the citizens. But in light of the slow recovery, the county’s inability under law to quickly readjust assessments on homesteaded property, and over reliance on residential property as its tax base, the financial picture for the county is not turning around as quickly as anyone had hoped.

Spaeth wrote, “The commission has done everything in its power, but given the depth and length of the downturn, they also had to severely cut into reserves, which are set aside to meet any unexpected costs that may arise in the future, as well as the future costs of upkeep, to balance its budgets, and raise the millage rate by only one mill in 2014, which the county had held off doing for six years. However, these strategies have only bought the county time, as real, strategic problems still lie ahead with the impending fiscal crisis the county is facing.”

Shanea Jones, Nassau County Budget Director, followed Spaeth with charts and graphs demonstrating the decline in unrestricted reserves and income between FY2003/4 to the current Fiscal Year. She explained that almost all county revenues come from ad valorem taxes and the one-cent sales tax. Countywide taxable value peaked in 2007, declining to a low in 2013 before once again beginning to rise. However, most of the value is derived from reassessments with very little of the value attributable to new growth. In 2003, the County Commission began lowering millage rates to lower taxes for property owners.

Because the county commission would not raise millage rates when the economy and property values dropped, in 2010 the original annual budgets began to show a gap between budgeted revenues and budgeted expenditures. Despite significant cutbacks in personnel, the gap continued to grow. Faced with the choice of either burdening taxpayers during the recession or spending down county reserves, the county opted for the latter. She presented a series of graphs tracking the history of county revenues and expenditures over the past years, which are presented below: 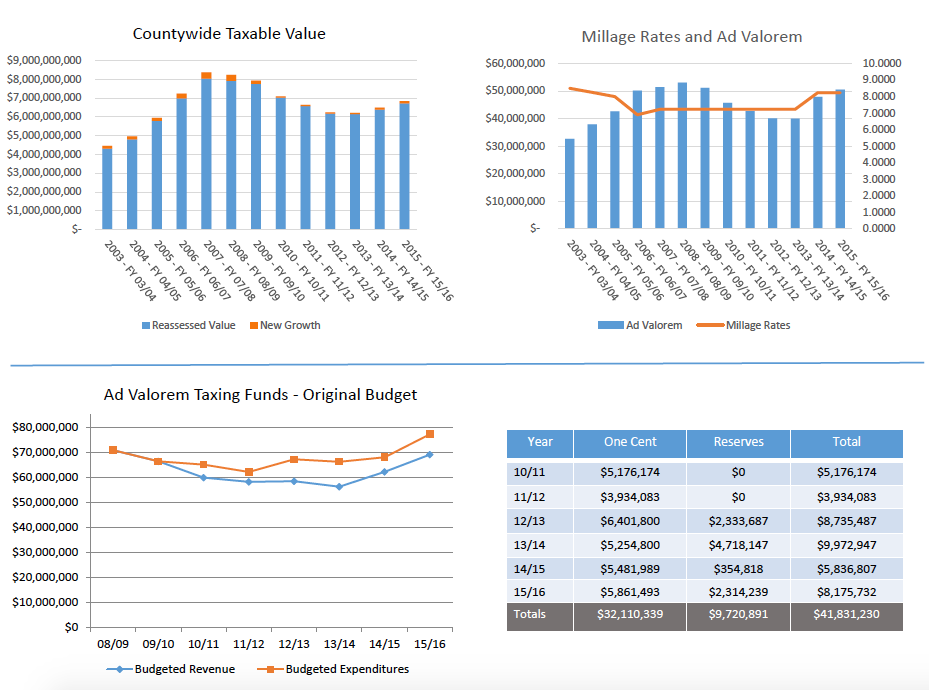 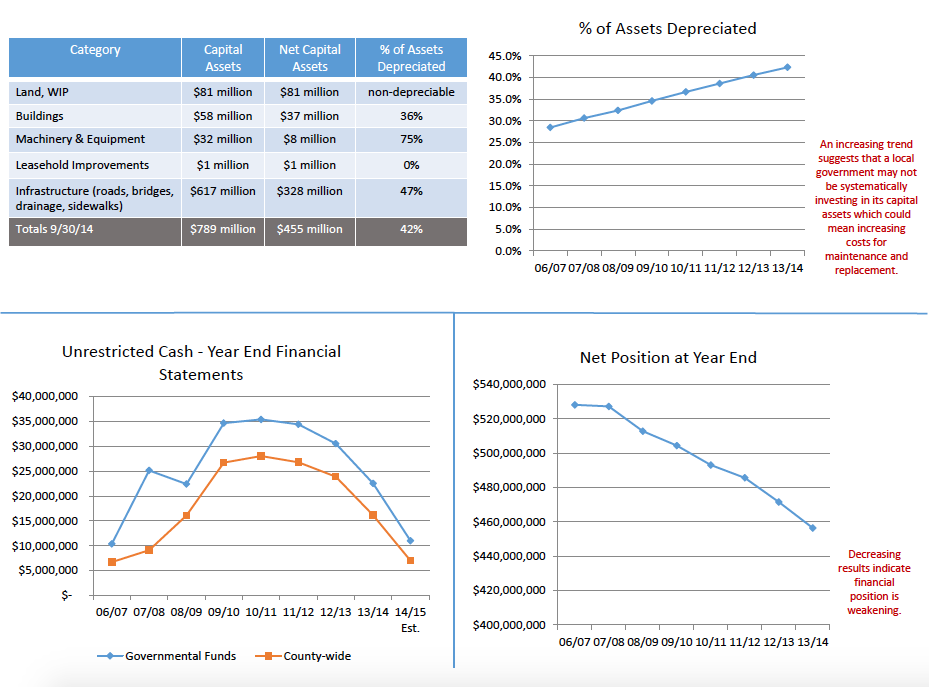 By spending down what had been healthy financial reserves, the county is now looking at a situation like the one encountered in 2004, when its credit worthiness was in jeopardy. Jones reminded the audience that the County Commission removed funding restrictions for the one-cent sales tax revenue, originally instituted and designated specifically for capital improvements. Those funds were reprogrammed to the General Fund to help maintain county services during the Great Recession. As a result there is little money remaining in the Capital Improvement Budget beyond 2017. She also said that roads are the most expensive element of the Capital Improvement Budget. Nassau County has over 800 miles of county roadways more than half of which are not paved and are expensive to maintain.

She added that the BOCC’s financial policies require the county to maintain a minimum unrestricted reserve of two months’ operating expenses in case of emergency.

Jones concluded by advising the audience that there is currently more money being spent than is being collected. The BOCC has opted to fund capital improvements, such as the new Sheriff’s Building from reserves as opposed to borrowing money. The reluctance to borrow money to fund capital projects and the general economic situation with respect to growth and taxation have left the county with almost no unrestricted reserves to bridge the gap.

Brian Martin, a vice president of Robert Charles Lesser & Co. (RCLCO), presented an analysis on the fiscal sustainability of Nassau County, comparing it to other Florida counties with similar population size. Martin presented several charts showing that more than other similar counties with a more diversified tax base, Nassau County relies almost 80 percent on residential taxes. He suggested that other counties are in better shape financially because of a greater industrial, commercial and professional tax base.

In concluding the formal part of the program, Spaeth held out some hope for improvement down the road, if not immediately. He commended the Nassau County Economic Development Board for aggressively pursuing industrial opportunities. He cited both the Crawford Diamond on the west side of the county near Callahan and the opportunities presented by the East Nassau sector plan just east of I-95 and beginning with the Wildlight community. Both areas are primed for development. However, economic benefits that might be derived from that development are several years off and dependent both on county incentives and citizen attitudes toward increased development. 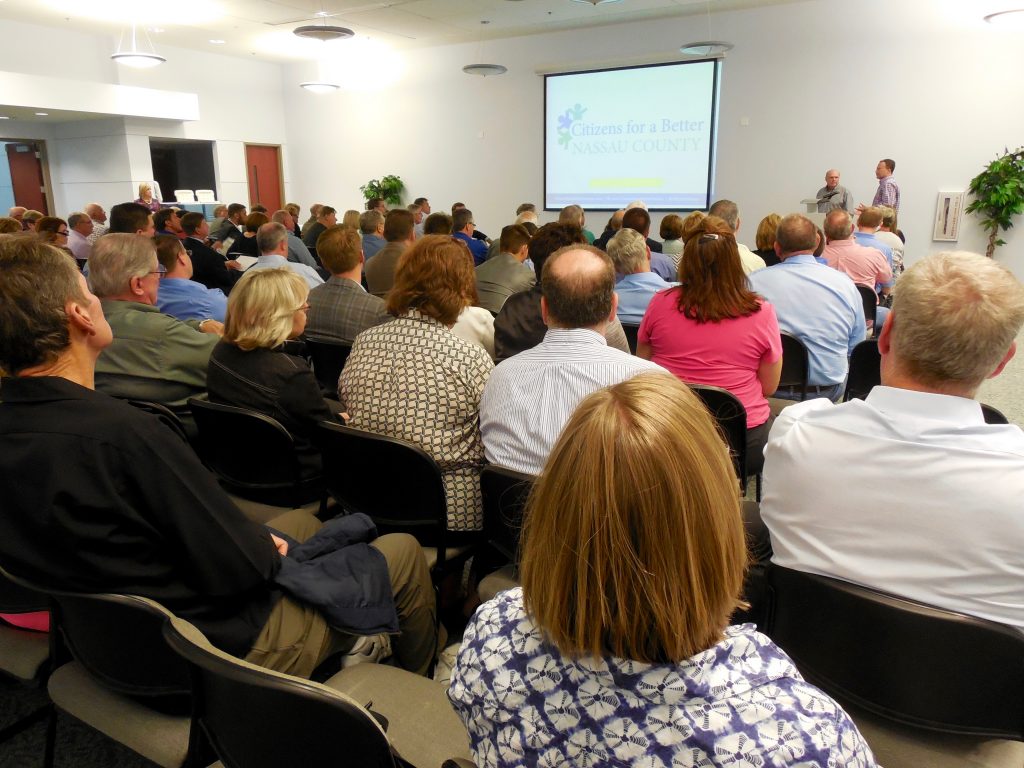 The audience listened attentively to the presentation and held its questions until presenters had concluded. Some of their questions included:

Q: What is the situation regarding funding county pensions?

A: County employees are covered by the state pension system. Pensions are 88 percent funded, a healthy situation.

Q: Which area of the county generates the most property tax revenues, and which area receives the most services?

A.: Amelia Island produces 60 percent of the property tax revenue. Most of that revenue is spent off the island.

Q: What will get us through the next 2-3 years?

Q: If there is an upswing in growth, will that adversely impact our A-rated schools?

A: Industrial development does not require schools. The school system does projections to determine when and where new schools are needed, but generally, according to audience member Dr. John Ruis (Superintendent of Schools), schools must demonstrate that they are overcrowded before new schools can be authorized.

All audience members found at their seats folders with information on Citizens for a Better Nassau County as well as copies of presentations provided during the hour-long session. Several current and former county elected officials attended in addition to some candidates for 2016 elections.

While there had been rumors of planned protests, none materialized.

“‘Citizens for a Better Nassau County’ is grateful for all those who were able to make it to our first public meeting,” said Robert W. Spaeth, co-chair of ‘Citizens for a Better Nassau County.’ “Brian gave a thorough and thought-provoking presentation on the financial sustainability of Nassau County, stressing the need for the county to look toward ways to diversify and broaden the tax base, in order to decrease the county’s dependence on residential property taxes to fund all government services.”

“This was a great event, and we thank Brian and Shanea for taking part in it,” said Jimmy Higginbotham, co-chair of ‘Citizens for a Better Nassau County.’ “Our main goal with this public meeting was to start up an honest conversation with all members of the community on the fiscal standing of the county, and I think we brought that about tonight.”