The Fernandina Beach City Commission (FBCC) delivered one proclamation and listened to three presentations at its Regular Meeting held on May 19, 2015. Additionally, two members of the public thanked the city for assistance, and another advised on Fire Department issues.

At the request of Vice Mayor Johnny Miller, the FBCC recognized Brandon Drakus for his valuable contributions to the City of Fernandina Beach in providing litter control, trash pickup and janitorial services at City and County beach accesses and public restroom facilities. Mayor Ed Boner delivered the proclamation recognizing that Drakus since 2009 has volunteered countless hours and donated many acts of kindness while performing janitorial services to keep beach areas clean. Miller specifically commended Drakus for his compassion in dealing with the homeless, who must use city facilities to tend to basic hygiene needs. Mayor Boner encouraged all citizens to emulate the spirit Mr. Drakus demonstrates. 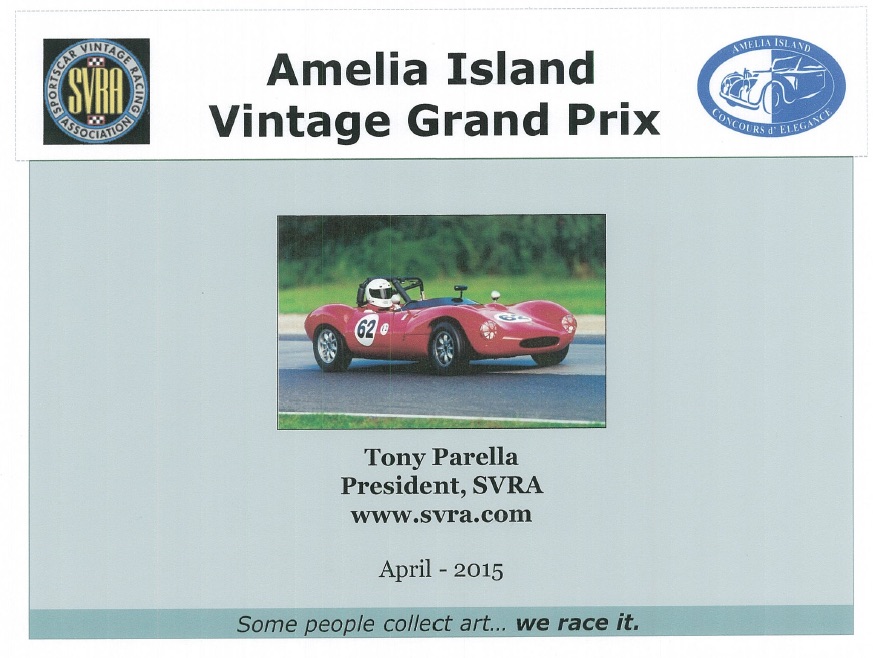 Mr. Tony Parella, owner of Sportscar Vintage Racing Association (SVRA), explained his proposal to hold a vintage sportscar racing event at the Fernandina Beach Municipal Airport the week after the 2016 Amelia Concours d’Elegance. Parella, who was accompanied by Ralph Thomas, said that SVRA is the largest vintage racecar association in the nation. He said that he has chosen the airport site as the best place to hold a “meaningful event” on the East Coast. 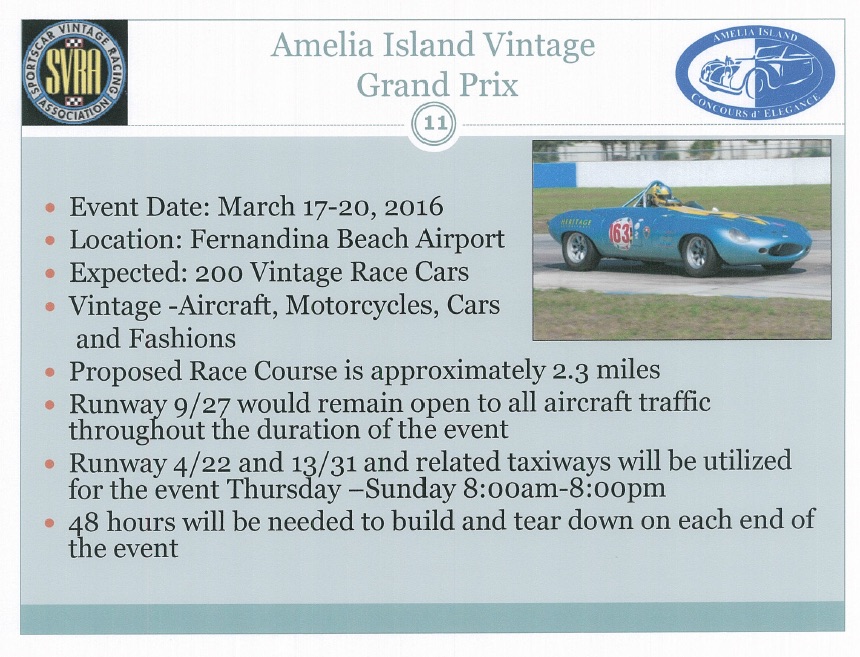 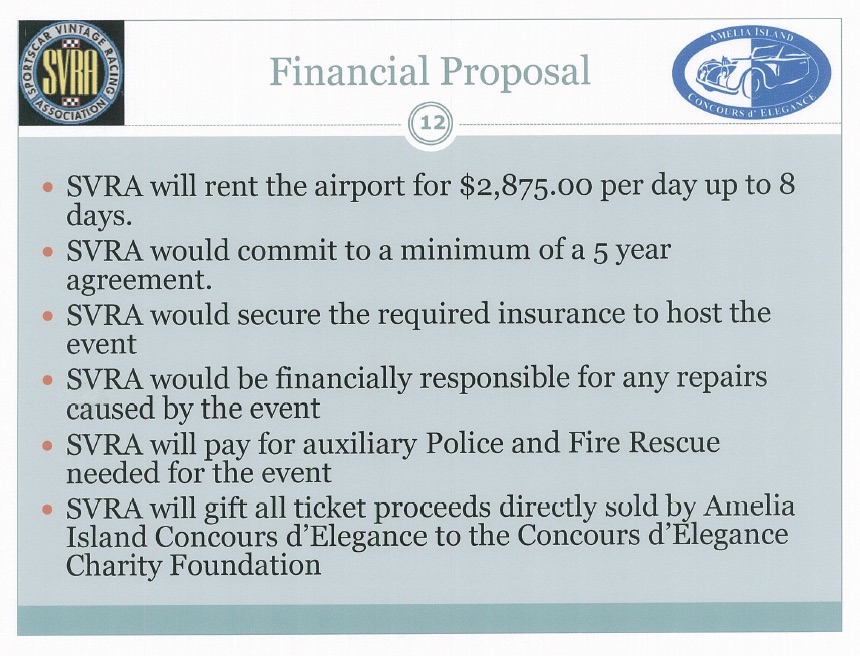 The plan is to close the two instrument approach runways for 8 days, which allows for a 4-day event and two days at each end for set up and take down. He anticipates that about 200 cars would participate. Cars would be limited to vintages that would create the least noise for the surrounding area. Parella said that “people of wealth” participate in this sport and that there would be a strong, positive economic impact for the city and the island.

The city Airport Advisory Committee (AAC) has endorsed the concept, according to Chair Richard Gray, but not without some trepidation over closing the runways. Gray said that the AAC decided to approve the plan because they believed it was in the best interests of the city.

The next step is to get FAA approval, which could take six months. The FAA could also deny the request over concerns about impact to airport operations. Parella said that SVRA would like to enter into a 5-year contract with the city for annual events and would ensure that the airport would be in better shape after each event than before. 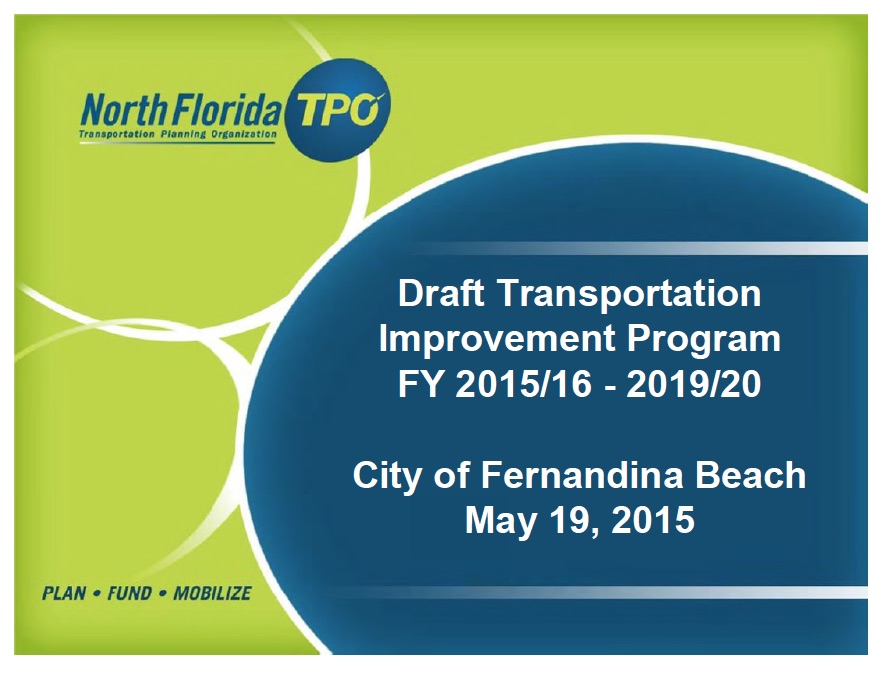 Milton Locklear, Transportation/Planner/Modeling Specialist, presentedNFTPO’s annual update on its short-range transportation projects for Nassau County/Fernandina Beach east of US 17. The draft plan is scheduled for final approval at a public meeting that will be held on June 11, 2015 at 10:00 a.m. at the North Florida TPO Building, 1022 Prudential Drive, Jacksonville, FL. Local projects planned or underway include:

Commissioners Pat Gass and Robin Lentz urged NFTPO to consider adding sidewalks and road improvements to North 14th Street north of Atlantic Avenue to Pogey Place. In response to questions about adding a crosswalk to Atlantic Avenue at Citrona, Locklear advised that such a project required approval from FDOT, because Atlantic Avenue is a state road.

Lynn Williams advised the FBCC that he has received permits from the Army Corps of Engineers and DEP to proceed with his dredge test. He said that the proposed dredging can be done at low cost but does not yet know the speed at which the dredge works best. He said that he believes the dredge will not create turbidity problems, but will report to the FBCC at greater length in mid-June.

Harry Harrison and representatives of the 2015 Shrimpfest Committee thanked the city for its help during this year’s festival. Harrison said that relocating the Fun Zone to its new location in Central Park seemed to work. He indicated that the committee would like to talk to the city in more detail in 60-90 days following close out of this year’s event.

Local resident and handicapped advocate Marlene Chapman recapped events over the past couple years to get a sidewalk constructed from Centre Street to the Salty Pelican. Accompanied by her

wheelchair bound daughter and son-in-law, she explained that patience, especially in dealing with needs of her children, was not her long suit. After failing to get access problems solved locally, she sought help from state and federal authorities. She acknowledged that the process had to await settlement of a lawsuit, which did not occur until December 2014. She said that work on the sidewalk finally started Monday and that the progress in only a day has been remarkable. She told commissioners, “If something comes up that is not going the right way, I will be here. People told me, ‘back off,’ ‘leave it alone.’ But that’s not part of my spirit. So the sidewalk is under construction and hopefully soon we’ll all be able to enjoy it and move on to another project. For those who did help, I want to say thank you.”

Joe Hernandez, a retired fire chief and former Fire Department employee, suggested that the city has a “phenomenal opportunity” to avoid past missteps by utilizing an external assessment center, composed of subject matter specialists, to set benchmarks for qualifying as chief and deputy chiefs. He said that to suggest that “on the job training” is sufficient to qualify for such positions is not factual and does a disservice to people at all ranks in the department. The assessment center he advocated is used throughout the country and provides a standard for fire chief selection. It removes local bias from the selection process. Those external subject specialists have significant experience in all the required disciplines, which provides a rational basis for candidate selection. Hernandez said that applicants for the Fernandina Beach position need to understand that this is not a job “to retire to.” The selected applicant needs to be intimately involved in all aspects of fire and emergency services that can occur in the city. “In a small municipality,” he said, “[the chief] needs to be a working beaver in the trenches with the troops.”

Im proud to say that Mrs. Marlene Chapman is my mother in law or just mom. Advocate just is not a good enough word to describe my mom. I would call her our rainmaker. Along with my dad, she has been an integral part of our lives together. No matter the battle , they have tirelessly worked to make mine and their daughters life as smooth as that new sidewalk. When handicapped rights are involved, we will be there. Every fight, meeting and hearing will be attended by one of us because it is important to us. We just dont babble or point fingers. We actually WORK, volunteer and lead by example. At the end of the day, it was only a sidewalk but to know that a simple sidewalk could cause such bickering and pandering is mind boggling. Im just glad that its over and I just want to thank my mother and father in law for the hard work and steadfast determination that they exhibited. It means the world to your kids. Tenacity. Something that we will never ever apologize for. Thank you to all who helped. Me and my wife thank you all. Kinney Leonard and Taylor Leonard.

Surprised that the AAC would “sell their soul” and agree for an almost complete closure of the airport for 8 days in exchange for $20 – $25,000/year. Yes, these are wealthy people and they will be spending money in the City at retailers and restaurants, but I suspect most will get their lodging on the south end due to the proximity to the airport and, well, they are wealthy people. I understand these are not Formula 1 or NASCAR cars and their “racing” is more of a spirited contest, but I would trust that if this goes through that the City ensure that SVRA has deep pockets and/or a strong insurance policy to cover possible damage to the runways and a performance bond to guarantee the payment to the city (airport enterprise fund). It will be interesting to see what the FAA decides but if the City supports they would be hard pressed to halt even though it is a non-aeronautical use of the airport property. It certainly will create a new type of event. Maybe the Goodyear or MetLife blimp will come to provide aerial coverage.

Dave, the perception of these guys in the SVRA as vary Rich, and there is that. But the Majority of these folks have had these cars for years. you can find them in middle class neighborhoods, in garages all across the country, under an old tarp. Each year in the fall, these cars show up in Watkins Glen New York for a weekend. Great fun, good economic shot in the arm for the Town. Most of these cars are old M.G.’s, Triumph’s, Porsche’s, Austin Healy’s Mercedes Bends, Cars that dominated the Grand prix circuit in the 40’s, 50’s and 60’s. If you talk to these guys, every one has a story. You don’t have to be Super Rich to own one of these’s cars, just very lucky. This Island will come out in droves to see these wonderful classic cars. The use of the Airport is another issue, I’ll defer to you on that. But don’t miss the weekend Dave much fun. Ps. I don’t have a race car and am not a member of SVRA. Just a fan.

Hard to see how a flat,paved surface that routinely absorbs the impact of aircraft weighing upwards of 50k lbs or more will be damaged by some cars.The closure of the airport is another matter and needs serious discussion.

Dave, sorry here my friend, but you are sounding a bit like a naysayer on this one. Fearing the wealthy will stay on the south end as they are rich? Dave we aren’t actually a slum yet. I trust many would actually enjoy hobnobbing with the less fortunate of Amelia Island, possibly even venture to to scary uncharted places such as the Palace Saloon or if more adventuress the Hammerhead. I also have to agree with Andy, which is a rare occurrence, but he is right, The runway should hold up fine since it was actually engineered to have the impact of planes bouncing on it every few hours. All kidding aside, anything we can do to promote tourism and increase both business and awareness to the Island is a good thing, even if it means letting those wealthy folk mingle with us. I don’t have a dog in this race, but if the Airport folks can work this out and it becomes another ” event ” what is there to loose?