On May 13, 2015, CSX finally signed an agreement allowing the city to proceed to build a sidewalk between the railroad tracks and buildings east of the tracks.  Despite the December 2014 settlement of a legal dispute over private property rights and a verbal okay from the railroad, the city had been unsuccessful until now in procuring a written agreement from CSX allowing them to connect the publicly christened “sidewalk to nowhere” in front of the Salty Pelican restaurant to Centre Street.

The absence of a public sidewalk has created safety issues for both pedestrians and trains, and even brought in federal authorities to investigate ADA concerns.

City Manager Joe Gerrity said, “I believe the work will start next week. I don’t know the cost of the project but it is included in the 14-15 budget.”

The full text of the final exchange between the city and CSX appears below. 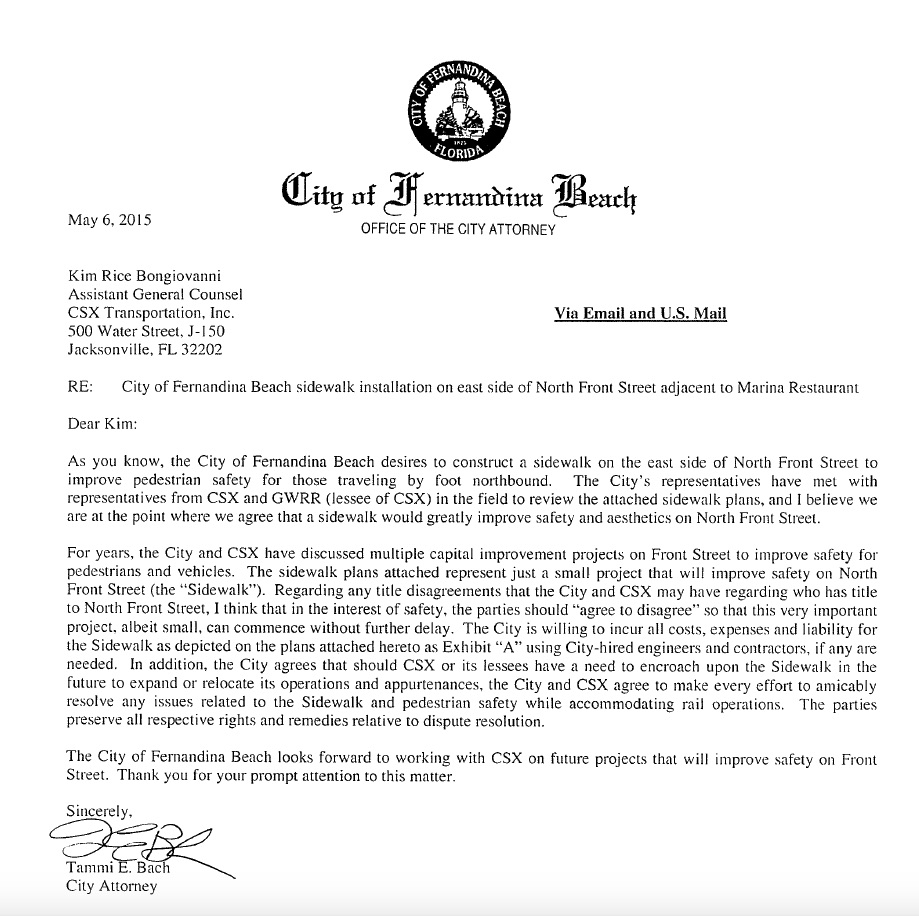 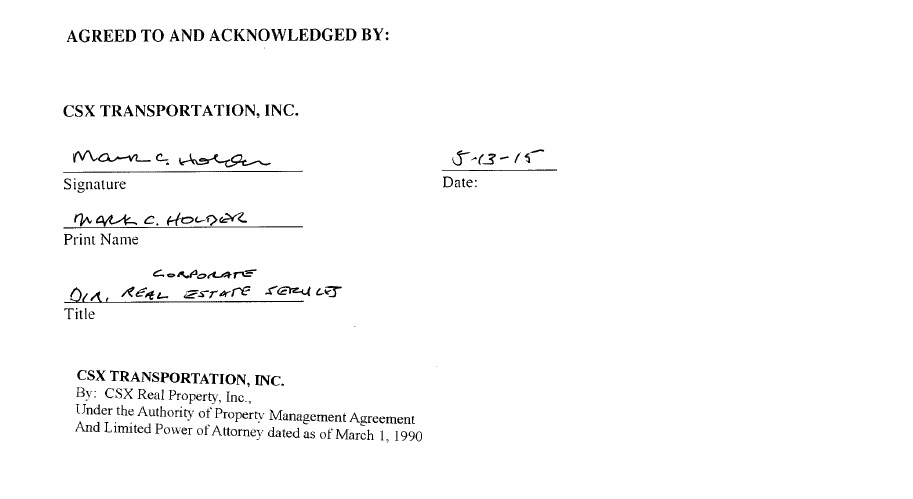 Thanks, Joe Gerrity! Glad to see this project moving forward.

Nice to see this issue finally resolved. This has been a Safety Issue and an Eye Sore. Thanks for the follow up. Joe, hang in there.

Miraculously, when Gerrity’s been put on notice. Coincidence?

Only in Fernandina do our public servants get chastised for doing their jobs. If it was easy we could give it to the private sector.

Efficiency and expediency are as important as the end result. Nothing like the threat of a firing to light a fire.

The final hold up was CSX. Just because you see a conspiracy in every move doesn’t mean there is one. To suggest that Joe responded because of a threat ignores the facts.

This has been a very long time in coming . . . I thank the citizens who first complained and proposed the change, as well as those who have continued to bring this issue up at Commission meetings. If not for them, I truly believe that the sidewalk would never have been a reality.

Thanks also to Tony Crawford!

Mr Gerrity was asked to get this done 2 years ago! While the courts took a while, that part was settled last December….where has Mr Gerrity been since then? It’s funny how when your job is on the line, you stop the slow thinking and get moving! My thanks go to those private citizens who fought and never gave up, even when told to keep away from talking to CSX!! Thank you also to Johnny Miller who became a strong and persistent advocate for this sidewalk! The “Sidewalk to Nowhere” now leads everyone to the Salty Pelican:) Let the parade begin!!

Sorry City Manager Gerrity, since this took longer than people wanted, and you told them to be patient when they didn’t want to, you deserve no credit. We’ll even throw in a little conspiracy theory that you were holding this up on purpose for free! Seems like our little slice of heaven can’t happy even when they get what they want.

The bottom line…this went on for months even after the court case was settled. Mr Gerrity is called on the mat for lack of “getting things done” now, it’s done! No conspiracy theory, just facts! Onward to the Pelican safe and sound:)

Mr.Gerrity and Ms.Bach:
Thanks for your persistence in dealing with not one but two, railroad bureaucracies.

It’s a miracle! Finally after being called out, things are moving just before the next meeting!! But the ethics or lack there of have not been addressed!

It’s interesting how the post regime supporters are the loudest on the Internet, but the citizens clearly chose on Election Day!

“I believe the project will start next week. I don’t know the cost…” After all the agita, he still doesn’t have a schedule and budget? That’s where most “projects” start.

Since the city maintenance department is doing the work I’m not too worried about a budget. It’s the kind of work they do all the time.

Mike, politics aside, this is a good thing to have finally come to a conclusion. Everyone can decide for themselves about the political end of it. It’s going to get done and we should all be happy for that. The cost question and the fact it is kind of the work the City does, may not be accurate. It is my guess, and only a guess, that much of this work will be sub-contracted out. It is not just putting a sidewalk down. The old sidewalk/ concrete has to be ripped up, the area has to be graded to specks, a barrier has to be placed along the tracks, new concrete has to be poured, and landscaping has to be done. I am sure the City will oversee this whole operation, but it is my thought much of it will be subbed out. This will all cost money, taxpayer money. It’s a good thing and it is going to good use, but the fact is the project will still have a price tag to it. Even if the City workers do it there will be a cost for material as well as labor. Remember the deck by the welcome center is running about $47,000 and that is just a deck. The City has carpenters that could have constructed it, but we subbed it out. Hopefully the reason was that in the long run it was more cost effective to hire a contractor to do it rather than do it in house. I going to stick my neck out and say this sidewalk will run $100,000 or more. Just a guess mind you. If anyone has any cost information they would like to share I think we all would like to hear it. This will be money well spent at the end of the day.