At the March 17, 2015 Fernandina Beach City Commission (FBCC) meeting, Vice Mayor Johnny Miller led the charge in support of Florida Senate Bill 966 and House Bill 661, which would allow certain municipalities to establish by Ordinance a pilot program to regulate or ban disposable plastic bags, so long as the Ordinance does not include any new taxes or fees on the use or distribution of disposable plastic bags. 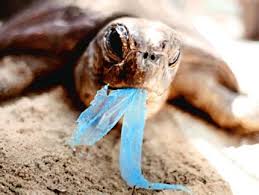 Miller said he first learned of this movement over a year ago. He said that Facebook discussions over the topic have led to the creation of a group called Bag The Bag Fernandina. Miller went on at some length over the problems of disposing of plastic bags, which are not readily accepted by recycling centers and which present hazards to marine life and boaters when they enter waterways.

According to Miller, some have joked that New York has made the plastic bag their state flower because they spend so much time and effort removing them from trees.

He said that 80 percent of the problems are inadvertently caused when these bags fly out of cars or garbage containers. The proposed bills will not eliminate the bags from use, but will hopefully cut down on their use.

Miller said that the point of supporting this bill is to tell the Legislature that Fernandina Beach would like to be part of the pilot project to come up with ideas for reducing the use of plastic bags in retail stores.

Three people from the audience had signed up to speak in support of the resolution, but only Julie Ferreira came to the podium. She said that because Fernandina Beach is located on an island, the plastic bag problems for boaters and aquatic life are even more serious here. She updated commissioners on local efforts, including the production of cloth bags, which she hopes local merchants will agree to sell in support of the movement. The bags will sell for $5.

The FBCC unanimously adopted Resolution 2015-56 in support of the bills currently pending before the Legislature. Miller said that he would take the resolution to Tallahassee personally on Tuesday, March 24, and that on Wednesday March 25, he would be on the House floor in support of the measure. Miller received a round of applause from the audience members and thanks from commissioners for leading this effort.

Commissioner Miller, This is great news, There are three areas in our oceans, each the size of Texas of floating plastic trash. This is a first step, every one can help. Thank You.

Thank you, Johnny. Plastic shopping bags are turning the ocean into a giant dumpster.

Awesome!!! Johnny Miller will have applause tomorrow also when he talks to the
House re: House Bill 661. I am so proud of his efforts!

The plastic bag industry has a strong lobby in Tallahassee. It is now up to ALL OF US to get Tallahassee to move on this. Please send Aaron Bean (bean.aaron@flsenate.gov) an email and ask him to co-sponsor SB 966 and also ask Janet Adkins (janet.adkins@myfloridahouse.gov) to co-sponsor HB 661. Fernandina wants to be a leader in the state and be part of this pilot program. We need their help.

Julie, I will e-mail Bean and Adkins in support of these bills. I do hope they can find it in their Partisan Hearts to give this issue more support than they have to our issues with Nassau Terminal, Kinder Morgan, OHPA Commissioners and our Port of Fernandina. Ps You must be so proud of making Dave Scotts hit list on his blog. I aspire to one day to be called a “Gadfly” by old Dave, whatever the hell that is.

My observation is clearly not consistent with others. In my view this is another freedom, a personal choice that the government is deciding that I am not capable of making. I have no issues with recycling and make it a practice to do so. I would not want to make a two week grocery haul and have to deal with those silly canvas, or whatever they are, bags. If this goes the next thing you’ll know is that they’re gonna want to climb into your wallet to tax you got beach sand.