Another waterfront park plan on the horizon?

At the October 15, 2013 Fernandina Beach City Commission meeting, local architect Randy Rice unveiled the latest in what appears to be a regular cycle of rethinking, redesigning and reprioritizing plans for an Amelia Riverfront park at the foot of Centre Street.

Local business owner and Historic District resident George Sheffield took the unusual step of introducing Rice and his plan to the FBCC.  Sheffield read the FBCC a short “once upon a time” story that he had written to underline the hopes and dreams of local residents to see a waterfront park built in their lifetime.  He said that dreams determine our destiny and that he is one of many who do not want the vision of a waterfront park to die.

Using a slide presentation, project proponent Randy Rice led the FBCC through a 20-minute explanation of the first phase of his plan, which he claimed, could be built for around a million dollars.  One of the many differences between this plan and previous plans is that it would be privately funded.  Rice’s plan appeared to have the backing of a group called The Committee for the Amelia River Waterfront Park, which is in the process of incorporating as a 501(c)(3) non-profit organization.  He did not address current membership of the organization.

He likened his group’s strategy to that of a barn raising, suggesting that perhaps the community could come together to do a “park raising.”

Basing his Modified Phase One Plan (MOD1) on the 2012 Waterfront Park Plan, he would include the city waterfront lots A and B, but add a “Lot E:” the city-owned park/parking lot on the corner of Ash and 2nd Streets west of City Hall.  The objectives of MOD1 are to create functional venues, parking neutral (no net loss of existing parking spaces), privately funded, and to place park areas near people.

The plan calls for creating a 12’x30’ stage on the north side of the existing marina welcome center with viewing seating for 400.  The plan incorporates a misting fountain to create a cool zone and allows for shaded space in the viewing area.  The area also features an Eight Flags “Patrons” Plaza, a festival plaza and a river view corridor. It does not call for moving the Veterans Memorial.

Once the Committee is designated a 501(c)(3) organization, Rice stated that funds would be raised via a community campaign that would accept donations and offer naming rights and engraved pavers as well as matching grants from the Florida Inland Navigation District (FIND) and the Saint Johns River Water Management District.

Rice said that MOD1 condenses the 2012 plan into a smaller project that is attainable and focuses park space and funding where the highest concentration of use would naturally occur.  It also keeps Front Street and the rail configuration as they currently exist. 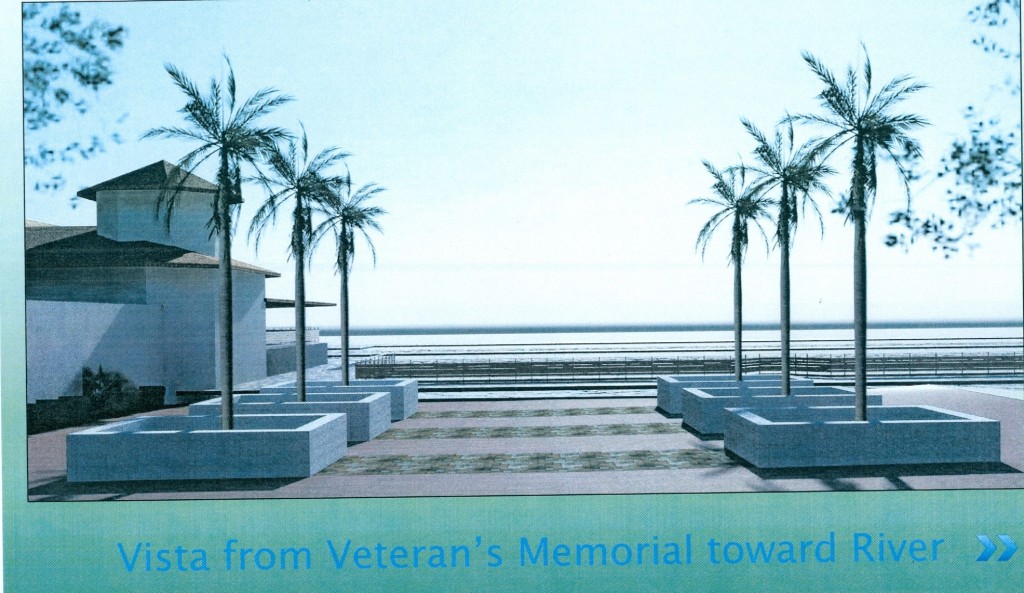 Rice presented a preliminary budget breaking down costs by lot, with A and B roughly equal at $400K each and E costing around $220K.  These prices include demolition, new materials and landscaping as well as an assumption that city workers would assist on certain aspects of the project.  The timetable targets scheduled completion for spring 2015 assuming that work begins this fall.

This plan would require, among other things, that the city commission:

}  Authorize the use of the city lands in question to be used for the purposes proposed,

}  Facilitate a streamlined administrative path through the appointment of a City Park Liaison,

}  Pay the Permit fees for the park,

}  Provide assistance with construction tasks where City Staff has expertise.

Following his presentation, commissioners raised some questions.  Commissioner Arlene Filkoff asked Rice how the plan addresses infrastructure requirements.  Rice responded that by not moving Front Street and by eliminating the hard surface parking areas, there would be natural retention to take care of storm runoff.  He said that other actions might be required but that they could be financed through matching grants.  Filkoff asked if the city would still own and be required to maintain the park.  Rice responded affirmatively, adding that he hoped the park would be self-sustaining through revenues generated by park events.  Filkoff also wanted to know how work performed by the railroad might impact plans or operations of the park.  Rice agreed to bring up this topic in discussions with the Saint Johns Water Management District.

Vice Mayor Charlie Corbett asked if the work could be done in stages.  Rice replied that retention, parking and features should be built together.  Otherwise it would be like baking all the individual parts of an apple pie and assembling the pie as a final step.

Commissioner Ed Boner said that he would also want to hear from Deputy City Manager Marshall McCrary on the city’s assessment of the plan, features and costs.  Filkoff said that she would like to see Rice meet with the City Manager, Marshall McCrary, Community Development Director Adrienne Burke and Streets Manager Rex Lester and then report back to the City Commission.  Rice agreed to do so and concluded his presentation as a receptive audience applauded.