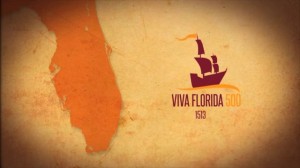 Performance of Viva Fernandina, a historical play written by Jennifer  Harrison, and directed by Amelia Hart, in which a cast of colorful historical characters give an overview of the history of Old Town Fernandina, the last town in the Western hemisphere whose streets were laid out by the Spanish.

Performance by Fuego Flamenco. Led by Principal Instructor and Cofounder   Naomi Vail, “Fuego Flamenco” has established a reputation as the best and most professional Spanish Dance Troupe in all of Jacksonville, St. Augustine and the surrounding area.

Spanish Colonial Foodways Presentation by Cathy Parker, of the University of West Florida. Cathy presents examples of foods the colonial settlers craved, compared to what they actually had to eat (if they were lucky!). She also recreates the standard European military ration, which, with few minor changes, would be readily recognized as “home cooking” by any soldier in the 15th – 19th centuries. Handouts with recipes will be provided, and questions are encouraged.

Middle Passage Ceremony to honor the countless Africans who lost their lives being brought across the Atlantic to be sold into slavery.  An estimated 15% of those who were forced to make the journey to the New World died in the crossing. The ceremony will include the Peck Community Ensemble, along with Queen Quet of the Gullah Geechee Nation. Neil Frink and Gwen Triay, both of whom have long standing ties to our community

A Taste of Spain – Wine Tasting with Spanish appetizers, along with an encore performance by Fuego Flamenco.  Tickets must be purchased in advance, and you must be over the age of 21 to attend. Tickets will be on sale at the Amelia Island Museum of History, 233 S. 3rd St.

Parking will be available at the Dee Dee Bartels Public Boat Ramp on 14th Street, with a shuttle to Old Town provided by Amelia Island Trolleys.

Saturday the 28th will be a day full of fun, family friendly activities held at the Plaza San Carlos in Old Town. The event will be held from 10 am to 3 pm, and will include a representation of a Spanish Peonia (a typical plot of land in accordance with the law of the Indes), complete with live animals. Professor Gordon Rakita from UNF will provide a demonstration of Ground Penetrating Radar, and how it teaches us about the area’s past. There will be food vendors selling Spanish cuisine, and live music, along with docent-led Town Gate Tours, which explore the fascinating history of Old Town Fernandina the last town in the Western hemisphere whose streets were laid out by the Spanish, running from 10am-2pm.

Fernandina’s celebration of Viva Florida 500 will continue in October, as the Amelia Island Museum of History presents Talking Dirt: The Many Voices of Florida Archaeology – a series of three, one hour lectures on archaeology and Florida history.The series kicks off on October 12th, with a presentation entitled Exploring Ancient Florida by Dr. Rachel Wentz, followed on October 19th with a lecture on Native American Medicinal Plants by Dr. Michelle Williams, and concluding with Sarah Miller presenting Grit Tempered II: Famous Women in Florida Archaeology, on October 26th. The series will be held at the Peck Center, in the Willie Mae Ashley Auditorium. More information will follow!