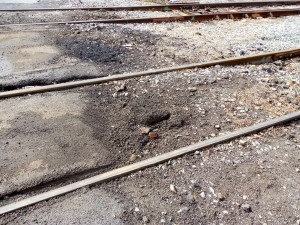 Drivers and pedestrians may soon have an easier ride or walk across the railroad tracks at Ash Street to the Amelia River waterfront in downtown Fernandina Beach.

Despite rainy weather, repair crews from CSX/First Coast Railroad appeared to have been working to patch a badly eroded rail crossing at Ash and Front Streets this week.  According to Rex Lester, City of Fernandina Beach Maintenance Manager, “First Coast [Railroad] had a broken rail that they had to replace.”  The city is not involved in the project and is not financing the work.

While many people may have thought that this project was the beginning of a larger project to upgrade and repair the downtown Fernandina Beach railroad/waterfront appearance, the current work appears to be minimal repair work to address the most dilapidated rail crossing in the downtown area.

The issue of creating a “Quiet Zone” to address concerns of the local lodging establishments and patrons while increasing safety at the crossings was part of the Forward Fernandina plan abandoned earlier this year by the Fernandina Beach City Commission.  There is no public indication that the city is actively pursuing that project at this time.

Water continues to pool in the track areas fronting buildings to the east of the tracks, due to drainage and continuing infrastructure problems in the area.

The Rail crossing from the information I have found out from First Coast is scheduled to be completely renewed under next years capital funding. I wouldn’t hold my breath, as capital funding is an iffy issue at best these days, but it is at least on the table.
The “quite zone” is another issue. First off, I wonder if the local lodging establishments noticed that they were building next to an active rail road. If you build next to a dump, expect to smell the results. The quite zone is a rather slippery slope for the City to pursue. Establishing a quite zone basically takes away the responsibility of the engineer to blow his horn at crossings, which is a federal law. Now, should some person, for whatever reason, get run over, who is liable? Not the railroad. The City has taken that reasonability away from First Coast. Some may say that there will be crossing gates, true, but there are many folks who had wished they respected those gates are aren’t around to tell you so. In my opinion we are just once again putting the City at risk. Why would we do this to appease the hotel owners who built their business next to a rail track? Maybe they should have looked first.

Tony,
Some valid points but to qualify for a quiet zone, the guards and other warning signals must be in place. It is not just for the hotel, but would serve to reduce the noise footprint in the downtown area and making residential housing development more attractive. And of course such development means an increased tax base as well as more people living in the downtown area and the related commerce there.
I was just in San Diego and staying at a hotel in the Gaslamp historic district. This is a prime hotel/residential area of downtown San Diego and I noticed they have a “quiet zone” in the area that is serviced by rail trolleys, commuter and freight heavy rail traffic. Not hearing blowing horns was a pleasant relief. Establishing a quiet zone is an extensive process but it is one that I think would be benefical for development in the downtown area.

Dave I agree that a quiet zone would be good for potential development of the area. My gut tells me this was being done more to appease the hotel than for future City development. Can anyone tell me when the last time the City has actually had an idea, voted on it, permitted it, funded it and above all finished it. We seem to start a lot of stuff but never actually get much done.

My question in all of this is simple. What is the liability issue should, after all the safety guards are put into place, the train run over someone. It’s that simple. I will tell you the Rail Company will not be liable as they were granted permission to forgo a Federal Law which requires the Engineer driving the train to blow the horn. My hope is that, should this come to pass, the City has done its homework and has checked with others who have instituted a quite zone on what the outcome was due to an accident. It’s the old risk and reward factor.