Dorothy Duke, and others paved the way for women to teach equitation, and train horses.  Babbett Spencer Santarelli Williams (“Babs”) overcame many obstacles and biases to be recognized as one of the best, and was featured in Helen Crabtree’s book about saddle seat equitation.

Perhaps her biggest accomplishment came in 1971 with the syndication of the renowned World’s Champion Five-Gaited Stallion Chief of Greystone to New Jersey. This gave owners in the northeast an opportunity to breed their mares without shipping them south. Judy Brown sent her mare to Chief his first season – resulting in Champion Five-Gaited horse, Attaché!
Another benchmark in her career was “Bluefield’s,” a horse farm she developed for the Richardson family. This was an exciting period in her career, with horses such as Wings of Fortune, Sparkling Choice, Denmark’s Gay Lady, and Midnight Orbit. The equitation program flourished with the Ronco Sisters, Donna Pirro, and her daughters, Carol and Susan Spencer. 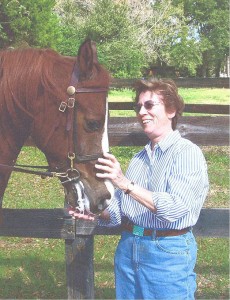 Babs Spencer Santarelli was a well-known fixture in the horse show world from the 50’s to the 80’s. She fell in love with the saddle horse at the age of nine when she took her first riding lessons at Josephine Abercrombie’s renowned Pin Oak Stables in Houston, Texas. Within a few weeks this horse-crazy girl formed a lifetime attachment to the American Saddlebred. Moving with her family from Texas to Colorado, Florida, New York, and Tennessee, Babs rode and took lessons whenever she could.

At nineteen she married Gordon Spencer, they settled in Clarks Summit, Pa. and bought her first horse Cherry Chic from Walter Siefert. During those weekend horse shows Babs and Isabel Robson formed a life-long friendship.

Her career began in the 1950’s when the family moved to Princeton, New Jersey and established Glenburn Valley Farm. During that time she showed great horses like GloriaSea, Flare Up, Miss Brentwood, and others to numerouswins at such shows such as Devon, Madison Square Garden and Eastern States.

In the 60’s, she began to teach equitation seriously. She
traveled to Joe Vanorio’s farm in Harrison, New York to learn
his methods. She also worked with Sullivan Davis, one of the
first African-American trainers at that time. Soon her twenty stall
barn was full, including young riders Carol Hillenbrand,
Candi Covino Aversanti, and Mary Helen Richardson as well
as her own daughters, Ellen, Carol and Sue.

Men had dominated the profession until Helen Crabtree.
She also trained Carol Hillenbrand, Judy Kingsford, Dr
Helen Neave and others for the amateur and open classes.
Babs enjoys a special bond with Carol Hillenbrand who
showed with her from the time Carol was twelve until Babs
retired.

The Moros family is also a treasured part of her history. Paul
and Delores brought their three daughters, Tracy, Shaun,
and Pam, to the barn to inquire about riding lessons. Soon
Paul asked if she would train “a few horses they owned.” She
still remembers Mike Barlow, unloading the “few horses,’
which turned out to be ten Arabians! Shaun is now married
to Jimmy Stachowski and is heavily involved in the horse
industry with both Arabs and Saddlebreds.

In the late eighties, Babs decided that because of physical problems, it was time to retire from the world she loved while she was still at the top of her game. She said, “In my lifetime I had some great horses, some good horses, and a few just plain horses. I am proud of the fact that very few of my boarders chose to leave the barn. Over the years we won our share of championships and blue ribbons, but what I cherish most are the people that came into my life, and the lasting relationships that were formed
because of the horses.”

Now 85, Babs has lived on Amelia Island, Florida with her husband, Aubrey Williams, where she enjoys golf and writing. Her biggest pleasure is their extended family and watching her daughter, Ellen Spencer Susman, return to the show ring and carry on her legacy into the 21st century.