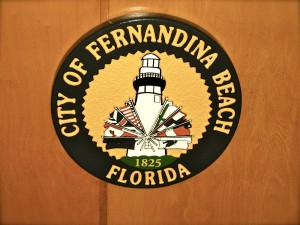 After a half hour of discussion during the August 12, 2013 Budget Workshop over the wisdom of continuing to pay Nassau County $51,000 annually for library operations in Fernandina Beach, the Fernandina Beach City Commission (FBCC) swallowed hard and punted.  They agreed to abide by the decision to send the money to the county for the current fiscal year, as they voted to do in adopting the budget last September.  But they added future library funding to a list of important topics that need further discussion with the Nassau County Board of County Commissioners, including beach renourishment and island-wide fire rescue service.

For most of the meeting Commissioner Pat Gass held to the position she articulated at the earlier budget workshop:  the Nassau County Library is funded by the county, and it is unfair to Fernandina Beach taxpayers to contribute to operations when no other municipality in the county does so.

Commissioner Arlene Filkoff suggested that both Hilliard and Callahan are much smaller than Fernandina Beach.  They do contribute money to their local “Friends of the Library” groups instead of sending money to the county.  She reminded commissioners that three of them—Pelican, Corbett and herself—had approved a budget for the current year that included this transfer to the county.  She said that changing a longstanding policy without first talking with the county seemed like a questionable move.  She expressed fears that Fernandina Beach residents would suffer from such a move.  “It is unconscionable,” she said, “to do this [cease making an annual payment] without sitting down with Nassau County.”  The city should plan a joint session with the county after both bodies are through their budget discussions, she said.

Mayor Sarah Pelican reminded commissioners that the discussion regarding the city’s annual payment to the county for library service has gone on for decades.   “We didn’t just pull this out of our hat,” she said.  “No one has had the courage to say we need to take this on and deal with it. “  She said in effect , “Landlords [the city] are paying tenants to be in their building [the city-owned library facility].  We are being demonized for bringing this up. We need a discussion.”

The Mayor reminded Filkoff that Gerrity’s efforts to bring up the library issue and other issues had been rebuffed by the county.  Filkoff said, “Maybe the time has come for the commissions, not the city manager and the county administrator, to sit down and talk.  If it’s a question of just saving money, we commissioners can give up our salaries and save $60,000 right there.”  While the audience chuckled at this suggestion, other commissioners did not seem as amused.

Commissioner Gass chimed in saying that the citizens can donate more money if they choose, but she believes that the role of government is to pay for things like roads, sewers, water and some recreation.  “If the people want it [additional library funding], then the people will give it,” she said.  She encouraged people in the community to “stop with the scare tactics about moving the library and get realistic.”  If the county doesn’t have the money, she asked “Where are they gonna move it and put it? Nobody but us would give them [a building] rent free and $51,000.” She claimed that Nassau County is aware that the city desires to pull this operational funding and is okay the city’s ending library payments. 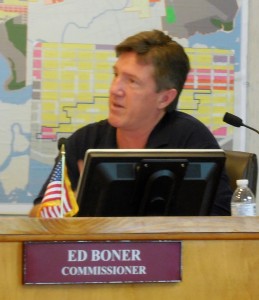 Commissioner Boner echoed some of Filkoff’s concerns, saying that it is all about relationships when it comes to matters like this.  He also seemed to feel that timing was an important aspect.  He expressed a willingness to bring this up with the county.  “When you change a term of an agreement,” he said, “the whole agreement is open for change.  If it were up to me I would rather wait to have this discussion until after the library expansion is completed.”

Vice Mayor Corbett told commissioners that the county library budget is $1.2M.  They just add the $51,000 to their general budget, he said. “Why do they need this money?” he asked.  “Let them show us they need it.”  He suggested that the quickest way to begin a conversation with the county on the matter is to stop sending the payment.

Filkoff suggested that the commission could contribute the money to the Fernandina branch of Friends of the Library, in lieu of sending it to the county, to make sure that the money is used locally.  She asked, “Is this the time to thumb our noses at the County?”  Corbett asked, “Who’s arguing?  We’re both saying the same thing.”  Mayor Pelican added that she is tired of kicking this can down the road.

Mayor Pelican turned to City Manager Joe Gerrity and asked him to set up a meeting with the county to discuss the library, island-wide fire and rescue, and beach renourishment.  Gerrity expressed concerns about the benefit of such a meeting.  “I don’t know that ten elected officials sitting at a table will accomplish anything,” he said, adding, “I don’t even know if the county would participate. We need to have something more definite than just speaking about these issues.”

Filkoff suggested that perhaps the invitation needed to come from Mayor Pelican, as opposed to city manager Gerrity, and go to County Commission Chair Danny Leeper, as opposed to county manager Ted Selby.  Gerrity agreed to draft the letter.  But he asked for direction on the current year.

At that point, Commissioner Pat Gass said, “We need to honor our commitment.  If we said we would pay them the money for this year, we are honor bound to take care of it.  We just aren’t going to do it again next year.”

Gerrity agreed to bring to a September meeting a resolution to the FBCC authorizing payment for the current fiscal year.  Mayor Pelican said to Gerrity, “You have consensus.”