The Fernandina Beach City Commission (FBCC) held a special meeting on July 30, 2013, to formally set a tentative millage rate for FY 2013-14.  While the FBCC finally agreed upon a tentative operating millage rate of 6.400, passage was neither quick nor easily obtained.  Under Florida’s Truth In Millage Act (TRIM), local governments are required to follow basic rules and a timetable for setting forth proposed millage rates for the next fiscal year, which begins October 1.

Vice Mayor/Commissioner Charlie Corbett absented himself from this meeting because of his vacation schedule.  This left the remaining four commissioners to grapple with both operational issues inherent in cutting staff and services and the political fallout from setting tax rates.  The FBCC deferred some decisions on funding items such as Shrimp Fest clean up and grants to non-profit agencies until his return, the date of which was not announced.

Under state rules, the local government may set a tentative operating millage rate equal to the rollback rate with a majority vote.  However, to set a higher rate there must be approval by a super majority, or in the city’s case, 4 affirmative votes.  Corbett’s absence complicated the vote when Mayor Sarah Pelican voted against the rate proposed by City Manager Joe Gerrity:  6.4657. 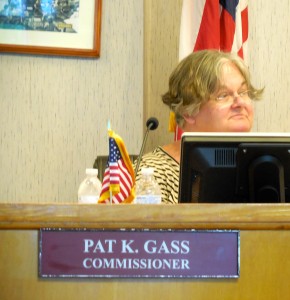 Even though both Gerrity and the other commissioners explained that such a rate was only preliminary and could be reduced during future meetings, Pelican remained adamantly opposed to the rate hike.  She said, “I feel we should stick with the adjusted rollback rate [6.2844].  Staff has done a good job of putting the budget together.”  Commissioner Pat Gass added that she liked the non-adjusted rollback rate of 6.1800.  Gass indicated that she had many questions about the budget and proceeded down her list.  She eventually decided that it might be best, since she had 8 pages of questions, to set up a meeting with Gerrity outside this special commission meeting to get her answers.

Commissioners Ed Boner and Arlene Filkoff did not feel comfortable setting the millage at the rollback rate to begin the budget process.Gerrity said that he would work with whatever whatever millage rate the FBCC would set.  He had requested the higher rate because of current uncertainty over employee health insurance premiums for 2014.

Both Gerrity and City Comptroller Patti Clifford reminded the commissioners that the tentative millage rate for FY2013-14 needed to be reported to the state by the end of the week to avoid violating the TRIM Act and forfeiture of state funding.  Since Pelican was the only hold out on the vote, commissioners asked her what she would accept.  After what appeared to be a few seconds of painful thought, Pelican said that she would vote for a tentative millage rate of 6.400.  The motion to approve was quickly made and seconded and passed with 4 votes.

Pelican gave no explanation for finding a 6.400 millage rate more acceptable than the 6.4657 rate proposed by the city manager, in light of her earlier statement that she felt the city should stick with the adjusted rollback rate.

Commissioner Filkoff expressed serious reservations about the city’s ability to continue to provide the level of service that citizens expect with a budget process that relies on annual staffing cuts and increased millage.  She asked Gerrity about the effects of such a strategy on the city work force.  He replied, “People [city staff] have been pushed to the max.”  Filkoff said, “The system cannot be sustained this way.  We need to look at new revenues.  How much longer can our staff keep up when we are offering no raises and cutting positions?  This is the last year the city can stand raising millage and cutting positions.  Converting full-time slots to part-time is not a long term solution, because the part-timers will leave for full time jobs with benefits.”  Gerrity added that the proposed budget addressed long-term debt problems at the city golf course and the marina.  “But,” he added, “I agree with Commissioner Filkoff that we can’t cut any more [positions].”

City Manager Gerrity informed the commission and the public that the month of August has been set aside for budget workshops.  He asked the commissioners to provide him with input on organizing any meetings that they wished to hold, along with topics for which they need additional information or discussion.

Check the calendar on the city website www.fbfl.us for dates and times of budget workshops and meetings.