Talking turkey about CRAs in Florida and Fernandina Beach

After about 2.5 hours of discussion, the consensus seemed to be that there are two essential elements for a successful Community Redevelopment Area (CRA):  focus and leadership.  Focus is clearly articulated through a well thought out plan; leadership comes from the CRA Agency, which in the case of Fernandina Beach, is the Fernandina Beach City Commission (FBCC), which appointed itself to serve in that capacity when the CRA was created in 2005.

The three actions up for FBCC action at its next meeting include:  resetting the base year for the CRA from 2005 to the current year; extending the life of the CRA by up to 20 more years; and amending the Charter to remove the language that limits CRAs to no more than 2% of the taxable land value of the city.  The first two recommendations were put forward by the CRAAB; the Charter amendment grew out of discussion during the workshop and seemed to be championed by City Commissioner Pat Gass.  There is no limitation on CRA size by Florida statute.

What is a Community Redevelopment Area (CRA)?

The Fernandina Beach CRA was authorized in 2005 and is situated along the Amelia River, generally south of the Port of Fernandina to Rayonier property and west of the railroad track with some parcels east of the tracks. Half of the property is publicly owned.  Consult the city’s website for a map of the specific area and the CRA plan.

General points about CRAs around Florida

Westmoreland spent much of her talk in lecture mode, entertaining questions as they arose.  Some of the areas she touched on included: 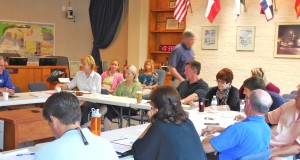 Westmoreland said that focus is one of the hardest concepts to understand and communicate.  Many communities want to start CRAs in underserved areas of the city, which can be too big a chunk to address initially.  It is better, she believed, to focus on one smaller area at a time, find a partner and manage the project.  Once CRAs start developing, money begins flowing into the TIF, or Tax Increment Financing fund, for wider use throughout the area.  “Don’t start in an area where challenges overwhelm you,” she said.  “Pick an area that needs a jump start.  Remember also that the easiest thing is not always the best thing.”

She emphasized the importance of sticking to a plan, and the need to sell the plan from a positive perspective.  She acknowledged that there will always be those people who want to build absolutely nothing anywhere, but someone, in this case the Fernandina Beach City Commission acting as the CRA governing board, needs to pull the redevelopment trigger and overcome skepticism by “being unabashedly proud of everything you’ve done.”

Maintaining an identity for the community via the CRA plan is key, she maintained.  This can be showcased through developing good partnerships with developers, business owners and people who want to build in the CRA according to the rules that the city has set through the CRA plan, the Land Development Code and the design guidelines.  “If you are not changing,” she said, “you are not keeping up.”

Because the results of CRA plans are often not seen for many years after the district is implemented, it is not unusual to see nothing change physically for 15 years, she said.  CRAs have a choice to attack development on a pay-as-you-go basis, or to leverage money via bonding to allow actions to occur sooner.  She did not endorse one means over another.  In either case, money must come into the TIF for any progress to be made.

[Note that money that that comprises the TIF fund comes from rising property values.  The base year level ad valorem taxes remain in the general fund.  The incremental increase, due to property improvements, flow into the TIF fund.]

In response to a question regarding how to address those citizens who have concerns that money is being diverted from general revenues to benefit one specific area of the city, Westmoreland replied that the CRA governing board must be able to make the case that redevelopment benefits everyone by expanding the tax base, improving infrastructure and in Fernandina Beach’s case, attracting more tourism.  Westmoreland cited the example of Panama City Beach, which by investing $30K in their CRA produced a $100M project that is extremely successful.

Commissioner Pat Gass asked, “What is the vision for the waterfront?”  She said she has no problem with CRAs, but said that local citizens are still “in a mourning phase for the loss of the shrimping industry.  They are not through mourning, so they are not ready to move on.”  Westmoreland opined that unless the community finds something to replace the shrimping industry, the community would never get through the mourning phase.  Finding the next thing and selling it to the community through positive communication, transparency and smart use of the media should be a priority.

Responding to a comment from Commissioner Arlene Filkoff, Kelly Gibson reminded the participants that the CRA strategic plan brings together information from all the visioning exercises that have been conducted in the city to date.  Debra Stephenson suggested that perhaps since the economy has changed dramatically since the last visioning exercise, there should be a new one.  Commissioner Gass seemed supportive of this suggestion.

The discussion enlarged to include problems with the 8th Street corridor, the possibility of expanding the CRA or adding another district that might include an interlocal agreement with the county and/or taking in the area west of 14th Street.  Commissioners were reminded that the City Charter limits the total of CRA area within the city to 2%.  Westmoreland attempted to rein in the discussion by reminding participants to keep the CRA focused according to the strategic plan and concentrate on identifying what needs to be done according to that plan.  “Keep it simple,” she advised.  “Don’t worry about how; worry about what.”

Westmoreland advised the CRA governing board to identify a first step.  “Show citizens you have a plan,” she said.  “Give them something to be excited about.”  CRAAB Chair Zaffaroni said, “The city needs to show leadership before we bite off more than we can chew.”

Commissioner Gass said, “We can get excitement going by going to the 8th Street corridor [not currently in the CRA].”  Mayor Sarah Pelican chimed in with agreement, adding “It is almost a given that the waterfront will be taken care of.  But everyone wants that [8th Street] done.”

Participants engaged in discussion over whether the best course of action might be to expand the existing CRA boundary or establish another district that might include 8th Street and more.  The sticking point remained limitations imposed by Charter language.

Commissioner Gass suggested that the city needed a Charter amendment to remove the 2% limitation along with a good sales pitch to the public.  “Forward Fernandina was not a bad thing,” she said, “but it wasn’t sold properly.  We don’t want to make that mistake again.”

Mayor Pelican suggested that the city needs to get the message out with a great presentation on the front page of the News Leader.  CRAAB Chair Zaffaroni suggested positive interviews with the Fernandina Observer and the News Leader.  Gass said that it is also important for the commissioners to talk up the CRA with their friends, suggesting that one-on-one communications are the best and that commissioners need to roll up their sleeves and get their hands dirty.

Zaffaroni suggested that the CRA participants need to do for the CRA what Steve Rieck does for the county by selling the positive points to potential developers.  Commissioner Ed Boner said that the commission needs to paint a picture of what the city wants to end up with.  Mayor Pelican said that the city can’t be on the defensive.  “We moved here because something clicked,” she said.  “If we can’t sell this plan, who can?”

CRAAB member Andy Curtin brought the group back to the two CRAAB recommendations awaiting action by the city commission:  resetting the base year and extending the life of the CRA to 40 years.  He said those were the only two recommendations before the commission from the CRAAB and that he still supports them.  Commissioner Gass added that the commission could add others.  She suggested that at the upcoming Fernandina Beach City Commission (FBCC) meeting the FBCC address those two issues and a Charter amendment to remove the 2% cap limiting the amount of taxable value that can be tied up in a CRA.

CRAAB Chair Zaffaroni turned to Vice Mayor Charlie Corbett, the only city commissioner to have remained silent throughout the discussion, and asked for his input.  He replied, “I don’t have an opinion today.  You’ve already made your recommendations and I’ll consider them.”

Discussion participants expressed their appreciation to Westmoreland with a round of applause as the meeting adjourned at 11:30 a.m.  As its Executive Director, Carol Westmoreland has led the Florida Redevelopment Agency (FRA) under the auspices of the Florida League of Cities for 30 years.  According to their website:

Founded in 1974, FRA is a not-for-profit organization dedicated to assisting Florida professionals and volunteers in community revitalization efforts. With its mission of “transforming spaces, revitalizing places,” FRA is committed to providing a forum for its more than 300 members to share knowledge and common experiences regarding revitalization opportunities and issues throughout Florida. FRA encourages adoption of legal and financial tools and programs favorable to community growth and serves as a statewide clearinghouse for redevelopment information.

Several CRAAB members and city commissioners attended a FRA general training session on CRAs on June 12, 2013 in Jacksonville, where they also got to exchange ideas with counterparts in other northeast Florida communities grappling with the challenges of making their CRAs successful.  Westmoreland conducted that session as well, and agreed to spend a second day in the area to work directly with the Fernandina Beach community.

The FRA website contains extensive resources to assist individuals and communities in better understanding the nature of CRAs, their potential benefits, and how they work.  .  There are 215 CRAs in Florida, many with multiple districts.  Fernandina Beach has one of the smaller ones.