U S Navy Airship’s visit to Fernandina Beach Airport – Up, up, and away

Bob Kozakoff, Airport Superintendent, drove the Fernandina Beach City Manager, Joe Gerrity, and a small group of local dignitaries out to the only US Navy Airship for a briefing by Rear Admiral and Commander of the Fourth Fleet, Sinclair Harris.  As reported in a story last week, the Naval Air Warfare Center’s MZ-3A airship has been at our airport and in the Mayport area since March 22 for capabilities and flight demonstrations.

Harris explained that the airship would be conducting an exercise wherein it attempts to detect a camouflaged vessel in our area and may even be reporting on whale activity.  It has been acting as a flying lab and testing new procedures in an effort to “support Counter Transnational Organized Crime operations (detection) in the Caribbean Sea and Eastern Pacific Ocean. Harris a explained that this vessel is also part of a cost cutting effort due to budget cuts to use new technologies to meet operational needs in detecting illicit cargo being smuggled into the US every year.”

I was amazed to learn that we used some airships in Iraq and Afghanistan, much like drones.

As reported earlier, the blimp is 178 feet long, can 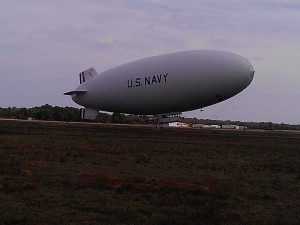 travel at 45 knots and has a ceiling of 9,500 feet.  As our local group watched from the sidelines, the Rear Admiral and selected passengers were loaded into the gondola and the ground crew manned two of the lines while a third ascended to the top front (crane) of the airship to detach the fixed connection to the ground. While the ground crews ran with the wind at the two lines (one on either side), it looked like a dance with the wind, until the conditions were right and the crew let the final lines go. 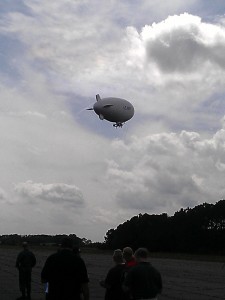 The majestic airship headed up, up and away to clapping from us civilians on the ground.

Editor’s Note: Gerry began free lance writing for fun and is the author of a published book (available on Amazon and at Books Plus) about funny real estate experiences.  Gerry is a longtime member of our local American Business Women’s Chapter, a volunteer cancer driver and church deacon who loves to read, travel and meet interesting people.