In an unusual move, the Fernandina Beach City Commission (FBCC) convened in workshop mode at 3:00 p.m. on Monday, February 11, 2013 to discuss the future of both projects and funds borrowed to complete them as identified in the strategic plan commonly known as Forward Fernandina.

Newly elected commissioner Ed Boner wanted commissioners to review the existing plan and come to consensus on which projects they support and which might take a back seat to other, more pressing city needs.

Newly elected commissioner Pat Gass saw things differently, however.  She believed that the money borrowed to support plan projects was “tainted” and needed to be returned, regardless of the merits of the individual projects to be funded.  About two dozen people attended the workshop that lasted an hour and a quarter.  While both Commissioners Ed Boner and Arlene Filkoff were prepared to take public input, the remaining three commissioners decided that they needed the time to discuss matters among themselves.  City Manager Joe Gerrity advised the public that they would be able to speak at future commission meetings when these items are placed on the agenda.

By the end of the meeting, there was no consensus on projects or priorities or on returning all or part of the borrowed money.

Commissioner Ed Boner took the lead in trying to focus the FBCC on which projects in the plan should continue to move forward, which should be postponed or funded through other means, and which new projects might be substituted in order to ease general fund budgeting for FY 2013-14.

Commissioner Arlene Filkoff used a slide presentation to explain to the commissioners how the existing strategic plan came about.  She recounted the various committees and public meetings from which the priorities were drawn and cited the countless hours of time invested by both citizens and city staff in putting together a strategic plan to broaden the tax base and protect the city’s current business environment, including tourism.  She reminded commissioners that increasingly, the city is composed of retirees and that broadening the tax base is the only way to avoid increasing the tax burden for retirees.  She said that potential developers are relying on the city’s following through with infrastructure improvements along Front Street and railroad improvements.  She also indicated that if the city can restart the Community Redevelopment Agency (CRA) on a better footing that would also go a long way toward helping to pay for waterfront improvements. 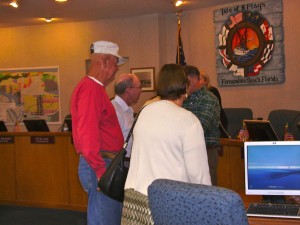 Filkoff said that she was the only commissioner currently serving who was part of putting that plan together.  Vice Mayor Charlie Corbett said in response, “You didn’t do so good in the last election, did you?”  [This was in reference to the mayoral straw vote in which Sarah Pelican defeated Filkoff.]  The audience gasped at his remark and Filkoff shot back, “Thank you for that, Commissioner Corbett.”  Somewhat under his breath Corbett replied, “If you have a problem with that, I apologize.”

Mayor Pelican restored order and returned commissioners to the topics under discussion.  For her part, Pelican expressed reluctance to take on new projects when many of the city’s current problems have arisen from the lack of a maintenance plan.  She appeared to favor taking care of problems the city currently has with restrooms in the Martin Luther King Recreation Center and the sewer system in Old Town.

When asked to weigh in, Manager Gerrity declined to engage in the discussion, stating that this was the commission’s business to decide how to spend the borrowed money or to return it.

Ed Stull, the city’s bond counsel, advised that the city cannot return money and then draw on it when they need it.  The city is paying interest on the money at a rate of 2.43%.  Stull read parts of the resolution authorizing the loan and indicated that it might be possible to spend the money on items such as the Humane Society Shelter (if it were to be owned by the city), the purchase of waterfront property and improvement of rail crossings and/or sewers.

Boner indicated that he would like to see if other interests could be persuaded to pay for or help pay for railroad improvements, such as potential developers, the Ocean Highway & Port Authority or the railroad itself.

Filkoff asked if it was the commission’s intent to lower the franchise fees if the money were returned, since the only reason the fees were raised was to pay back the loan.  There was no clear response.  Boner suggested, however, that by keeping the franchise fees at their current rate, ad valorem rates might not need to rise as much.

Commissioner Pat Gass came out against any reprogramming of borrowed funds and supported returning all unspent funds.  Referring to this loan amount as “tainted money” she said that during her campaign people were in an uproar that the money had been borrowed without a referendum.  She said that she preferred to avoid interest payments and when the city is prepared to move forward on any specific project, ask for a referendum on that particular project.  She also seemed surprised to learn that the city had borrowed $1.884M, not $6M.

Additional discussion raised questions about the Main Beach Boardwalk (covered by a general obligation bond, nor Forward Fernandina money), seed money for the CRA ($300K not $450K), and the requirements for a quiet zone to be established in cooperation with the railroad.  There also seemed to be confusion among some commissioners over the engineering and permitting work to improve Front Street (funded in the strategic plan) vis-à-vis a waterfront park (not funded in the strategic plan).  Commissioners seemed to agree that opening the Alachua rail crossing is a good idea if the city does not need to pay for it—or at least not pay for it now.

With the help of City Comptroller Patti Clifford, commissioners were able to determine that roughly $1M of the borrowed $1.883M loan had not yet been spent or committed.  Boner tried in vain to get consensus from the commissioners on the next steps.  Commissioners appeared to hold significantly different opinions:

There is one thing that is absolutely clear:  there is no consensus and city staff received no guidance for going forward.